MSNBC's Rachel Maddow tried last night to serve up a justifiable rationale for this churlish refusal and instead made a laughable analogy.

As she's often inclined, Maddow played schoolmarm to her credulous viewers and told them the stirring tale of President John F. Kennedy standing up to the Soviets after they placed nuclear missiles in Cuba. Kennedy managed to avoid war, though Maddow neglected to mention the secret deal he cut with the Russians to withdraw US missiles from Turkey. But for a terrifying two weeks, "we were on the brink," she said.

Twenty-five years later, at an ICBM site in Wyoming, the launch sequence for a Minuteman III nuclear missile was accidently triggered, Maddow recounted. A hastily assembled emergency team decided to park a huge personnel carrier on top of the 90-ton blast door over the silo, just in case.

"If all else fails, why not try that?" Maddow said. "Bad stuff happens. Even potential end of the world stuff. Sometimes it does happen."

As it did in October 1962 ... and again 25 years later in Cheyenne ... and again this week when the American people elected Trump. Or so Maddow wants you to believe.

And what will you do in response, she challenged her audience."Well, if history is any guide, what we do in this country is we improvise, America. We do what we can. Somebody figure out a way to MacGyver this thing." (Yeah, she says this like that).

Which is what is needed now, Maddow suggested, since Trump's ascension. After all, based on his remarks during the campaign, Trump has no respect for an independent judiciary and free press, a professional military, openness to immigration, religious tolerance, the peaceful transition of power -- "And it's stuff we must keep and protect if we are to stay who we are as a country."

With a nod to the anti-Trump protesters passing her window at Rockefeller Center en route to the Trump Tower, Maddow made her earnest pitch --

We've faced crises before as a country. Sometimes they're, you know, malfunctions. Sometimes they're the brink of nuclear war. Most times it's somewhere in between. But we rise to the occasion, we always do. We improvise, we do what we can, we step up. There are protests on the streets tonight, big ones (Maddow making an approving sideways glance). There's controversy already over how the president-elect is treating the press on his trip to the White House tomorrow. There are doomsday plans going into action all over this country right now in terms of civil rights. ... It's a big to-do list. Stay with us, seriously.

One major drawback to her analogy -- we're not living through a crisis. October 1962 -- that was a crisis. The nuclear missile almost launched by accident in 1987 -- that qualifies too. Trump getting elected? The only crisis we'll see will be if the Left creates one -- which it is so obviously determined to do, aided and abetted by self-professed non-polemic propagandists like Maddow. 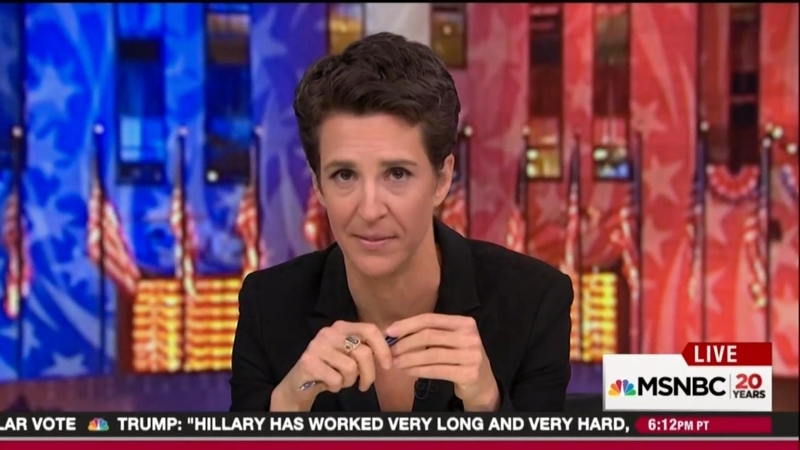 Look at the feeble evidence she cites to conjure a crisis -- "There's controversy already over how the president-elect is treating the press on his trip to the White House tomorrow." Imagine that -- he's not on bended knee. Is this usurper not aware that deference must be paid?

Then there was this -- "There are doomsday plans going into action all over this country right now in terms of civil rights."  Specifically for those willing to relocate to agricultural communes in Guyana. Not to worry about accommodations, the Clinton Foundation is already breaking ground.

If and when the crisis that liberals are hellbent on triggering does come about, rest assured they'll blame Trump for creating a climate of hate that justifies their actions. He made me do it is the feeble defense of a toddler. When it comes from adults who should know better, it's pathetic.