Truly bad sign for the Clinton campaign when one of their most reliable apologists in media denounces Hillary Clinton while also -- wait for it -- effusively praising Donald Trump.

Mika Brzezinski's surprising twofer came on today's Morning Joe in response to Trump's handling of a New York Times story over the weekend alleging that he may have legally avoided paying federal incomes taxes for nearly two decades after suffering a $916 million business loss in 1995.

Clinton pounced on the story and cited it during a campaign stop as another example of why Trump can't be trusted with the presidency. Brzezinski wasn't buying it --

BRZEZINSKI: Last night while campaigning in battleground Ohio, Hillary Clinton seized on the New York Times story accusing her rival of being a, quote, poster boy for the same rigged system that he's railing against.

A clip was shown of Clinton on the stump saying Trump "apparently lost a billion dollars on bad investments and failing casinos." This struck Clinton as somehow beyond belief, since it is a truth universally acknowledged that casinos always make money for their investors, without fail, everywhere, except on those frequent occasions when they don't. "Ask yourself this -- who loses money on casinos?" Clinton asked sarcastically. "Really?!" So much for food stamps and jobless benefits as inherently stimulative -- here's where Uncle Sam oughta be throwing taxpayers' money by the bucketful.

BRZEZINSKI: So, I just noticed a confidence that I don't think should be there among the campaign -- sorry. But, I mean, I think about this tack and -- were laws broken? Did the New York Times find that any laws were broken? Were any laws broken? (chorus of "no" from others). OK, so he talks about brilliantly using the system -- right. Hillary Clinton could have had that same reaction to her speech money, that she says she's going to change Wall Street. But you know what, I use the system to make millions of dollars. But instead she hides it. Donald Trump just doesn't hide it. He's very comfortable with the fact that he followed the law and made a lot of money.

She also followed the law and made a lot of money and for some reason it's OK to look at that speech money and somehow we just let it go because she's, her campaign keeps it kind of under -- it's the same thing, and that's what people see! People see somebody being honest about it and someone kind of like, not mentioning it but still doing it. What's the difference? Does anyone want to explain to me because I think voters like what they saw from Trump and I'm very worried about that. 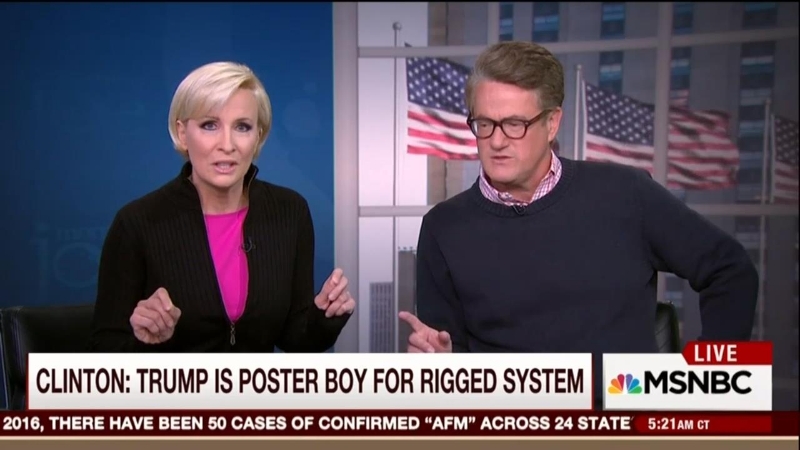 Brzezinski, daughter of former national security adviser Zbigniew Brzezinski under President Carter, was even more forceful on this minutes later -

BRZEZINSKI: I just tell you, I'm watching these two candidates and there's one that kind of keeps doing this thing that penetrates the ether, the people are hearing, they feel, the truth from Donald Trump.

BRZEZINSKI: And I think the reaction to this New York Times story on Donald Trump's part was brilliant. And the thing is, he didn't even think twice about it. He just went there while she has been hiding the speech money, hiding this foundation stuff, hiding this email stuff and trying to get around it, mistakes were made. And I'm telling you, people don't, they are not feeling a complete connection with her and this doesn't help to get all high and mighty. Get off your high horse about this tax thing. Unless laws were broken, it's not an issue.

Having committed such an unpardonable sin, Brzezinski might want to consider hiring security personnel for future forays to cocktail parties in Manhattan.