The word "illegal" is also a challenge for them as shown by their unwillingness to utter the dreaded term "illegal immigrant."

Add "live" -- as in, "live" interview -- to the growing list of seemingly simple words that liberals struggle in vain to comprehend.

An example of this was on bold display Friday night during Rachel Maddow's interview with Hillary Clinton, which MSNBC had trumpeted all week.

At the end of the show on Friday evening preceding Maddow's, the equally cringe-inducing All In With Chris Hayes, Hayes had interviewed Kaci Hickox, the so-called Ebola nurse, when he gushed to Maddow about her interview with Clinton that he and others at MSNBC had already watched --

HAYES: The Rachel Maddow Show starts right now with -- and this is very, very exciting -- her exclusive interview with presidential candidate Hillary Clinton, her first since yesterday's marathon Benghazi hearing, you do not want to miss it. I have seen it live while it was happening, in the building, and believe me it's fantastic. Everyone on the fourth floor, Rachel, we were all watching it live. It was, it was really great. I am very excited for folks to see this.

While Hayes made his carnival barker's pitch, a caption reading "LIVE MSNBC" could be seen in the lower right corner of the screen, presumably to indicate that the broadcast was taking place in real time. In her response to Hayes, Maddow also established that her interview with Clinton had already taken place --

MADDOW: I came back to my office as soon as we were done taping the interview and they said, Chris Hayes watched it here! He was watching it in the room! (Elvis has not left the building!) And I said, well, did he like exclaim or make any noises? And they said, when she said the word pathetic, he went ooohhh! And I was like, we gotta use that! Pathetic! Coming up!

During the back and forth between Hayes and Maddow, the "LIVE MSNBC" caption remained visible on the screen, an apparent indication that the Maddow show too, like Hayes' before her, was airing live and had not been recorded.

Then came time for the interview itself, but not until Maddow told viewers about the status of Hurricane Patricia barreling into the coast of Mexico, followed by her saying this --

MADDOW: The other thing we are keyed into this Friday night is that I have just had my first interview ever with Hillary Clinton, the Democratic presidential frontrunner. I should confess that I did shake her hand once and I said hello once at a State Department function years ago where I had no idea what I was doing there. But apart from that Hello Madam Secretary and shaking her hand, today was the first time that I have ever met Secretary Clinton and it is certainly the first time that I have ever had the chance to interview her and this is the first interview with anyone that she has had since her marathon, 11-hour, Benghazi hearing testimony yesterday. It's also the first interview that she has done since Vice President Biden decided that he would not run against her for the Democratic nomination for president.

Without further ado, here is Secretary Clinton today on whether Joe Biden might have actually made the more enviable decision when it comes to the run for the presidency this year.

Then Maddow, in what appeared to be the studio she uses for her show, asked the Biden question to Clinton, who cackled and exclaimed, "That's a really good question!"

Even though Maddow only moments earlier had said she came back to her office "as soon as we were done" with the interview, and after Hayes had described watching it, after all of that the caption in the lower right corner of the screen inexplicably remained in place-- "LIVE MSNBC." Where it stayed for the entirety of Maddow's predictably schmoozy interview with Clinton, even after both Hayes and Maddow had established that the interview could not possibly be "live" at that point. 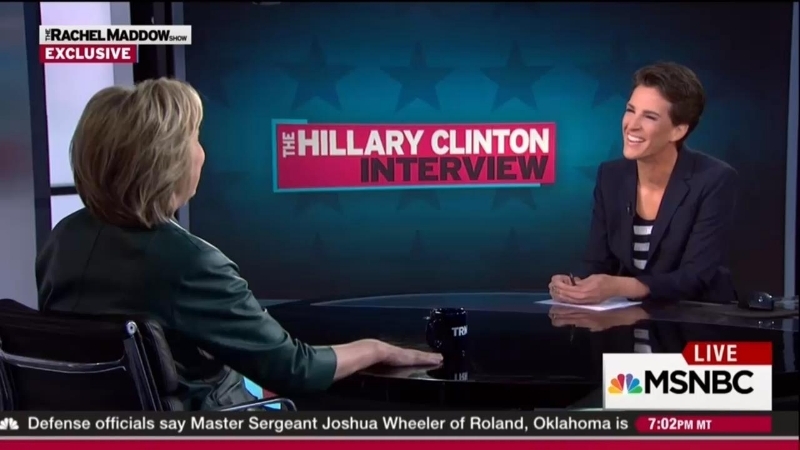 How difficult would it have been for the network to replace the bogus "LIVE MSNBC" caption with an indisputably accurate one reading "RECORDED EARLIER TODAY"?

Yes, viewers watching the Maddow show from start to finish would have known the Clinton interview was recorded before the program began -- but those tuning in at any point during the interview itself would have been falsely led to believe that Hillary Clinton of all people, with her visceral fear and loathing of media scrutiny, was actually being interviewed ... live!

I can hear the apologists now -- much ado about nothing ... close enough, Maddow had just talked to her ... what difference at this point does it make?!  Apparently enough of a difference for MSNBC to make a conscious decision to present the Clinton interview as live when it was no such thing. How fittingly Clintonian -- it all depends on how you define "live."

Bad enough that the word "exclusive" has been rendered meaningless through repeated misuse, to the point that it indicates little more than the person being interviewed is not talking with anyone else at that moment. MSNBC has shown its willlingness to claim an interview is being conducted live when it's already in the can because, heck, everyone knows live TV is edgier.

Suffice it to say the prerecorded interview approach helped Clinton. In the unlikely event that anything damaging was uncovered by Maddow, a distinct possibility when actual journalism is practiced, it most assuredly would never see the light of day beyond MSNBC.