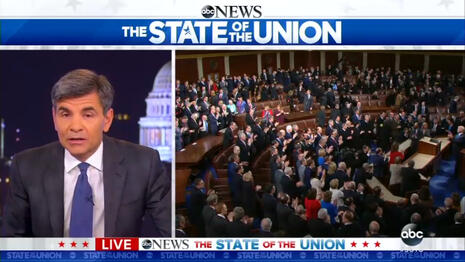 Expect Team Biden (also known as CNN/MSNBC/ABC/CBS/NBC/New York Times) to offer the verbal equivalent of a standing ovation after Joe Biden delivers his first joint address to Congress on Wednesday. But even if it doesn’t approach the adoring coverage former President Barack Obama received, it will certainly be friendlier than the throttling the press gave former President Donald Trump’s State of the Unions.

The following is a look back (via the MRC’s archives) at how the media trashed Trump’s State of the Union speeches as “psychotically incoherent” tirades “full of lies” and even “dog poop”:

No Way Trump Is Smart Enough To Know Those Big Words

“The way President Trump speaks extemporaneously, is not the same as what he said tonight. It sounded, to me, and this is just — I mean, I thought it was — he sounded very presidential. This was a speech written by a college student for someone else trying to use big words to impress that the person who is reciting it did not know the meaning of the words. That’s how it sounded.”
— Host Don Lemon discussing Trump’s address to Congress on CNN Tonight, March 1, 2017.

Host George Stephanopoulos: “One thing is pretty clear, Jon. He did not unify that chamber tonight.”
Correspondent Jonathan Karl: “George, I’ve never seen anything like it. Right now, the Democrats have basically run for the exits. I mean, usually when the President leaves, you still have members applauding. He did not unify this chamber, particularly on the issue of immigration. Not a single Democratic applause on his immigration proposal.”
— Exchange during ABC News live coverage of the State of the Union speech, January 30, 2018.

“Calling this a healing speech is almost like calling, going on a diet by drinking a Diet Coke and eating a pizza. That’s as much of a healing speech this was....”
— ABC News political analyst Matthew Dowd during live coverage of the State of the Union speech, January 30, 2018.

“Church...family...police... military...the national anthem...Trump trying to call on all the tropes of 1950s-era nationalism. The goal of this speech appears to be to force the normalization of Trump on the terms of the bygone era his supporters are nostalgic for. #SOTU”
— January 30, 2018 tweet by MSNBC’s AM Joy host Joy Reid.

“I don’t remember a time when you would watch a State of the Union address being delivered by a President who is, I guess you could say, actively betraying the country.”
— Political analyst Ron Reagan Jr. on MSNBC’s live coverage of the State of the Union, January 31, 2018. (12:53am ET).

Host Chris Matthews: “It almost got ugly. Very tough about saying immigrants are basically killers. MS-13. Beginning a discussion about immigration in a country of immigrants with crime. And that was his way of opening up the discussion like I’m protecting us from criminal elements. I thought that got very ugly about that point.”...
Political analyst Eugene Robinson: “I thought he was demagogic on immigration. I mean, that’s when the speech got sort of dark.”
— MSNBC’s live coverage of the State of the Union speech, January 31, 2018.

“Blood-Soaked” Speech Full of “Hate and Lies” and “Dog Poop”

“I saw this as a psychotically incoherent speech with cookies and dog poop. He tries to put together in the same speech these warm kind things about humanitarianism and caring about children. At the same time, he is demonizing people who are immigrants in a way that was appalling.”
— CNN analyst Van Jones during CNN’s post-State of the Union coverage, February 5, 2019.

“You would think after the longest shutdown he might temper his language, but it was as blood soaked and lawless and fantastical in terms of the relation to the truth as ever.”
— New York Times columnist Frank Bruni on Comedy Central’s post-State of the Union address edition of The Daily Show with Trevor Noah, February 5, 2019.

“[The State of the Union speech] is shaping up to be a night of absurdist theater....Absurd because the President is seemingly going to act like everything is normal, despite a cracked up cabinet, despite his ongoing feud with the intel community, countless investigations into him, his staff, his campaign, his business, and even now his inauguration.”
— Host Chuck Todd on MSNBC’s MTP Daily, February 5, 2019.

“Yes the President had some heartwarming moments during this speech but he was also engaging in some deeply divisive rhetoric aimed at immigrants, aimed at Latinos. And while, yes, he was trying to make appeal to the African-American community it can’t be forgotten he was awarding the Medal of Freedom to Rush Limbaugh, who has a history of making derogatory comments about African-Americans.”
— Correspondent Jim Acosta on CNN’s post-State of the Union coverage, February 4, 2020.

“It [presenting Rush Limbaugh with Medal of Freedom] was the President trolling the Democrats....Honoring Rush Limbaugh, in that moment....to do it on the House floor was definitely a finger-in-the-eye of [Nancy] Pelosi, a finger-in-the-eye of the Democrats.”
— NBC’s Meet the Press moderator Chuck Todd during NBC News post-State of the Union coverage, February 4, 2020.