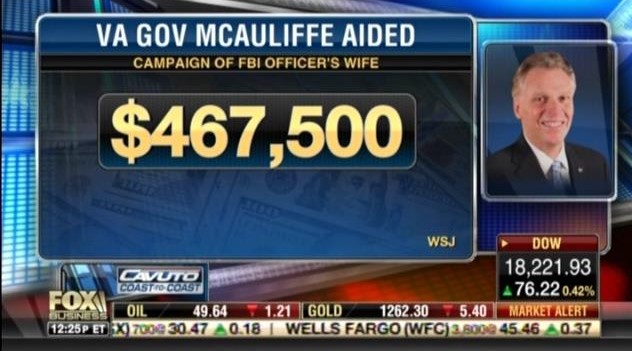 This stunning revelation, despite being reported in a front page story in Monday’s edition of The Wall Street Journal, didn’t receive any time on the Big Three network (ABC, CBS, NBC) morning shows.

The Wall Street Journal’s Devlin Barrett, in the October 23 online version of the story, reported the following:

The political organization of Virginia Gov. Terry McAuliffe, an influential Democrat with longstanding ties to Bill and Hillary Clinton, gave nearly $500,000 to the election campaign of the wife of an official at the Federal Bureau of Investigation who later helped oversee the investigation into Mrs. Clinton’s email use.

The Virginia Democratic Party, over which Mr. McAuliffe exerts considerable control, donated an additional $207,788 worth of support to Dr. McCabe’s campaign in the form of mailers, according to the records. That adds up to slightly more than $675,000 to her candidacy from entities either directly under Mr. McAuliffe’s control or strongly influenced by him. The figure represents more than a third of all the campaign funds Dr. McCabe raised in the effort.

The questionable donation, so far, has yet to be reported on the Big Three networks but was covered on Fox News Channel (FNC) and Fox Business Network (FBN). FBN’s Neil Cavuto and Blake Burman discussed the matter on the October 24 edition of Cavuto: Coast to Coast:

NEIL CAVUTO: Meanwhile, Virginia's governor giving money to an FBI official's wife. She was running for the Virginia state senate. She later lost but not before getting $600,000 plus, and her husband —  a very influential FBI figure in the Clinton e-mail probe. Can we say awkward? Well, the governor of Virginia and those involved say, no, nothing untoward or unusual going on here. Blake Burman sorts it all out. Hey, Blake.

BLAKE BURMAN: Hi there Neil. Yeah, the number that is raising more questions is $467,500. According to The Wall Street journal, the political action committee of Virginia governor Terry McAuliffe donated that amount, just shy of $470,000 last year to Dr. Jill McCabe's state senate race. Now here’s how the connections break down:

Governor McAuliffe, he is a longtime confidant of Bill and Hillary Clinton. Dr. McCabe is the wife of Andrew McCabe who at the time was the associate deputy director of the FBI. Now, Dr. McCabe eventually lost her state senate race, and after that defeat her husband was promoted to the deputy director of the FBI which put him into an oversight role of the department's investigation into Hillary Clinton's e-mail practices at the State Department.

The FBI, we reached out to them for a statement, they are downplaying this connection, Neil, saying in a statement that McCabe basically was insulated from his wife's race. Here was the quote, in part, that they gave us. They say “during the the campaign he played no role, attended no events and did not participate in fundraising or support of any kind.” That's the statement from the FBI. However, some would question whether nearly half a million dollar donation was basically disguised to exert pressure on the FBI.