If Lester Holt Really Wanted to Be Fair and Balanced... 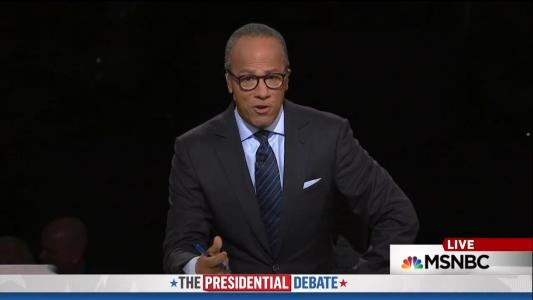 NBC Nightly News anchor Lester Holt, at Monday night’s debate, repeatedly cross-examined and fact-checked GOP nominee Donald Trump. However, for Hillary Clinton there was not one single challenge to anything she said. And there wasn’t a hard-hitting question to the Democratic nominee on any of her controversies whether it be Benghazi, the Clinton Foundation or the e-mails.

If Holt had correctly done his job as moderator he could’ve asked a tough question of Trump and then pivoted to ask an equally challenging question to Clinton. The debate might have gone completely different if he had.

Listed below are questions actually asked by Holt, followed (in italics) by questions he could have asked Clinton, if he had any interest in being fair and balanced:

HOLT: Mr. Trump, we’re talking about the burden that Americans have to pay, yet you have not released your tax returns and the reason nominees have released their returns for decades is so voters will know if their potential president owes money to, who he owes it to and any business conflicts. Don’t Americans have a right to know if there are any conflicts of interest?

HOLT: Mrs. Clinton, questions have been raised about the Clinton Foundation raising money from foreign entities that had business before the State Department while you were Secretary of State. Voters need to know their potential president owes money to, who he or she owes it to and any business conflicts. Don’t Americans have a right to know if there are any conflicts of interest?”

HOLT: Mr. Trump, for five years, you perpetuated a false claim that the nation’s first black president was not a natural born citizen. You questioned his legitimacy. In the last couple of weeks you acknowledge what most Americans have accepted for years, the President was born in the United States. Can you tell us what took you so long?

HOLT: Mrs. Clinton you said that quote: “You could put half of Trump’s supporters into what I call the ‘basket of deplorables’. Right? The racist, sexist, homophobic, xenophobic, Islamaphobic — you name it.” A Washington Post taken after you made that statement found 65 percent said it was “unfair” to describe a quote “large portion” of Trump supporters in that way? Mrs. Clinton how do you expect to unite this country with such language?
...

HOLT: Our next segment is called Securing America. We want to start with a 21st century war happening every day in this country. Our institutions are under cyber attack and our secrets are being stolen. So my question is who’s behind it and how do we fight it? Secretary Clinton, this answer goes to you. How can Americans expect you to take a lead in such an important fight when you, FBI Director James Comey called you quote “careless” in your storage of classified e-mails on a private server?”

...
HOLT: Mr. Trump, with a lot of these are judgment questions. You had supported the war in Iraq before the invasion. What makes your judgment. Why is your judgment any different than Mrs. Clinton’s?

HOLT: Mrs. Clinton, your State Department was accused of not paying attention to warnings of a potential attack, prior to the Embassy bombing in Benghazi that left four Americans, including Ambassador Chris Stevens, dead. Additionally, the State Department was accused of scrubbing CIA talking points, in the aftermath of the attack. Don’t these issues go to the question of your judgment in a crisis situation?