Did NBC Sit on Guccifer Claims on Hacking Hillary Server? 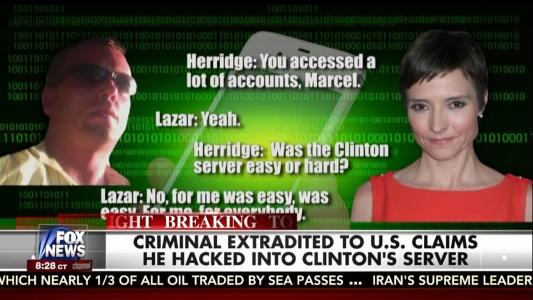 Romanian hacker Marcel Lazar AKA “Guccifer” told FNC’s Catherine Herridge that accessing Hillary Clinton’s server was “easy. For me, for everybody.” But Herridge, who appeared on Wednesday’s Kelly File to discuss the bombshell accusation, wasn’t the only reporter with the story.

A May 5 NBC News online story reported the Romanian hacker revealed “in an exclusive interview” with correspondent Cynthia McFadden that Clinton’s server was “like an open orchid on the Internet.” However, as PowerLine’s Scott Johnson pointed out, “NBC interviewed Guccifer during his pre-extradition detention in Romania. That means the reported interview took place at least a month ago.”

According to the online article, the interview will be featured on tonight’s (Thursday’s) edition of NBC Nightly News. But the questions have to be asked: did FNC’s report force NBC to finally air the interview and why did they sit on it, initially?

The following is the relevant portions of Herridge’s report as it was aired on the May 4 edition of FNC’s The Kelly File:

CATHERINE HERRIDGE: Fox News first wrote to the hacker on April 19th as part of our ongoing reporting of the Clinton e-mail investigation. After we met with him in a Virginia jail. We followed up in a series of phone calls where he allowed us to record the conversation for broadcast. Forty-four-year-old Marcel Nazar claimed it happened in early 2013.”

HERRIDGE TO LAZAR: You accessed a lot of accounts, Marcel.

HERRIDGE: Is the Clinton server easy or hard?

LAZAR: No, for me was easy, was easy. For me, for everybody.

HERRIDGE: He was extradited to the U.S. from Romania last month to face trial in Alexandria, Virginia, for cyber crimes. One of his alleged victims is longtime Clinton aide Sydney Blumenthal. After researching his target, Lazar told Fox he accessed the account by guessing Blumenthal’s security question. Then he sent content from the account to the media. And for the first time publicly exposed the Clinton e-mail address.
...
HERRIDGE: While Lazar’s claims cannot be independently verified, three computer security told Fox the Clinton server, now in FBI hands, may have an electronic trail that would confirm or disprove his claims.