NBC’s Andrea Mitchell must be so proud. Her defense of Hillary Clinton, on Sunday’s Meet the Press, was actually played to the former Secretary of State during her Benghazi testimony by Democratic Congresswoman Linda Sanchez. Sanchez also quoted The Washington Post’s “fact-check” page to the current Democratic frontrunner.

For her part, Clinton seemed very pleased by these defenses by the liberal media.

The following is a transcript of the relevant exchanges as they were aired during FNC’s live coverage of Clinton’s October 22 testimony:

REP. LINDA SANCHEZ: This weekend one of our colleagues on this panel, Mr. Pompeo, went on Meet the Press and I wonder if we can cue up the video. He had this exchange. Can we please play the video clip?

REP. MIKE POMPEO: Mr. Blumenthal. It goes directly to the security issue. We see now former Secretary [Hillary Clinton] relied on Mr. [Sydney] Blumenthal for most of her intelligence. That is she was relying- 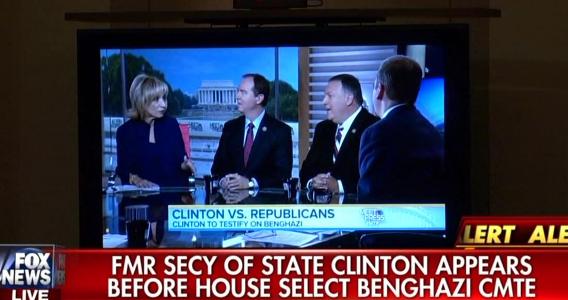 ANDREA MITCHELL: That is factually not correct.

POMPEO: No it is absolutely factually correct.

MITCHELL: Relied on Mr. Blumenthal for most of her intelligence?

POMPEO: Take a look, take a look at the e-mail trail and you will see-

MITCHELL: That’s just - I cover the State Department that is just factually not correct.

SANCHEZ: That clip, for me, it just, it just defies all logic. And I think Andrea Mitchell correctly called him out on something that was a falsehood. Secretary Clinton what did you think when you heard that clip?

CLINTON: Well that it was factually untrue.
...
SANCHEZ: With your answer that you believe it to be factually incorrect I just want to add that the Washington Post fact checker immediately awarded that claim four Pinocchios, which is the worst rating possible. And I’m gonna quote the Post on what they said about that quote. “Looking at her private emails is just part of the picture and it ignores the vast amount of information, much of it classified, that is available to the Secretary of State.” Secretary Clinton would you agree with that statement from the Washington Post?

CLINTON: Yes I would.