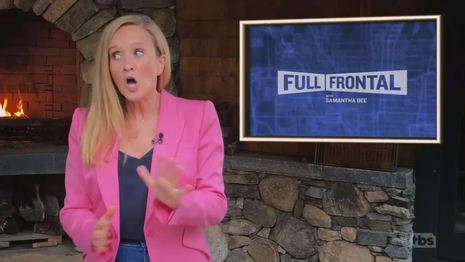 In a story broken by Variety on Monday morning (and confirmed by the show), TBS cancelled Full Frontal With Samantha Bee after seven years spewing leftist venom under the supposed guise of comedy and eliciting laughs even though it accomplished neither and, by its final episode, was the second-least-watched late night show (and over 1.5 million behind FNC's Gutfeld).

Variety’s Brian Steinberg said Full Frontal received “a kick in the rear from Warner Bros. Discovery” even though it “became a signature program for...TBS.”

In a network statement provided to Steinberg, TBS said they “made some difficult, business-based decisions” as part of “shap[ing] our new programming strategy.”

TBS added they were “proud” of the “extraordinarily talented cast and crew” for having done “groundbreaking work” and wished them the best in searching out “new opportunities.”

Steinberg fawned over Samantha Bee as having “brought an aggressive and saucy voice to TV’s late-night arena” following a stint with Comedy Central’s The Daily Show under Jon Stewart.

Full Frontal acknowledged in a statement that they won’t be returning and said they were “thankful for our loyal audience, our amazing team, and that we got to annoy the right people every week—that there wasn't wrestling or baseball or a very special episode of Big Bang.”

Taking one last shot at former President Trump’s video message on January 6, the show added: “To our loyal fans - we love you, you’re very special. Go home, and go home in peace.”

A few minutes later, it cracked another supposed joke: “Full Frontal is leaving TBS to go spend more time with her family.”

As we wrote here, Bee’s early episodes began with pure venom and dangerous discourse in early 2016, such as arguing Senator Marco Rubio (R-FL) was part of a “cabal of fetus fanatics,” said the Benghazi hearings led by “Benghazi queen” Trey Gowdy were meant to “block the cock of democracy,” mocked Mitt Romney’s Mormon faith, and prayed that National Rifle Association (NRA) employees would be beset by boils.

Bee found herself in light trouble with her fellow leftists on May 30, 2018 when she leveled a vile slur against Ivanka Trump by referring to her as a “feckless c***.”

While the TBS host was forced to apologize a day later for “inappropriate and inexcusable” language, Bee made clear she didn’t mean it as, in December 2019, she told NBC that she “didn’t learn much” from that incident.

Fastforward to what ended up being her final show and she went out as she began by threatening the lives of her political adversaries by demanding conservative Supreme Court justices be harassed in public and offering a Twitter hashtag for it (#RaiseHell).

Bee never received a proper finale and was unceremoniously axed, but don’t expect her to be down for long. Given how much of the liberal media not only dislikes but hates anyone not in full submission, there will always be a network or outlet to offer up a place for Bee.

To see more of Bee's worst moments from this tire fire of a show, check out the special edition of Notable Quotables from our Geoff Dickens here.