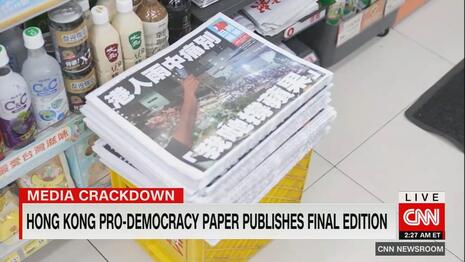 In a column published in the Sunday print edition for the Philadelphia Inquirer (posted online Thursday), longtime foreign policy columnist Trudy Rubin compared the murderous and concentration camp-running Chinese Communist Party to the Republican Party, saying the right’s opposition to the destructive For the People Act was just like China killing Hong Kong’s pro-democracy newspaper.

Syndicated across the country, Rubin’s hateful and poisonous screed served as a reminder of how liberal elites have nothing but dangerously cartoonish views of anyone and everyone who disagrees with them, equating the American right to perhaps the most dangerous political group on the planet.

The headline seemed innocent and intriguing (“What Americans should learn from China’s shutdown of Hong Kong’s last pro-democracy newspaper”), but the lede was anything but: “As Senate Republicans were blocking a bill to expand voting rights for Americans, the Chinese government was destroying Apple Daily, the pro-democracy tabloid that campaigned for greater voting rights in Hong Kong.”

Yes, that’s right. The GOP opposing the nationalizing of our electoral system and publicly funding campaigns (among other measures) was just like the Communist Party shuttering a pro-democracy newspaper, arresting its leaders, and freezing their assets.

Undeterred, Rubin doubled down on her analogy:

The comparison is worth making, because of the way China has systematically shredded Hong Kong’s democratic freedoms over the last year. Under cover of a new national security law, and COVID-19, Beijing has diminished voting rights, while arresting pro-democracy activists and muzzling the media.

She added that last week’s events should serve as “a sharp reminder of the current threats to America’s democratic institutions” seeing as how “our threats” come from tens of millions of Americans “undermining the concept of free and fair elections in an effort to rig the system in their favor.”

These false claims came despite the fact that liberals and their media allies have insisted the For the People Act had to become law in order for Democrats to continue winning elections.

Again, it’s truly fanatical for someone with decades of foreign policy experience to suggest that supporting voter ID and opposing ballot harvesting equates to being just as genocidal as the government that’s trying to kill off every last Uighur Muslim and murdered millions in its 72-year reign.

The rest of the column reverted back to the headline and admirably recapped the history of Apple Daily, founder Jimmy Lai, and their support for a democratically-elected government built on the will of the people.

But a look at the tragedy that befell Apple Daily should remind us we must keep fighting to preserve and protect the election freedoms we are lucky enough to still possess.

Apple Daily’s owner, Jimmy Lai, fought to preserve democracy even though he was a midsize David against a huge Beijing Goliath. He knew he might wind up – as he has done – in jail.

Yet even Lai never expected Hong Kong’s near-democracy to be crushed so swiftly – nor his newspaper to be shuttered.

A wealthy clothing tycoon, he founded Apple Daily in 1995 as a tabloid that combined scandal with anticorruption investigations of local officials, and with constant attacks on China’s Communist Party. Rather than enjoy his riches, and keep his mouth closed like most Hong Kong businessmen, he fought for voting rights.

The scrappy Apple Daily, one of the most widely read papers in Hong Kong, constantly campaigned for expanded suffrage. Beijing had promised this expansion in Hong Kong’s Basic Law, when the territory was returned by Britain to China in 1997. The law included gradual expansion to universal suffrage for choosing Hong Kong’s chief executive, a promise Beijing kept delaying and now has junked.

When I met Lai in November 2019 at his airy, sunlit home on a Hong Kong hillside, his paper was a major supporter of the huge pro-democracy protests that had exploded over a proposed law to allow extradition of Hong Kongers to be tried in mainland Chinese courts. Hong Kong democrats prize their independent courts, which operate under a British common law system, not Communist Party control.

And Beijing jailed Lai last year under the new security law. Earlier this month, hundreds of police officers raided the paper’s newsroom, seizing computers, freezing its assets and arresting top editors and one of its columnists. The newspaper was finally forced to close Wednesday.

He urged that Americans stand up for those values, as an exemplar for others who espoused them for their own people. “America should not be ashamed of its moral authority, of its values. Express them.”

Rubin circled back to her ironic, CNN-like disgust for an opposition party in America, lamenting that Lai’s “example should remind us of pro-democrats in Hong Kong who still hope for America to set a democratic example, even if it can’t rescue them from despots in the short run.”

Citing the January 6 riot and “the stain of the GOP Big Lie,” she concluded by wondering if America could go the way of China if Americans refuse to stand up like Lai as he “continue[s] the fight for democratic values against odds that dwarf ours.”

Just as we’ve seen with the gaslighting over which party is defunding the police, the liberal media will be ruthless in maligning the character of anyone who dares to stand in their way.