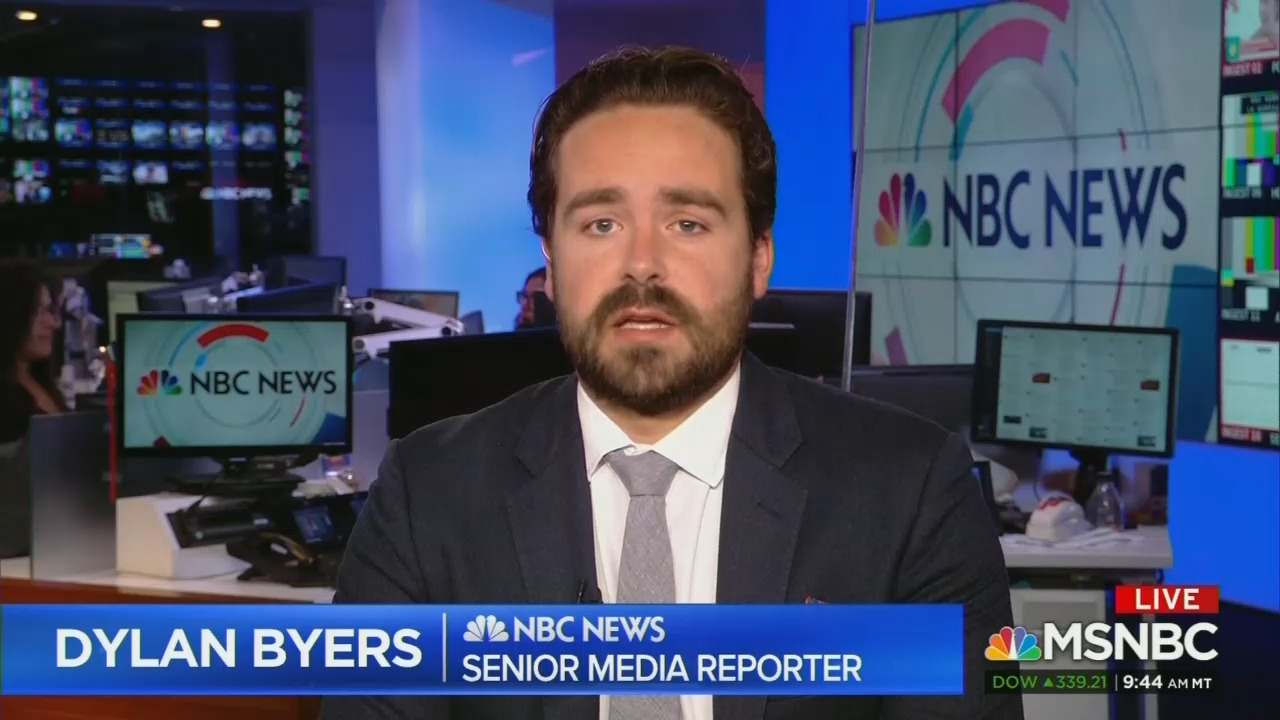 Late Monday morning on NBCNews.com, former CNNer and current NBC senior media reporter Dylan Byers bemoaned how social media sites have become “a minefield for journalists” where they face “perils” such as “stray[ing] from reporting” and thus “opening news organizations to accusations of partisan bias.”

So, in essence, Byers took to NBCNews.com to complain about how liberal journalists tweeting liberal things that lead to those dastardly articles in which “conservatives pounced” and “conservatives seized” on a hot take. Or, in other words, it’s a plea for journalists to better disguise the liberal tilts.

Byers’s piece honed in on Politico editor-in-chief John Harris’s dust-up last week as he tweeted that he “thought that job had been filled” as a shot at President Trump in response to a white supremacist telling NBC News that he wanted to “take over the GOP.”

Instead of address the bias, Byers bemoaned the hit to Harris’s reputation (click “expand,” emphasis mine):

Politico editor-in-chief John Harris has spent nearly three-and-a-half decades in American political journalism, building a reputation for himself as a fair and high-minded reporter and, perhaps more importantly, helping to create a media organization that wields significant influence in Washington while commanding the respect of both Democrats and Republicans.

So when Harris became a target of conservative criticism last week due to a tweet that the Republican National Committee Chairwoman Ronna McDaniel described as an "offensive statement," and "an example of why distrust in the media is at an all-time high," it left a few of his staffers feeling disappointed and perplexed. Some current and former Politico staffers who spoke on the condition of anonymity so they they could speak freely about their employer expressed confusion and disappointment about Harris’ tweet.

The criticism came quick: Former White House Press Secretary Sean Spicer called it a "partisan attack," while GOP operative Arthur Schwartz said Republicans should not take calls from Harris or his reporters "until this guy is gone from Politico" — critiques that also happened within the Twittersphere.

Sad trombone! It seems as though Byers wasn’t a fan of the notion that words matter and hurt your reputation.

Nevertheless, Byers persisted, fretting that Harris’s case “served as a reminder of the perils journalists face on Twitter, where there is a temptation to stray from reporting and share jokes and opinions” and how it only takes “[o]ne errant observation, or a thought improperly word” to trigger “a firestorm” that “inadvertently expose[s] their own biases to the world.”

Byers discounted any notion of journalists being way out on the left, declaring that “[a] lot gets lost on Twitter, which makes one wonder why a journalist of Harris' caliber was quipping on Twitter in the first place.”

Byers also outlined the case of New York Times Magazine writer Emily Bazelon, who was still allowed to write a supposedly objective news story about Brett Kavanaugh during his nomination despite offering tweets stating her disdain for the Judge.

It also mocked a suggestion by Politico co-founder Jim VandeHei (who’s now the co-founder and CEO at Axios) that “[n]ews organizations should ban their reporters from doing anything on social media — especially Twitter — beyond sharing stories” to avoid any “snark, jokes, and blatant opinion” that “makes it impossible to win back the skeptics.”

Here’s part of how Byers responded to that (click “expand”):

While other news executives aren't nearly as extreme in their view of Twitter as VandeHei, many are wary of social media's potential to undermine their organization's reputation and credibility. Many editors also chafe when they see reporters who are expected to be fair and nonpartisan fire off a pithy bit of snark or opinion, or get mired in a zero-sum debate with their critics. And the more notable a journalist is, the more leeway they tend to have in sharing their opinions on Twitter without repercussions.

In recent years, many newsrooms have put policies in place regarding reporters' social media activity, but they aren't always effective.

The former CNN media reporter noted how VandeHei was lampooned by other journalists and so-called media reporters. In the end, the masks will always slip when it comes to their liberal bias.

For those who can stomach live stand-up reports or read a newspaper reporter’s copy, they emit plenty of bias on their own, so Twitter has only helped the American public in amplifying what’s undoubtedly one of if not the most self-centered industry in America.