While recapping Monday’s presidential debate and trying to fact-check Donald Trump, MSNBC host Rachel Maddow seemed not to have all her ducks in a row on Tuesday when it came to slamming Trump for supposedly lying about Bill Clinton signing the North American Free Trade Agreement (NAFTA) when she argued it was actually George H.W. Bush.

Turns out, Maddow’s attempt to run off as many falsehoods from Trump as possible hindered a thorough explanation that while then-President Bush negotiated NAFTA and held a initial signing of the agreement, it was Clinton who made the final changes and ushered its passage through Congress to its signing on December 8, 1993 and implementation on January 1, 1994.

This means that, essentially, NAFTA wouldn’t have been able to carry on without the ratification of Congress because, of course, treaties require final approval from the legislative branch as per Article II, Section 2, Clause 2 of the U.S. Constitution.

Nonetheless, Maddow felt it pertinent to include Trump’s claim from the debate that Hillary’s husband signed the agreement and swat it down alongside statements the Republican candidate made that were actually false (ex. denying he’s argued that climate change is fake being pushed by the Chinese when he’s tweeted about it).

“He did say a lot of untrue things. Bill Clinton did not sign NAFTA. George Bush signed NAFTA,” Maddow ruled in the first of several on-screen bullet points.

As stated above, the MSNBC host’s dismissal of this as blatantly false isn’t exactly true eithet. Our friends at The Daily Caller astutely pointed out that Bush kick-started the negotiations in 1990 and his term ran out (thanks to Clinton defeating him in the 1992 election) before Congress could put their stamp of approval on it.

A Houston Chronicle article at the time from December 18, 1992 cited then-Clinton official and future chief ABC News anchor George Stephanopoulos in explaining how Clinton would alter the deal to its final version:

Clinton spokesman George Stephanopoulos said the new administration would seek ""to address as many of the (outstanding) issues as we can in implementing legislation. Unresolved concerns can be worked on in supplemental agreements'' with Mexico and Canada, Stephanopoulos said.

The relevant portion of the transcript from MSNBC’s The Rachel Maddow Show on September 27 can be found below. 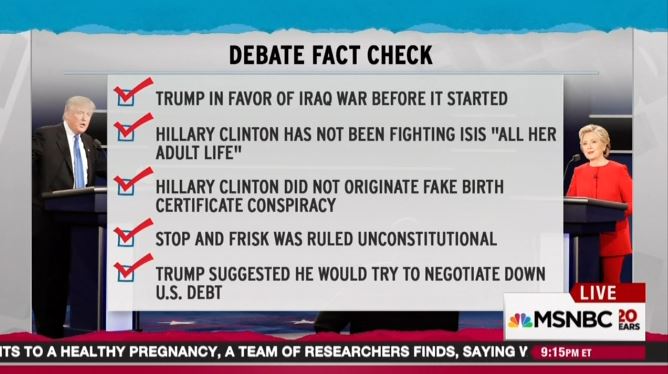 RACHEL MADDOW: This was a strange, strange, strange debate. Everybody thought that the challenge for Hillary Clinton and for the moderator, Lester Holt, and for the media covering it was going to be raw fact checking, right, the number of untrue things that Donald Trump has said on the campaign trail that he`s not used to getting called on live and in real-time. He did say a lot of untrue things. Bill Clinton did not sign NAFTA. George Bush signed NAFTA. Donald Trump did, in fact, say that climate change is a hoax perpetrated by the Chinese. Donald Trump did not drop his allegation that President Obama is secretly foreign after the president published his long form birth certificate in 2011. He kept up with it for five years. The murder rate in New York City is not going up. It hasn’t gone down. Donald Trump was in favor of the Iraq war before the Iraq war started. Hillary Clinton has not been fighting ISIS all her adult life not unless ISIS is something other than ISIS. Hillary Clinton was not the originator or the proponent of the idea that President Obama’s birth certificate was fake. Stop and frisk was ruled unconstitutional. Trump did, in fact, once suggest that he would try to negotiate down the national debt of the United States. The fact checking certainly could be done. I mean, most people can do it off the top of their heads. But the fact-checking didn’t end up being the hard part of how to process this or understand what just happened and what was unusual about last night.