WashPost Inquires With Hillary If She Cried Tuesday Night, What She’ll Tell Her Granddaughter 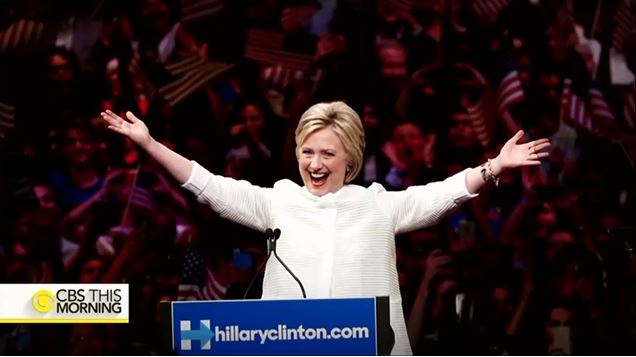 For the first time since Hillary Clinton began her official presidential campaign in April 2015, The Washington Post was granted an interview with her and, needless to say, Clinton campaign correspondent Anne Gearan spent the first portion inquiring whether or not Clinton cried on Tuesday night and what she’ll tell granddaughter Charlotte years from now.

Gearan’s interview lasted just 10 minutes, so she only had so much time to touch on as many subjects as possible, but it quickly evaporated when she started with this question that may or may not end up in a future edition of Notable Quotables:

You sounded reflective, I mean, maybe almost quiet at the start of your remarks last night. It must have been pretty emotional. What will you remember most and if you’ve thought about it, what do you think you’ll tell [granddaughter] Charlotte about last night when she’s old enough to hear about it from you?

In a clear sign that Clinton appreciated such a gift for a first question (since all we have is a transcript to go off of), the presumptive Democratic presidential nominee told Gearan it was “a great question because I was overwhelmed” by the evening that included a rally plus one of the softest network interviews she’ll ever have with ABC’s David Muir (which we chronicled here and here).

Relaying her experience of Muir shepherding her to window above the crowd to have a sneak peek, she took up a slew of time describing the “incredible enthusiasm, and the energy, and the moment” before turning to how she was afraid she would break down during her victory speech:

And it just was a sense of momentous historic experience that I was part of it, and it really was hard to actually, you know, make sense of it. And I was worried, I was worried that if, when I went out to speak, just the emotion of the moment would be so intense that I might have trouble getting through the speech itself.

So I did have to collect myself and try to get prepared. But going out there and actually being in the midst of it, not just looking down on it like I had a few minutes before, just was an incredible moment for me, and I hope one that many other people could take a lot of joy and pride in.

Of course, Gearan seized on that point and wondered aloud to Clinton if she “actually did end up choking up” even though, in Gearan’s mind, she “appeared to get through it without delay.” Only after Clinton’s answer did Gearan shift to substance but not without asking the former First Lady’s permission:

With your permission we’ll pivot to, back to hard politics. What do you think it will take to fully include Bernie Sanders in your candidacy and your campaign? Is it important in your view to make him and his supporters feel like they’ve won even as he’s lost?

The remaining questions came from the same strain of fawning praise that Muir’s were as opposed to CNN’s Anderson Cooper or FNC’s Bret Baier, ranging from concerns that Bernie Sanders “be less than a full partner in that effort as you were with President Obama in 2008” to possible changes to the party’s superdelegates rules to how both she and Donald Trump have such high unfavorable ratings.

Before closing by asking if “Trump is a racist” and if she’s been contacted by the FBI about her e-mail investigation, Gearan provided the lone question that had bite: “You spoke last week and again since then about rejecting the politics of fear in this election. But in a way, are you not running a campaign of fear yourself — just the fear of Donald Trump?”