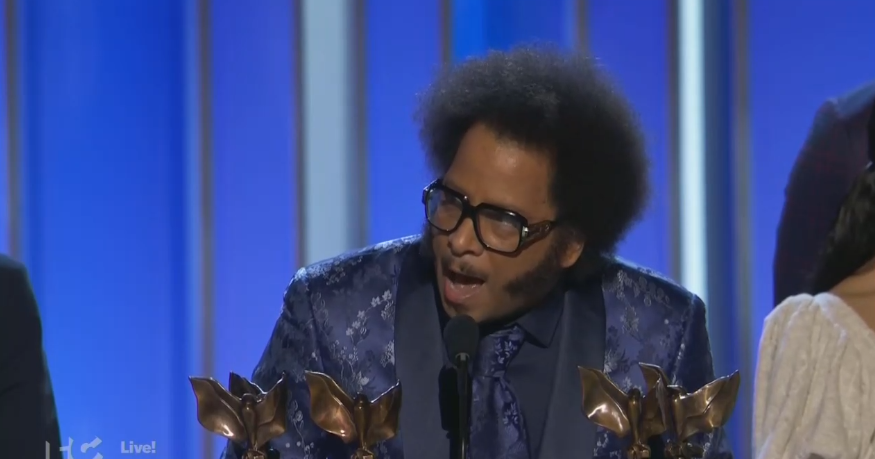 Sorry to Bother You caused quite a stir last summer.

Not only did Boots Riley’s film overperform at the box office, it earned raves from film critics nationwide. The movie just snared a Best First Feature award from the Independent Spirit Awards.

Now, Riley is waging a one-man war on behalf of Venezuelan strongman Nicolas Maduro. Don’t believe the stories of Venezuelans starving, he says via Twitter. It’s much worse in Oakland, Calif.

“There are no words. No way to describe a person who make so many mistakes,” one man said of Maduro, “I can’t express how much of a dictator he is – so cynical, so sadistic and not only him, but all his companions.”

An ABC News report says, “Venezuela’s economy has halved in size over the last five years.”

Venezuelans’ diets have become ever more deficient in vitamins and protein, as currency controls restrict food imports and salaries fail to keep pace with inflation, which is now above 2 million percent annually.

Forces loyal to Maduro are blocking desperately needed aid, sometimes by force, to the impoverished country. Nonsense, says Riley. He pins the blame on phony media reports and an alleged U.S. coup to seize the country’s oil resources. 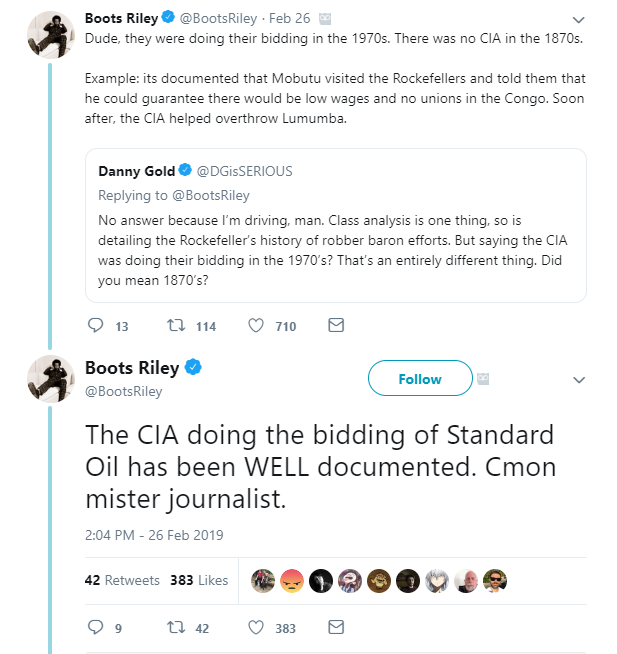 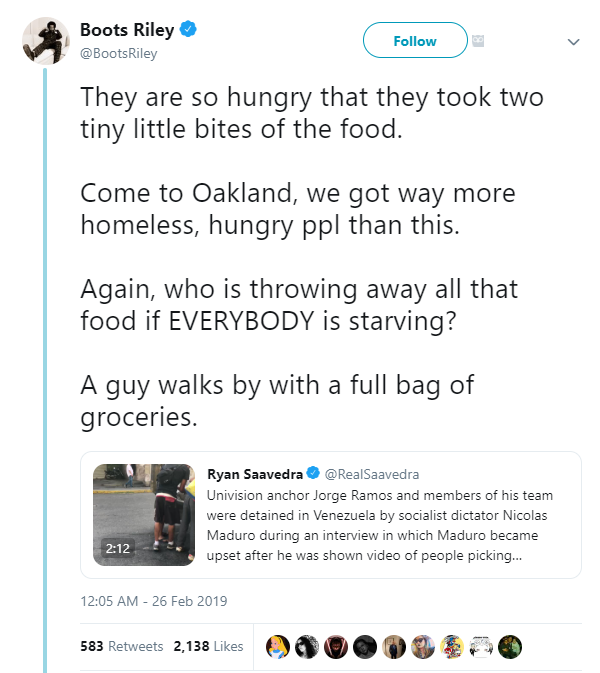 He also downplayed members of the press being detained by the country’s police. That, despite this report describing the incident.

“Very shortly into the interview, Maduro didn’t like the line of questioning, and they stopped the interview,” Univision spokesman Jose Zamora said. 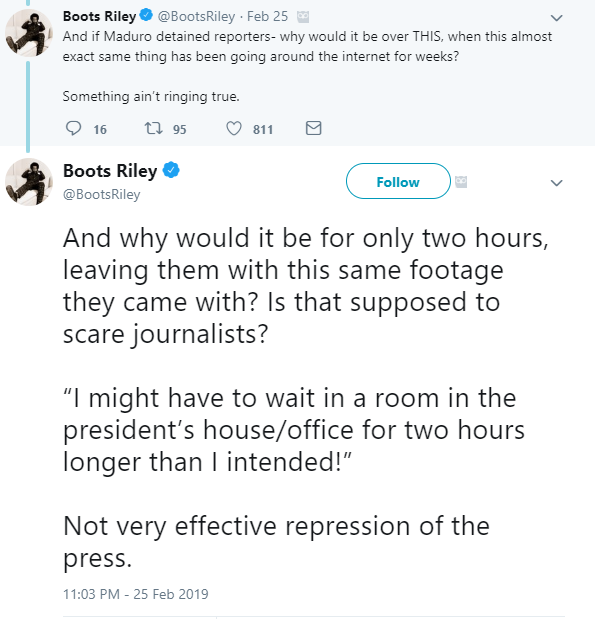 ... as well as footage a Univision journalist capturead and shared online. 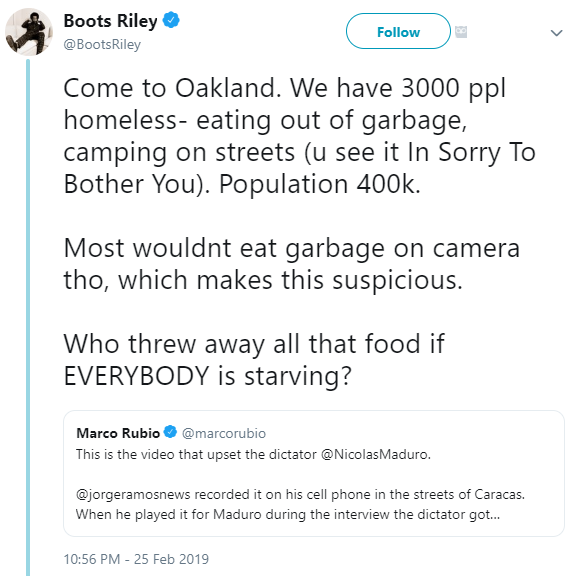 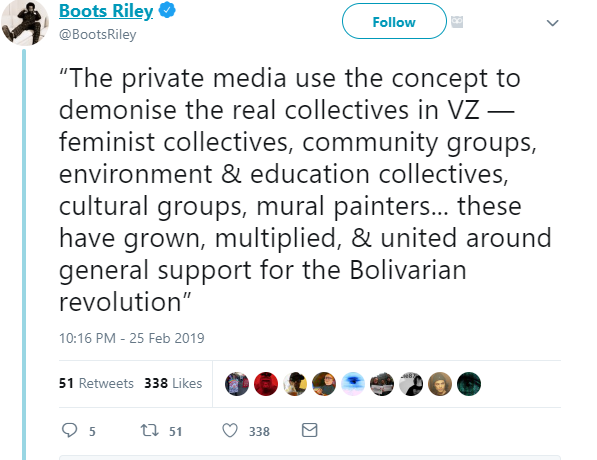 This shouldn’t be surprising for anyone who heard Riley’s acceptance speech at the Independent Spirit Awards Saturday.

Riley then switched things up to call out the United States and the CIA, who he theorized is organizing a coup in Venezuela right now. “I also want to say that the CIA is trying to have a coup in Venezuela. We should all be putting our voices out to stop the U.S. from having regime change for oil in Venezuela.”

Did Riley offer any proof to back up his claims? Of course not. Have any journalists followed up with said claims? Highly unlikely.

Riley did, however, feel guilty for not thanking the people who helped him craft Sorry to Bother You. So, instead of spreading the love at the awards gala he boiled it down to a Tweet. 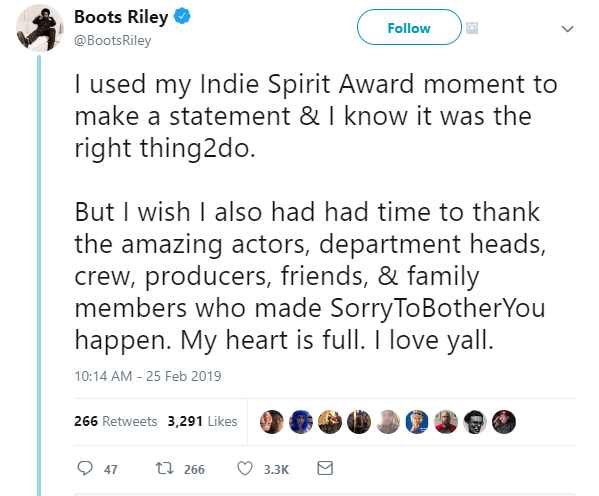