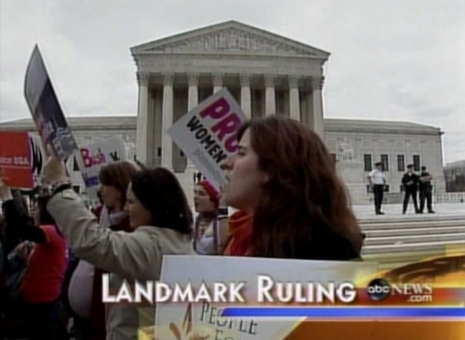 The ABC, CBS and NBC evening newscasts on Tuesday night all ran full stories on the Supreme Court's 5-4 ruling upholding the Partial Birth Abortion Act, but while each included arguments from justices in the majority, featured a soundbite from pro-life lawyer Jay Sekulow and offered at least a brief description of the procedure, they all framed the stories in ways favorable to those on the losing side.

All led into competing soundbites by putting abortion supporters on the side of “rights” -- describing “abortion rights supporters” versus “abortion opponents” -- characterized the ruling as imposing a further “restriction” on abortion instead of as expanding protection for the unborn, and creatively distanced themselves from the “partial-birth” abortion term.

The ABC and CBS stories were the least balanced since, after giving about equal time to quotes from justices on both sides and advocates on each side, the two networks added another pro-partial-birth abortion perspective. ABC's Greenburg featured the view of an “abortion provider” and CBS's Andrews showcased a woman, whose baby would have suffered and died after birth, who had a partial-birth abortion and, in tears, declared: “It's wrong for this law to exist at all. Nobody could agonize over the decision more than my husband and I did.”

Transcripts of the three April 18 stories for which I made partial transcripts that Brad Wilmouth completed: .

"Abortion ban: The Supreme Court upholds a ban on the procedure known as 'partial-birth abortion,' its most sweeping decision since Roe v. Wade." 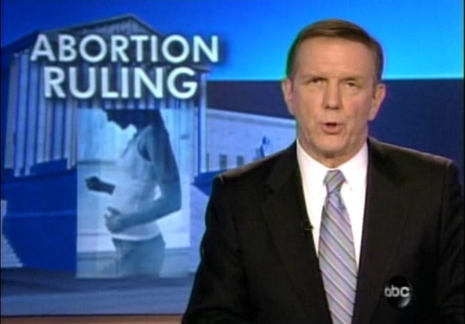 "Now to the Supreme Court and a very important decision on abortion. In a 5-4 landmark decision, the court's new conservative majority today upheld a nationwide ban on a controversial procedure, one that critics call 'partial-birth abortion.' It was a long-sought victory for abortion opponents. And it sets the stage for even more legal battles to come. ABC's Jan Crawford Greenburg joins us from the court tonight. Jan?"

Jan Crawford Greenburg: "Charlie, today's decision represents a seismic shift. For the first time since Roe versus Wade, the court said the government could ban a specific type of abortion procedure. And for the first time, it upheld an abortion law that did not contain an exception for a woman's health. Scores of women gathered at the Supreme Court to protest. Abortion rights activists were devastated."

Nancy Northrup, Center for Reproductive Rights: "The Supreme Court basically guts 30 years of protection for women's health in the regulation of abortion."

Greenburg: "At issue, a bipartisan federal law that banned one type of abortion performed in the second trimester. The law is called the 'Partial-Birth Abortion Act' because the fetus is partially delivered from the womb before it is killed. Writing for the majority, Justice Anthony Kennedy said Congress found the procedure 'gruesome' and 'never medically necessary.' Kennedy said the government has the right to pass laws that 'show its profound respect for the life within the woman.' In court today, an angry Justice Ruth Bader Ginsburg took the unusual step of reading parts of her dissent aloud. She said the decision was 'alarming' and could jeopardize women's health. She said it 'cannot be understood as anything other than an effort to chip away' at the right to an abortion. Conservatives agreed. They said the decision is a significant change that will lead to more restrictions on abortion."

Jay Sekulow, American Center for Law and Justice: "Doctors don't get to do everything they want to do all the time, especially when there's a life involved in it, and here I think the court said, 'You know what? I think when it comes to infanticide, when it comes to this procedure, we're saying no.'"

Greenburg: "But abortion doctors like LeRoy Carhart say some women need the procedure."

Greenburg to Carhart: "Why?"

Carhart: "Because we won't be able to do what I feel is the safest."

Greenburg: "Today's decision also shows the differences that elections and Supreme Court nominations can make. Just seven years ago, the Supreme Court struck down a similar state law when Sandra Day O'Connor was on the court. Neither John Roberts or Sam Alito had yet to be nominated."

"A major ruling from the Supreme Court on abortion. The court upholds the federal ban on a controversial late-term abortion procedure."

"Now to another big story tonight, a Supreme Court ruling on abortion. The justices, sharply divided, today upheld the new federal ban on a controversial late-term abortion procedure, a procedure opponents and the law itself refer to as 'partial-birth abortion.' In the 5-4 decision, Chief Justice Roberts and Associate Justices Scalia, Thomas, Alito and Kennedy all voted to uphold the ban. In the majority opinion, Justice Kennedy wrote that opponents of the ban 'have not demonstrated that the act imposes an undue burden on a woman's right to abortion.' We'll begin our coverage of this ruling with Wyatt Andrews."

Wyatt Andrews: "It's the first federal ban on any kind of abortion since the court established the right to an abortion in Roe vs. Wade. For abortion opponents, it's the biggest legal victory in 34 years."

Jay Sekulow, American Center for Law and Justice: "The court said the states have a legitimate interest in protecting the unborn child's life."

Andrews, over "Partial-Birth Abortion Ruling" on-screen: "The ban on what Congress called 'partial-birth abortions' applies to any abortion where a fetus is delivered mostly intact. The law, in part, says 'past the navel' when the doctor then kills the 'partially delivered living fetus.' In a 5-4 decision, Justice Anthony Kennedy said Congress was justified in finding this 'similar to the killing of a newborn infant.'"

Senator Orrin Hatch (R-UT): "An overwhelming case was made that this procedure was not necessary and it was a barbaric procedure."

Andrews: "The ruling is huge because the ban is now the first abortion restriction ever approved with no exception for the health of the mother."

Clip of protesters: "Not the church, not the state, women must decide their fate!"

Andrews: "Abortion rights supporters bitterly protested even though the number of the banned abortions is small and mostly confined to the third trimester. The protesters say this law can now apply to thousands of second-trimester abortions even when the woman's doctor thinks partial delivery is the safest course."

Eve Gartner, Planned Parenthood Federation of America: "So now, politicians, not doctors, are making medical decisions that are going to put women at risk of hemorrhage, loss of future fertility, and other very serious medical harms."

Andrews: "Opponents of the ban also argue the law could apply to women like Mary Vargas, whose late-term fetus suffered kidney failure in the womb."

Mary Vargas: "Our son had no chance at life."

Andrews: "Her choice, she says, was between birth, where the child would suffer and die, or the kind of mostly intact abortion that's now illegal."

Vargas: "It's wrong for this law to exist at all. Nobody could agonize over the decision more than my husband and I did."


Andrews: "In a stinging dissent, Justice Ruth Bader Ginsburg called the ruling 'alarming' and 'irrational' and blasted the all-male majority for not respecting women's choices. 'This way of thinking,' she wrote, 'reflects ancient notions of women's place in the family.' This is one of those rulings that will have a long-term impact. The very definition of a safe and legal abortion has just changed with abortion opponents saying it's about time. Wyatt Andrews, CBS News, at the Supreme Court."

"But first to Washington and the U.S. Supreme Court where the justices today issued what may be the most important abortion ruling since Roe versus Wade decades ago. Chip Reid is at the court for us tonight. Chip, good evening."

Eve Gartner, Planned Parenthood: "Today's ruling is a seismic shift in the way that the court has handled protections for a woman's health."

Reid: "The court, in a 5-4 decision, upheld a federal law banning a late-term abortion procedure that opponents call 'partial-birth abortion.' Justice Anthony Kennedy wrote for the majority that the law does not impose an undue burden on a woman's right to abortion. Abortion opponents call it a major victory, stopping abortions that partially deliver a fetus, then collapse its skull."

Jay Sekulow, pro-life attorney: "I think it's going to be a huge momentum shift for the pro-life movement. The opinion is very, very significant."

Reid: "Nearly 90 percent of abortions occur in the first 12 weeks of pregnancy and are not affected by the ruling, but writing for the court's four dissenting justices, Ruth Bader Ginsburg called the decision 'alarming,' arguing that for the first time since the court established a right to abortion, in 1973 in Roe v. Wade, it has approved an abortion restriction without making an exception for a woman's health. Abortion rights activists worry this may be only the start of a campaign to limit abortion rights."

Eleanor Smeal, pro-choice activist: "This decision is an invitation to legislators both at the national and state level to further restrict abortion, and the Supreme Court will let it happen."

Reid: "Supreme Court experts say one key to today's decision is the replacement of moderate Justice Sandra Day O'Connor with conservative Samuel Alito. This decision, they say, could be a sign the court is heading in a new direction on abortion."

Tom Goldstein, Supreme Court attorney: "Today the Supreme Court opened the door to a possible overruling of Roe v. Wade. They didn't give any strong indications whether they would walk through the door."

Reid: "Now, doctors who violate the ban could get as much as two years in jail, but there is no penalty for women who undergo the banned procedure."