Brian Williams was off this week, but he left a taped piece with his bias for Friday's NBC Nightly News. To mark the 60th anniversary of the Enola Gay dropping an atomic bomb on Hiroshima on August 6, 1945, Williams went to the Smithsonian's Air and Space Museum annex near Dulles Airport -- where the plane is on display -- to talk to the plane's navigator, Dutch Van Kirk. Williams asked: “Do you have remorse for what happened? How do you deal with that in your mind?” Van Kirk indignantly replied: “No, I do not have remorse...”

A transcript of the second half of the August 5 NBC Nightly News story, picking up after Van Kirk offered some recollections of what he saw: 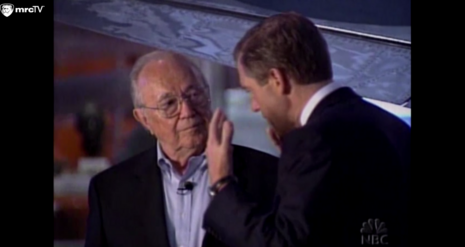 OVER VIDEO OF THE DEVASTATION AND INJURED CHILDREN, WILIAMS INTONED: “70,000 people in the city of Hiroshima were killed instantly. The lingering radiation killed 70,000 more over the next five years. But Dutch and his fellow crew members will have none of the controversy surrounding the bomb. They point out that the firebombing of Japanese cities earlier in the war killed four times as many people. It's widely believed the U.S. would have invaded Japan, and that the Japanese would have fought to the very end.”

WILLIAMS TO VAN KIRK AS THE TWO STOOD NEXT TO THE ENOLA GAY: “You just told me the story about one photograph from the war that always kind of catches you, the Japanese soldier returning to his city that's been destroyed. Do you have remorse for what happened? How do you deal with that in your mind?

VAN KIRK REPLIED EMPHATICALLY: “No, I do not have remorse. I pity the people who were there. I always think of it, Brian, as being, the dropping of the atom bomb was an act of war to end a war.”

That ended the NBC story. MSNBC.com's posted version of this story, with MSN video.

(Van Kirk is one of three surviving crew members and the only one well enough to travel for the anniversary.)