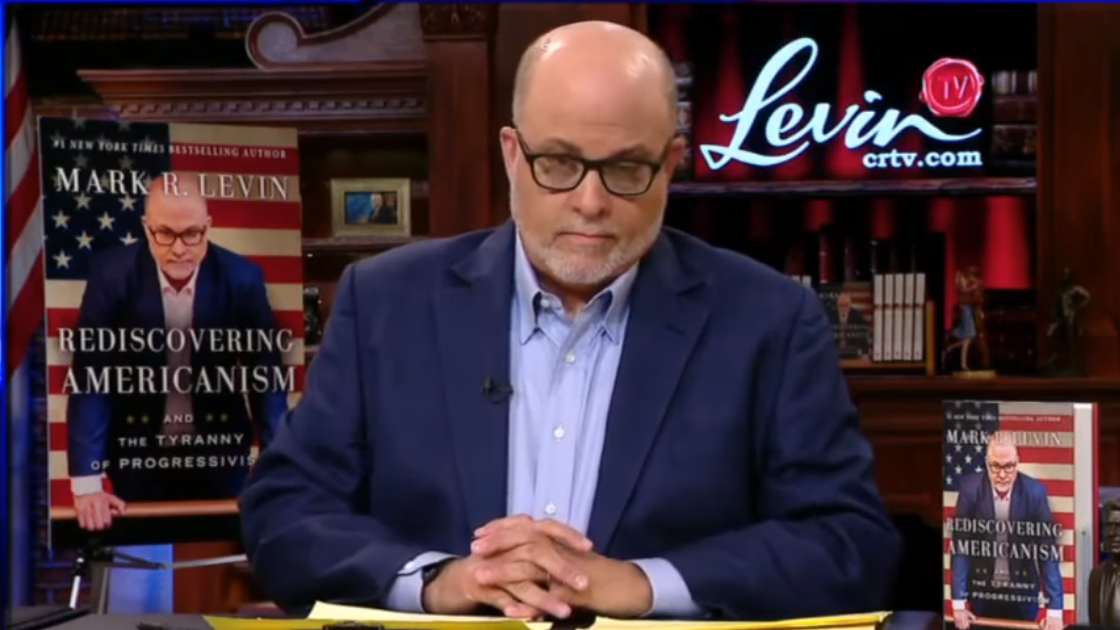 On The Mark Levin Show Tuesday, Levin began the show with these criticisms:

I would ask the people at the Washington Compost, do you ever do any story that is actually supportive of Donald Trump? Have you ever done any story supportive of Donald Trump? I would ask the New York Slimes the same thing and the Constipated News Network, CNN, the same thing. Is all news anti-Trump? Now it's one thing to have a disagreement with the president on the editorial pages, I get it. That I get...

It is important to note that we are not complaining that the media is covering these Russia stories. Rather it is how they cover them, how much they cover them, and what they choose to ignore that is so egregious.

Now, we get into the appearance of this and the implication of that, and the insinuation of this. Who needs that when we have real scandals involving Debbie Wasserman Schultz and Fusion GPS and domestic surveillance undertaken by the Obama administration? Those are real scandals that the media essentially ignores...The same Washington Compost that ignores the Obama scandals one after another, covers for Obama when it comes to the abuse of the IRS or Fast and Furious or ignoring the Constitution's limits on the presidency. Of no consequence whatsoever. The great crime of open borders, nah they don't care about that.

As explained here, the recent Debbie Wasserman Schultz and Fusion GPS stories are very important, yet are being completely covered up by the media.

Newsbusters has documented this cover-up. Here are just a few examples:

Levin points out the absurdity that this meeting is getting so much coverage considering Hillary's dealings with the Russians.

Now, ladies and gentlemen, we have this Fusion GPS report, and the nub of that report is the Kremlin put it together. For Fusion GPS, which many of us think is a Democrat front group. Which was also used by Mr. Comey and the FBI to some degree and we can't seem to get to the bottom of this. We have actual, actual collusion and conspiracy with an organization that got information a dossier that involves the Kremlin and Putin that was intended to damage Donald Trump and his election efforts, and she's [White House Press Secretary Sarah Huckabee Sanders] not asked one damn question about that, not one...And by the way, a group that took money from the Russian government, maybe the Democrats, and Mr. Comey was thinking of giving them money too. This Fusion GPS thing is your quintessential KGB ruse...

SANDERS: And if you want to talk further about a relationship with Russia, look no further than the Clintons as we have said time and time again. [BEING INTERRUPTED BY MEDIA] Bill Clinton was paid half-

SANDERS: --Million dollars to give a speech to a Russian bank and was personally thanked by Putin for it. Hillary Clinton allowed one-fifth of America's uranium reserve to be sold to a Russian firm whose investors were Clinton Foundation donors and the Clinton campaign chairman's brother lobbied against sanctions on Russia's largest bank.

LEVIN: And here's she's educating these clowns. Educating these bufoons in the media, who will not be educated. Because they're ideological.

Levin then mocked the media for their irrational hysteria:

And you know, I'm just waiting some time in the show, as you know we're the cleanup hitter over here, given we are on six to nine eastern. So all the eastern media, you know, all of them go home by seven o'clock. We're always waiting for one of these, just waiting for the next, "Oh my God, did you hear this?" "What!?" "Ivanka was going to hold a meeting with a Russian but she didn't." "Oh my God!" Go ahead.

What makes the hysteria even more ridiculous besides the hypocrisy (The Clintons actually colluded with the Chinese in the '96 election and Ted Kennedy did so with the Russians in '84), is that Trump's policies are far harsher on the Russians than that of any Democrat.

SANDERS: If you guys want to talk about having relations, which you guys seem obsessed with doing, look no further than there. If you want to talk about someone who's actually been tough on Russia, look at President Trump. He wants more fracking, more coal, more energy, a stronger military, a stronger defense. Those things aren't good for Russia. I think the distinctions are very clear and you guys want to create a narrative that just doesn't exist.

Putin doesn't like what we are doing with our energy in this country. He'd much prefer a Hillary or Obama and Bernie Sanders and all the hate America first crowd...We're not slashing it [miltary] like we were in the previous regime... You have to be Hellen Keller when it comes to Fusion GPS and domestic surveillance by Obama and all the rest of it...

The show can be found in its entirety here.