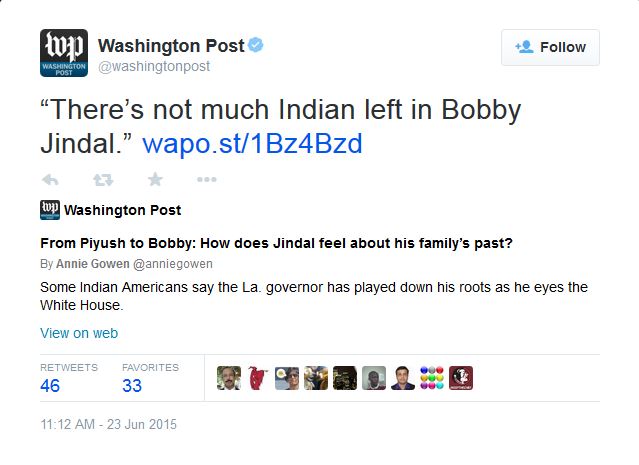 On Tuesday, the Washington Post promoted an article touting how "many" supposedly view Bobby Jindal as "a man who has spent a lifetime distancing himself from his Indian roots" by tweeting a professor's eyebrow-raising claim about the Louisiana governor: "There's not much Indian left in Bobby Jindal."

The article from correspondents Annie Gowen and Tyler Bridges, "From Piyush to Bobby: How does Jindal feel about his family's past?," also included the quote from Pearson Cross, a "professor at the University of Louisiana at Lafayette who is writing a book on the governor." Gowen and Bridges led by noting that "when Bobby Jindal was elected the first Indian American governor in U.S. history, residents of his father's village [in India]...set off firecrackers, passed out sweets and danced in the streets." They continued by asserting that "the conservative Republican will probably tell the story of his family's immigrant journey to the United States, where his engineer father and his mother, a state employee, worked hard to give him a typical American childhood."

Gowen and Bridges then noted that "Jindal's status as a conservative of color helped propel his meteoric rise in the Republican Party," and followed with their "spent a lifetime distancing himself from his Indian roots" line. They included some supporting anecdotes from the Republican's early life before continuing with Cross's remark:

As a child, he announced he wanted to go by the name "Bobby," after a character in the "Brady Bunch." He converted from Hinduism to Christianity as a teen, and was later baptized a Catholic as a student at Brown University — making his devotion to Christianity a centerpiece of his public life. He and his wife were quick to say in a "60 Minutes" interview in 2009 that they do not observe many Indian traditions — although they had two wedding ceremonies, one Hindu and one Catholic. He said recently he wants to be known simply as an American, not an Indian American.

"There's not much Indian left in Bobby Jindal," said Pearson Cross, a political science professor at the University of Louisiana at Lafayette who is writing a book on the governor.

Of course, the underlining assumption from Cross is that Indian equals Hindu, which is an oversimplification. Christianity actually reached India not long after the Apostles left the Holy Land.

The Washington Post journalists also spent several paragraphs outlining some of Jindal's family history, and zeroed in on how Jindal's mother tried to minimize her family's differences with her neighbors:

The Jindals were part of a small community of Indian families in Baton Rouge at the time, many who had come to Louisiana for university jobs. There was no temple then, and Bobby Jindal remembered that they gathered at someone’s home most Sundays for Hindu religious ceremonies known as pujas, with potluck curries afterward.

Otherwise, the boys spent time reading and playing video games, or outside with neighborhood friends.

"My mom was fully committed to raising us as Americans," Jindal said. "That was a conscious decision. We ate food that would be familiar to other families in south Louisiana. She wanted to raise us like other kids in the neighborhood."

Later in the article, Gowen and Bridges played up how Governor Jindal won elections by "learning how to cultivate the 'Bubbas for Bobby,'" and that "as the years went by and Jindal's political star rose, many in the Indian American community became disillusioned with their native son:"

...Discouraged by a lack of engagement, some of Jindal's early donors have faded away, according to Sanjay Puri, chairman of the U.S. India Political Action Committee. Jindal's top-contributors list now includes such recognizable names as cosmetics mogul Georgette Mosbacher.

Suresh C. Gupta, a Potomac doctor, gave a fundraiser for Jindal's first gubernatorial bid. But he said Jindal has actively tried to disassociate himself with the Indian-American community in recent years.

When Indian Prime Minister Narendra Modi came to the United States to visit last September, a host of politicians attended his rally at Madison Square Garden. Jindal did not. When Jindal's name was mentioned, he was booed by the crowd.

It should be pointed out that the two correspondents didn't include any quotes from Indian-American supporters of the Republican politician.