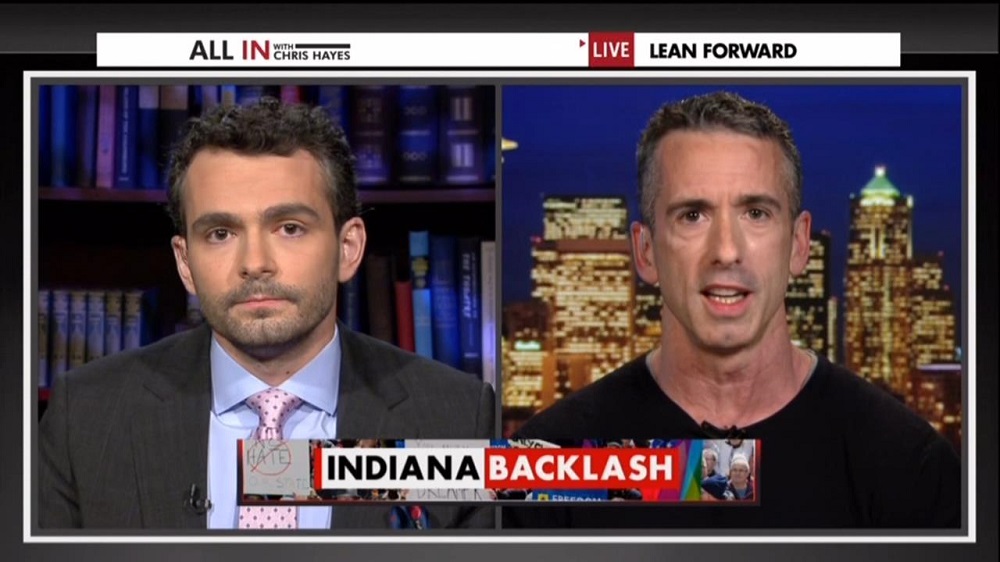 The Heritage Foundation's Ryan Anderson defended Indiana's religious freedom law on Monday's All In program on MSNBC, and blasted far-left LGBT activist Dan Savage for likening the new statute to Jim Crow: "It's interesting that Dan says that it's discrimination. It strikes me that all of the businesses that are currently boycotting Indiana are saying that they want to run their businesses in accordance with their values....Why is it the 70-year-old grandmother can't be free to run her business, in accordance with her values?" [video below]

Fill-in host Ari Melber moderated a panel discussion with Anderson, Savage, and former RNC Chairman Michael Steele on the controversy over the Indiana law. Midway through the segment, Melber asked Anderson, "Do you see this law as allowing people who, for religious reasons, don't want to serve gays to have that protection?" The pundit replied, in part, that "no one's interested in just refusing to serve gays or lesbians. The only religious liberty concerns center around marriages and wedding ceremonies."

Savage retorted with the social left's oft-used talking points on LGBT issues. However, Anderson didn't sit idly by when the activist dropped his Jim Crow reference:

DAN SAVAGE, HOST, "SAVAGE LOVECAST": I think Ryan is mistaken. The religious freedom act that Chuck Schumer supported, that Bill Clinton signed into law; prevented the government from discriminating against people on the basis of their religious beliefs. This law is so broadly worded that although the intent is to target gays, lesbians, bisexual, and trans-gendered people for discrimination – which is why a similar law in Georgia was tabled when an amendment was attached banning discrimination. It's why this law was drafted, and it will legalize discrimination not just against LGBT people, but all against all potentially.

And this is, really, settled civil rights law – that if you open the doors of a private business, and you're open the public, you have to be open to all of the public. Publicly-financed roads – roads that everyone pays for – bring customers to your business. The police department and the fire departments that all the public paid for protect your business – make it possible for you to keep your business open. And then, you're not allowed to decide at the front door that you can discriminate against large, broad swaths – groups of the public.

You know, anti-black bigots – racist bigots, during Jim Crow and segregation, made the exact same arguments that you're hearing people make now – it's my private business. I should be able to decide who I serve and who I don't serve-

RYAN ANDERSON, THE HERITAGE FOUNDATION: Not at all; not at all – that's really unfair to be saying that-

SAVAGE: There's an infamous interview on the radio of a restaurant owner using the same rhetoric that segregationists used during the civil rights movement. These are the kinds of people – these kinds of bigots – that these laws have empowered-

ANDERSON: That's really unfair to be labeling half of the country-

Melber interrupted Anderson before he could complete his rebuke of Savage, and turned to Steele. The moderate Republican actually sided with the LGBT activist on the issue:

MICHAEL STEELE, FMR. RNC CHAIRMAN: Well, you know – you know, this is one of these moments where you sit there and you just go, why? I mean, Dan is absolutely right. A lot of this is settled law in many respects. Even with respect to the religious freedom act, the idea was related to government. Now, the – I think [Indiana] Governor [Mike] Pence is even acknowledging this law is so broad that it has clearly been misinterpreted from – from its intent. And the question is, what is its intent? If the intent is to mirror what the federal law is, then fine – then draft the law that way. And then, you make it very clear by adding to your state constitution – or otherwise – language that protects every citizen in that state from discrimination. When you can't answer that question fundamentally, that's when you get on this slippery slope and have a real problem with the broader public.

Anderson and Savage then sparred for much of the rest of the segment, with one interjection from Melber. The far-left guest ended up directing his segregation barb at conservative pundit and his employer, The Heritage Foundation:

ANDERSON: Sure. I mean, that's exactly what this law does. This law protects every citizen in the State of Indiana from government discrimination. It says that the government cannot coerce anyone's free exercise of religion unless the government proves that it's doing so for a compelling government reason in the least restrictive way possible-

ANDERSON: It is the same, exact legal standard as the federal government-

ANDERSON: It's is the same standard as 31 other states-

ANDERSON: It's interesting that Dan says that it's – it's discrimination. It strikes me that all of the businesses that are currently boycotting Indiana are saying that they want to run their businesses in accordance with their values. And so, they're free to boycott Indiana. Why is it the 70-year-old grandmother can't be free to run her business, in accordance with her values; or, for that matter, a Catholic Charities adoption agency; or an evangelical day school? This law protects all of those people.

MELBER: Ryan, let me – Ryan, let – all right, everyone, I know – strong views. Ryan, I'm going to ask you a question; then, Dan, I'm going to get your rebuttal. Ryan, what do you think about folks who look at this and say – okay, yes. As you say, it changes the standard to compelling government interest. But what's going to happen when Indiana runs into, say, someone running a business who says their business reflects extreme Muslim values, and women can't enter or work there unless they're in a hijab? Do you think that's a good idea?

ANDERSON: I think, in a free society, if a Muslim citizen wants to run a business in accordance with their Islamic values, that as Americans, we let Muslims be Muslims – unless it will violate someone else's rights. And so, if they're running a business-

MELBER: That's what I'm asking you. Then – then as a legal and state law matter, can they say that women have to dress in a certain way to patron the business?

ANDERSON: I'm going to say that has to be solved by the courts. The courts will have to settle whether or not there's a compelling state interest that's being pursued in the least restrictive means possible.  I'm saying this is a good test. And so, the Muslim citizen would have his day in court to say that this is what his religion requires. And then, we would have to see from the government why they think that they have to coerce his religion. I'm in favor of living and let living-

MELBER: All right. Dan, go ahead-

SAVAGE: And the law says if the Muslim who is attempting to discriminate against women can point to a sincerely held religious belief – which is a squishy, ambiguous standard – that he wins. So really, what this law does is this bizarro-

ANDERSON: It doesn't say he wins. Dan, you're wrong about this-

ANDERSON: They are serving all of the public!

SAVAGE: Ryan and the Heritage Foundation want us – to take us back 50 years to a time when people said-

ANDERSON: No – that's not true. What I'm suggesting is that you serve all of the public-

SAVAGE: You can't eat at this lunch counter, but you're not being discriminated against. I'm going to serve you at that lunch counter in the back corner.