Todd Hits Obama From Left On Amnesty Delay: What Do You Say To Person Who's Going To Be Deported? 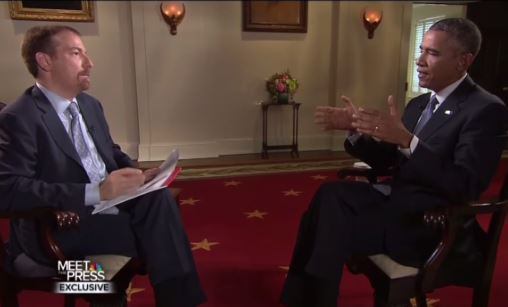 Chuck Todd recently told the Washington Post that in his role as new Meet The Press moderator, rather than spouting the conventional wisdom of the East Coast journalistic elites, "my job is to channel that frustration of the rest of America.”

So when interviewing President Obama about his intention to grant amnesty to millions of  illegal immigrants, you'd think he might have asked about the tens of thousands of criminal illegal immigrants that his administration released last year, or whether he planned to accept the invitation from the father of a man killed by an illegal immigrant to visit his son's grave.

Instead, in a question worthy of the most rarefied of the elite liberal media, Todd hit Obama from the left: "What do you tell the person that's going to get deported before the election that this decision was essentially made in your hopes of saving a Democratic Senate."  NBC didn't need to deport David Gregory to get that kind of questioning.

Note also Obama's absurd answer, which amounted to little more  than a tautology: "The country is going to be better off if we have an immigration system that works." Well, yes, everyone wants a system "that works."  The question, of course, is "works for whom?" Illegal immigrants? Democrats looking to import new voters?

CHUCK TODD: Immigration. You made a decision to delay any executive action until after the election. What do you tell the person that's going to get deported before the election that this decision was essentially made in your hopes of saving a Democratic Senate?

BARACK OBAMA: Well, that's not the reason. A couple things I want to say about immigration. Number one, I have been consistent about why this is important. The country is going to be better off if we have an immigration system that works.