Ayaan Hirsi Ali has risked her life to promote women’s rights in and outside of Islam. She was born in Somalia, where she survived female genital mutilation at the hands of her grandmother. She grew up to serve as a Member of Parliament in the Netherlands, wrote a script for a film that dared to criticize Islamic treatment of women, and when the death threats became too much for even the government secret service to handle, she was forced into hiding.

Of course, none of this mattered to Jon Stewart, who on the March 23 episode of The Daily Show chose to spend the entire interview feeling tenderly for Islam, claiming that people tend to “single out as though there is something inherently wrong with it that is not wrong with other religions.” 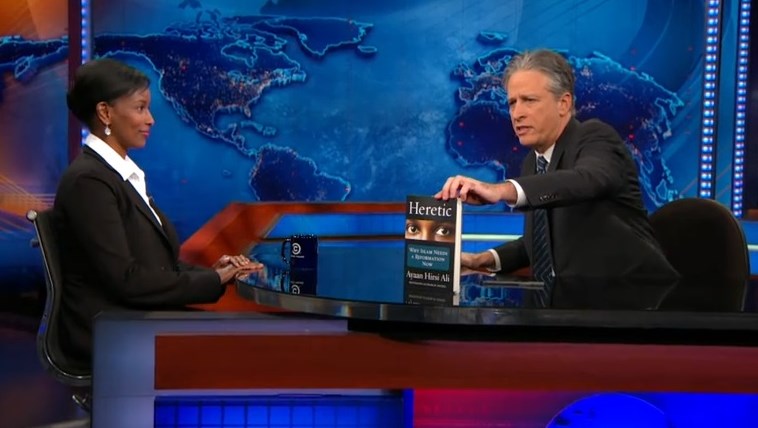 As Ali tried to make her arguments for the need for an Islamic Reformation, Stewart continuously interrupted to make his point that “Christianity went through the exact same process” and is therefore, no better than radical Islam. When Ali pointed out that “Christianity went through that process of Reformation and Enlightenment and came to a place where the mass of Christians…have accepted tolerance, the secular state--separation of Church and State, respect for women, respect for gays,” the Comedy Central host retorted that in the “Central African Republic” there are Christians who “behead Muslims and do crazy things.”

Ali concluded by stating that “Muslims need to accept the fact that this book was written by a man a long time ago and that the morality of the 7th century doesn’t apply in the 21st century.” But Stewart could not let that lie without injecting, “that hasn’t been accepted in Christianity yet.”

Bravo to Jon Stewart, for continuing to miss the point Ali, a real feminist and survivor of radical Islam, was making.

JON STEWART: My first question would be, why does Islam need a reformation now?

ALI: It is the process that we’re going through right now and it’s the process that I describe in the book that, you know, the talk of reformation in Islam has been going on for a while now and it’s interesting about now is yes there is a great deal of violence in the name Islam but there isn’t emerging an incredibly important minority of reformers who are risking their lives to try to get this change done, and I stand with them, I hope you stand with them.

STEWART: Right, oh no I mean, I guess my point is I think people single out Islam as though there is something inherently wrong with it that is not wrong with other religions and so I guess my point is, if Christianity went through the exact same process, people who thought they knew better and were purer and that created violence and uh, I get the sense you think Islam is different than other religions

ALI: Well I’m saying that Christianity went through that process of Reformation and Enlightenment and came to a place where the mass of Christians, at least in the Western world have accepted tolerance, the secular state--separation of Church and State, respect for women, respect for gays.

STEWART: In Africa there are still—in the Central African Republic Christians who—

ALI: In the name of Catholicism despise and are homophobic and--

STEWART: And also behead Muslims and do crazy things

ALI: Yeah, the Central African Republic. But the majority of Christians, unlike the majority of Muslims, are not subjected to violence. And if you look at the 70% of global violence in the world today, Muslims are responsible and the largest numbers of victims are--

STEWART: Are SUFFERING from it. But I guess my point is, it seems like the narrative is, from some reformers, that there is something inherently wrong with this religion that is not wrong with other religions and that’s the thing I’m trying to get at.

ALI: Here’s the key point. There were Christians, I mean, within Christianity, who came out and said hey, we need to change things, we need to reform. There are now Muslims today in growing numbers, not as many as large as I’d like to see, but in growing numbers, who are not pointing the finger towards Jews, or Christians, or American foreign policy or some other external factor but are saying there is something wrong with in our religion. And what I’m trying to do here, as someone who grew up in the religion and came out of it, and very much, you know, driven by a desire to change or to bring about change, or to bring about change in the conversation is okay, let’s identify them, what is wrong, what is it with Islam that we need to change and then I have these five key points.

ALI: I happen to think that the Koran is actually written by a man, by men, and it’s time for that narrative to change so, I totally agree with you…

STEWART: But you get, you get what I’m saying, to say that we’re just going to change the text, don’t we have to somewhat change…

ALI: No what I am arguing here is not to change the text but for Muslims to accept the fact that this book was written by a man a long time ago and that the morality of the 7th century—

STEWART: But that hasn’t been accepted in Christianity yet—

ALI: And the morality of the 7th century doesn’t apply in the 21st century and they have to pick that up.

ALI: And I think, I honestly think most Christians have. Have accepted that--

STEWART: That the Bible was written by man.

ALI: That the morality of God knows when doesn’t apply now.