The liberal thought police have struck again. On Friday, November 21, one day after Obama announced amnesty for five million illegal immigrants, the Indianapolis Star posted a cartoon by Gary Varvel that depicted an American family gathering around the table for Thanksgiving. As the nonplussed father presents the turkey, three people appear to be climbing in the window, and he states, “Thanks to the president’s immigration order, we’ll be having extra guests this Thanksgiving,”

It did not take long for the virulent cry of racism to be heard by Indystar.com. Within one day, executive editor Jeff Taylor published an article admitting the newspaper’s error in featuring the cartoon and removed it from the website altogether. 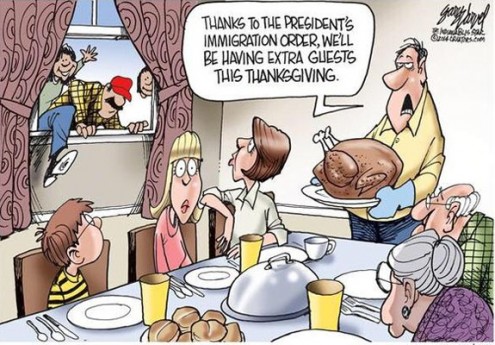 Most amusingly, Indystar originally tried to appease protestors by removing the moustache from the face of the man climbing into the window, in order to make the cartoon less “racist” and the man seem less stereotypically Mexican.

No matter that, as Taylor admits, “Cartoons are seldom intended to be read literally” and Varvel was simply expressing “the view of many conservatives and others that the president's order will encourage more people to pour into the country illegally.” The cartoon offended the Left and therefore had to be taken down.

While Taylor ends his letter by stating that it is “important to encourage a vigorous public debate on issues of this magnitude…with respectful discourse,” the actions of his newspaper have made it clear that no conservative opinion can be viewed as a form of legitimate “discourse.”