WaPo's Eugene Robinson: GOP Has 'No Mandate' and 'No Vision for Governing'

Eugene Robinson is best known to MSNBC viewers for his reoccurring appearances as a guest panelist on Morning Joe who represents the ever-informative opinion of the liberal print media. On October 22, Jack Coleman reported here how The Washington Post columnist appeared on The Rachel Maddow Show to emphasize just how hard it was for Ben Bradlee to lead the charge to bring down Nixon’s presidency.

Robinson’s other noteworthy moments range from blaming the length of the brief Obama was supposed to read regarding the impending threat of ISIS for his inability to take action and hyperbolizing a federal judge’s ruling striking down DC’s ban on the public carry of firearms as meaning that the courts were “essentially saying no, go ahead, shoot it out." 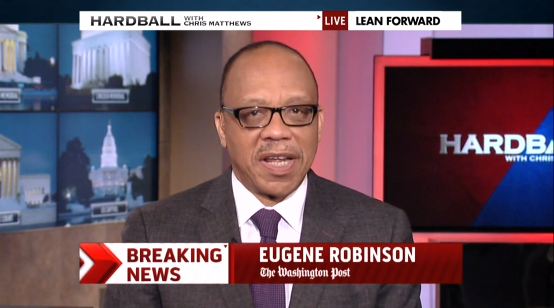 In his Washington Post column on Thursday, Robinson made it quite clear that he should receive a televised “liberal” label every time he appears as a nonpartisan commentator. In his op-ed entitled “Do Republicans have a plan for the country? The answer is ‘no,’” Robinson explained how “no matter how well Republicans do at the polls Tuesday — and my hunch is they won’t do as well as they hope — the GOP won’t be able to claim any kind of mandate.” According to him, it is “because they have refused to articulate any vision for governing.”

The MSNBC contributor concluded that Republicans only platform is their meaningless “promise to obliterate Obama’s most significant achievement, the Affordable Care Act.” According to Robinson, their version of healthcare legislation “would be virtually identical,” to the Affordable Care Act, “although it would surely have a different name.”

To Robinson’s disgust, the Right has no new strategies for confronting ISIS and most offensively, “Republicans have even tried to politicize the response to the Ebola outbreak.” But most affronting to the left-wing Pulitzer Prize winner is Republicans have not “acknowledg(ed) the obvious,” that “during Obama’s time in office, unemployment has fallen dramatically, millions of jobs have been created and the economy is growing.”

When was the last time a Democrat un-ironically recognized anything a Republican has done? At least Robinson was able to recognize that “Democrats have” not “taken the high road by presenting their own fresh ideas.” “Mostly” he continues, “They threaten voters with scary descriptions of what Republicans would do on social and economic issues if given more power.”

Maybe Robinson should take his own advice and avoid doing the same.