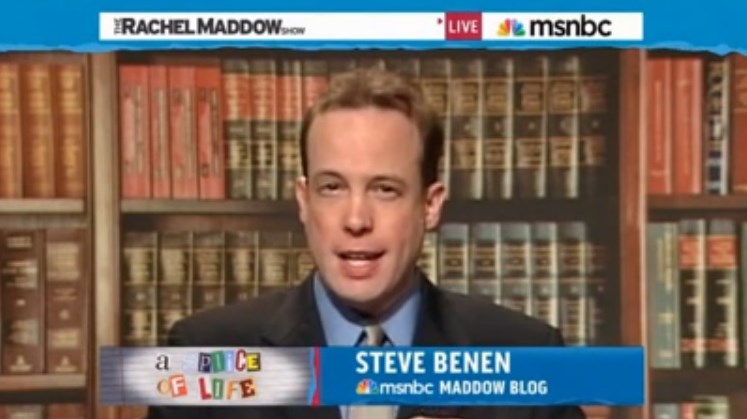 Steve Benen, the leftist blogger-turned-producer for The Rachel Maddow Show, could hardly contain his contempt in his September 25 post on MSNBC.com. Under the headline “New GOP ad campaign: ‘Republicans Have Feelings,’” Benen derided the newest efforts of Republican strategist Vinny Minchillo to bring some much needed perspective to the left wing’s hysterical slant against Republicans.

As Danny Vinik of The New Republic described it, the purpose of the effort is “to humanize Republicans demonized by the left as women-hating, nature-destroying Fox News addicts.” Of course in his column, Benen was sure to point out that “it’s almost as if we’re seeing a promotional video put together by a group most Americans find repulsive, so its members put something together for YouTube in the hopes of appearing normal.”

The campaign in question consists of a short one minute and thirty second video of pictures and text explaining how “Republicans drive Priuses” and “Republicans recycle.” In an attempt to humanize his political party, the former Romney strategist also created a new Facebook page requesting Republicans to upload personable photos.

Currently, these posts feature hateful comments by Democrats, such as “I'm sure republicans are people. I'm just not sure they possess empathy. Or at least empathy for anyone who isn't male, rich or white.” Pretty classy for the party of good taste and tolerance.

Vinik, for his part, missed the point completely. Instead of viewing the video as a reaction to hyperbolic rhetoric by left-wingers like himself, he stated that

If you’re a member of a political party, and you find it necessary to remind the public that your party is capable of human emotion and routine human behavior, then your party may have a very serious problem.

While the Maddow producer did take the time to point out that “Obviously, Republicans are human beings living normal American lives,” he snidely continued that “the overly defensive nature of the argument…implicitly suggest[s] that Republicans’ basic humanity is, at least for some, in doubt.”

He concluded that “this video no doubt intended to convey the opposite message, but ‘Republicans Are People, Too’ underscores a branding issue for which there is no easy solution.” Especially with bloggers like Vinik around.