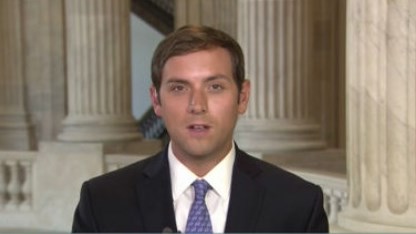 While CNN and MSNBC were too busy discussing the NFL and the investigation of Joan Rivers' death to give any time to the House Select Committee on Benghazi, MSNBC host Jose Diaz-Balart managed to carve out two full minutes of his program on Wednesday for NBC’s Luke Russert to blast the hearing for being partisan and expensive. Russert made sure to describe the committee from the Democratic point of view, explaining their misgivings over the lack of a “long-term strategy” and “planning in terms of the rules of the committee.”

Russert ended his left-wing report by blasting the hearing for “com(ing) in a tune…of $3.3 million cost to taxpayers.” Apparently MSNBC’s big government liberals only care about cost when conservatives are spending the money.

For his part, Diaz-Balart began the segment by leading that while the committee is “officially supposed to focus on how the State Department has implemented recommendations,” “some signs point at it to be possibly becoming more than that.” Russert agreed, wondering what the committee will “seek to answer that ha(s) not already been answered by the seven other investigations,” and what do Republicans “want to answer again.”

After Russert’s interview, Diaz-Balart invited political strategist Angela Rye and Republican strategist Adolfo Franco onto the show to talk “politics.” Per usual for a segment on MSNBC with a Republican guest, the interview ended up being two against one, with Diaz-Balart hyping how “the RNC is actually fundraising after Benghazi. Do you not see a very clear political motivation behind this…”

Of course, Franco’s response that “anytime there is a controversy…it is absolutely legitimate for a political party or anybody else to say we need to get to the truth” was completely ignored by the two liberals on set.

JOSE DIAZ-BALART: And let's really get some issues out of the way. Because this is officially supposed to focus on how the state department has implemented recommendations made by an independent review board two years. But some signs point at it to be possibly becoming more than that. NBC’s Luke Russert joins us from Capitol Hill. Luke good to see you this morning. What do we expect out of today’s hearing today?

LUKE RUSSERT: Well, as you mentioned, Jose today's hearing is technically supposed to be about the recommendations the accountability review board put forward in terms of diplomatic security. So at least expect it on the face for the Benghazi hearing to move forward in that type of direction. Sort of this idea of how can we as a country better protect our diplomats overseas so we don't lose another ambassador? But this issue has been politically very radioactive for some time.

There are folks on the right that say that is a cover-up. The Obama administration moved forward to the degree of Watergate and Richard Nixon. Folks on the left say it's nothing more than the GOP trying to pad their numbers and throw red meat to the base. What’s interesting though Jose is that there was a press conference yesterday from the Democrats on this panel and they have said, look, we've had no meeting regarding what the long-term strategy of this committee is. We have had no planning in terms of the rules of the committee. So we are really sort of lost in the wilderness right now, so to speak. So that's really something to keep an eye on, is what questions will this committee seek to answer that have not already been answered by the seven other investigations that have gone forward in some capacity on Capitol Hill.

The question they really want to get at were those talking points Susan Rice and the Sunday shows after this horrific incident. Were those cooked for political purposes? So far there's no clear evidence that's the case, but they want to investigate that again. Was there a stand down order given to the security personnel in Benghazi, protecting the ambassador? So far there's been conflicting reports but nothing definitive as yet the C.I.A. denies it. So these are the types of questions they want to answer again. It does come in a tune though of $3.3 million cost to taxpayers, Jose.