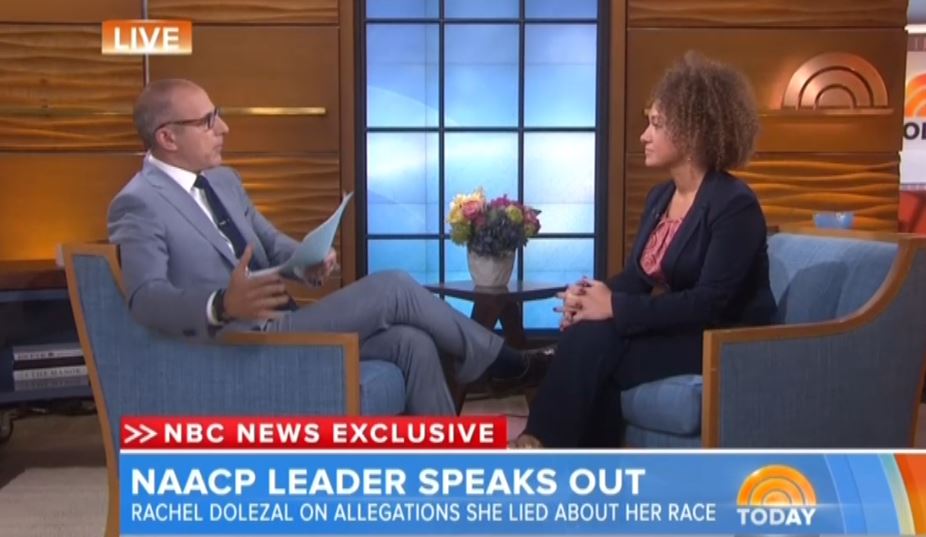 In a Tuesday article, Variety’s co-editor-in-chief Andrew Wallenstein slammed NBC for its series of exclusive interviews with ex-NAACP leader Rachel Dolezal: “...the most absurd aspect of NBC News’ Dolezal Day was how straight-faced its interviewers sat as their subject grew loonier the more she spoke.”

Lauer and Harris-Perry somehow didn’t ask a single question that really challenged Dolezal, who was given free rein to self-mythologize a story that even the most sympathetic observer would have to concede is just begging for some tough questions. Instead, it was as if the sheer peculiarity of an eloquent woman professing to be black despite being born white had knocked them so off-balance that they might have been better off just standing there slack-jawed.

Where the anchors really fell down was on keeping the focus on how many people Dolezal misled, regardless of how entitled she might feel she is to pursue her racial calling. Though they brought up the notion that she had acted inappropriately, as when Lauer point-blank asked her if she had been deceitful, when her answers betrayed zero sense of accountability for her actions, neither he nor Harris-Perry bothered to follow up.

He noted that “Guthrie fares much better than her colleagues,” but still took issue with the lack of pointed follow-up questions to Dolezal. Wallenstein explained: “...the most memorable moment of the interview, where she has Dolezal openly questioning whether her biological parents actually are, in fact, her parents....It’s the kind of moment that demands the interviewer shift the tone of the interview and point out how nutty Dolezal is sounding, but Guthrie just keeps politely pressing her as if everything is normal.”

Wallenstein added: “Rather than risk spooking their big ‘get,’ Guthrie et al. fail to ask the cutting questions that could send Dolezal from ripping her microphone off, like whether she has ever sought psychiatric treatment.”

He delivered a devastating parting shot to the network: “Given all the curiosity and how comfortable she [Dolezal] seems on camera even spouting nonsense, you can’t help but fear she could even eventually get hired as a correspondent focusing on racial issues. Given what we saw from NBC News today, she can’t do much worse than the talent they already have in house.”