On Monday's NBC Today, while discussing Senator Ted Cruz's announcement of his presidential candidacy, co-host Savannah Guthrie described the Texas Republican as "whip smart, a real conservative firebrand, knows how to throw those rhetorical bombs that the base loves."

Guest and Bloomberg Politics managing editor Mark Halperin observed: "I think he's a second-tier candidate right now. But he captures as well as anybody else part of what the Republican Party wants. They want someone to go to Washington and shake things up....Ted Cruz's challenge is to continue to say, 'I can change things but also I can manage things, I can make Washington work.' Because Republicans want that, too."

In a prior report, correspondent Kelly O'Donnell touted the liberal attack line against the Senator: "Critics have blamed Cruz for leading a conservative revolt that led to the 2013 government shutdown." She added: "His twenty-one-hour talk-a-thon even veered into Dr. Seuss's lane." A soundbite ran of Cruz reading Green Eggs and Ham on the Senate floor.

At the top of the 8 a.m. ET hour, fill-in news anchor Sheinelle Jones labeled Cruz as an "outspoken conservative" and repeated the talking point: "Critics have blamed Cruz for leading a conservative revolt that led to the 2013 government shutdown."

Here is a full transcript of O'Donnell's March 23 report:

LAUER: So could this push others to jump in sooner?

LAUER: It may only be two full days into spring, but-

SAVANNAH GUTHRIE: 596 days until election day. By the way, did you have Ted Cruz in your bracket?

GUTHRIE: The first one in.

LAUER: Perfect. And he's going to set the stage for what happens after this. It is our top story. The first puzzle piece now falling into place in the 2016 presidential race. Texas Republican Senator Ted Cruz throwing his hat in the ring overnight with that tweet right there.

[ON-SCREEN GRAPHIC OF TED CRUZ TWEET: I'm running for president and I hope to earn your support!]

He's making it official at an event in Virginia this morning. NBC's Kelly O'Donnell is there. Kelly, it's Texas Senator Ted Cruz, why Virginia? 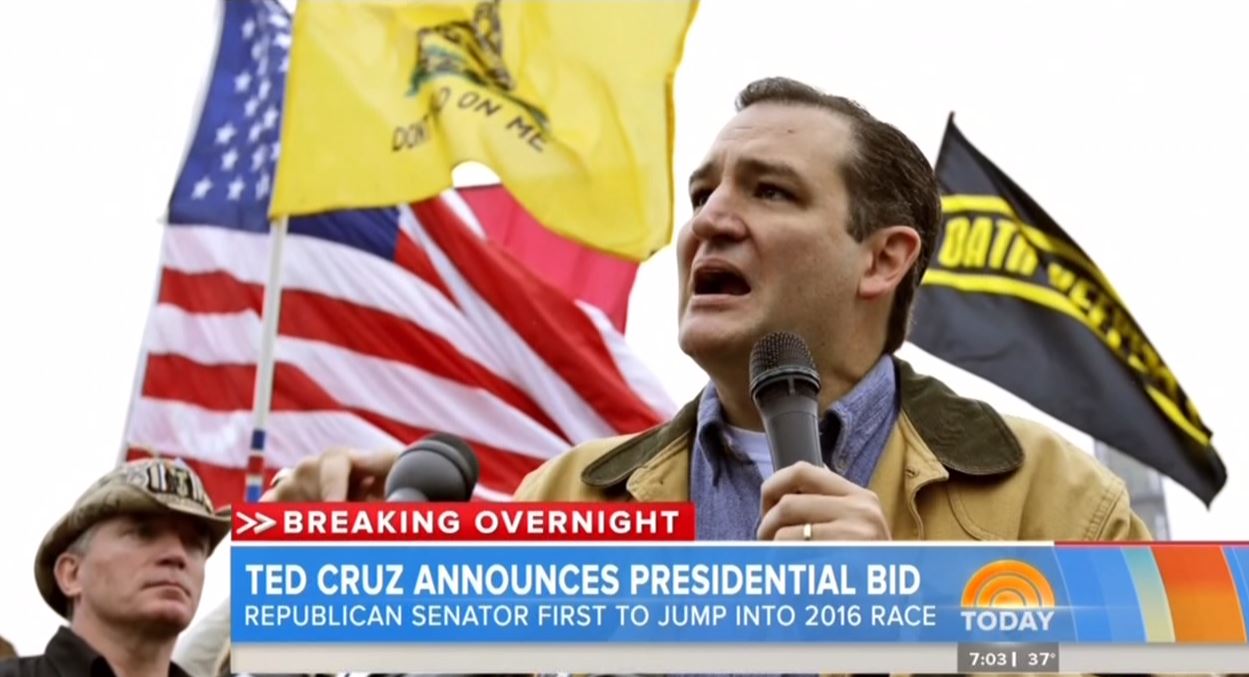 KELLY O'DONNELL: Well, you're right, Matt. We are a long way from his hometown of Houston. We're even far from those early decision-making places like Iowa or New Hampshire. But Ted Cruz has picked the home base of young evangelical conservatives to kick off his White House run.

A Cruz missile launched after midnight.

SEN. TED CRUZ [R-TX]: And I'm ready to stand with you to lead the fight.

O'DONNELL: In a video message tweeted to 350,000 followers, the Texas senator announced his run for president.

O'DONNELL: Sunday night, a casual Cruz, wife Heidi, and their two daughters did a brief rehearsal on the stage here at Liberty University. Choosing this evangelical headquarters, Cruz is sending a message.

CRUZ: If you say you support life and you support marriage, show me where you've stood up and fought!

O'DONNELL: With his Texas-sized ambitions, today Cruz bucked the establishment again by skipping the preliminary steps and jumping into a full-scale campaign.

VICTORIA DEFRANCESCO SOTO [UNIV. OF TEXAS CENTER FOR POLITICS & GOVERNANCE]: Either you love Ted Cruz or you hate Ted Cruz. But no matter what, you know that he is ideologically pure.

O'DONNELL: Critics have blamed Cruz for leading a conservative revolt that led to the 2013 government shutdown. His twenty-one-hour talk-a-thon even veered into Dr. Seuss's lane.

CRUZ: I would not eat green eggs and ham, I do not like them, Sam I am.

O'DONNELL: Last week in New Hampshire, a child's reaction to Cruz's rhetoric put a 3-year-old in the spotlight.

CRUZ: The whole world is on fire.

GIRL: The whole world is on fire?

CRUZ: Your world is on fire. But you know what, your mommy's here and everyone's here to make sure that the world you grow up in is even better.

O'DONNELL: Also new this morning, Ted Cruz has released a biographical video to introduce himself. He's 44, only been on the national scene for a couple of years, and he's talking about this new generation as a way to try to separate himself, contrast himself, from other candidates like Jeb Bush. Savannah.

GUTHRIE: Alright, Kelly O'Donnell, thank you so much.