MSNBC Contributor Insists 'Fraternities Need to Be Abolished'; They're Like Mafia, Biker Gangs

Back in early December 2014, I tackled a rather poorly-argued screed by Andrew Lohse over at Time magazine's Ideas blog about the liberal writers call to abolish fraternities, insisting they were irredeemably linked to antebellum slavery. Fast forward to today -- nearly two weeks after the infamous video of SAE brothers in Oklahoma singing a chanting a racist song.

This time Lohse is rehashing the same argument at MSNBC.com explaining "Why fraternities need to be abolished":

These incidents aren’t outliers or cases of individual impropriety, but data points in a clear historical pattern showing the fraternity system to be a structurally flawed vestige of the 19th century. Simply put, fraternities need to be abolished.

The idea that Greek organizations can self-reform or self-regulate – especially on an issue as crucial as campus sexual assault – is as ludicrous as arguing that Goldman Sachs should run the SEC. After all, a much-cited 2007 study showed that fraternity members are 300% more likely to commit rape than non-affiliated students. This study wasn’t an outlier, but the third of its kind confirming the same data.

Expanding sororities to counterbalance the power of frats is no solution, either. Numerous studies have shown that sorority membership is a clear risk factor for sexual assault, especially an assault involving drug or alcohol coercion – a Harvard School of Public Health study indicates that even just living in a sorority house made a woman three times more likely to be raped.

To Lohse's mind, the answer is not sensible regulation -- both by frats themselves and by campus authorities -- but outlawing the organizations. Lohse made sure to work in other boutique left-wing justifications -- income inequality, for example -- and to compare frats to violent biker gangs or the mafia in order to bolster his call for banning Greek life on American colleges (emphases mine):

How can we expect higher education to be a ladder of opportunity for all students if neither universities nor the federal government can ensure basic safety by eradicating the hostile environment that is privileged, perpetuated, and protected by these organizations? 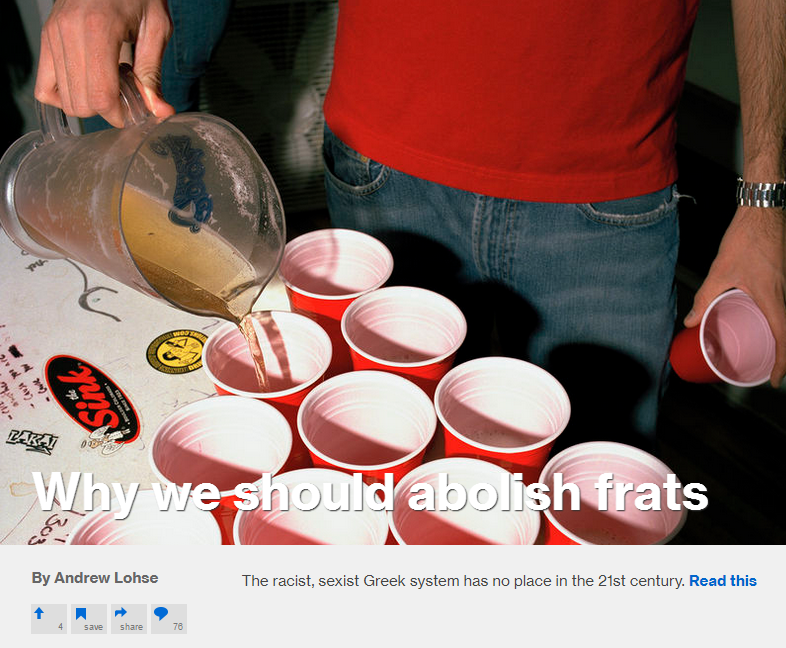 As a former member of Dartmouth College’s SAE – a house notorious for its foul hazing – I’ve witnessed how the hyper-masculine groupthink that supposedly builds a fraternity “brotherhood” is the same cult psychology that teaches young men to do things they’d never do on their own.

These organizations’ flaws are systemic, and the symptoms can’t be comfortably reduced to questions of individual behavior. No frat bro exists in a vacuum. Not to mention how these organizations use secrecy to evade scrutiny, the “philanthropy defense” to get themselves excused, and Washington, D.C. lobbying to suppress any reforms.

Fraternities are big business. They own and operate more than $3 billion worth of real estate and take in more than $150 million of tax-free revenue each year. They’re represented by sophisticated trade organizations and a political action committee, FratPAC, that in 2013 succeeded in killing a piece of desperately-needed anti-hazing legislation in Congress.

Believe it or not, we don’t need fraternities to raise money for philanthropic causes. Corporations, religious organizations, non-profits, and student service groups easily produce a greater social good without the obvious human cost inherent to exclusionary, sex-segregated clubs built around binge drinking and hazing. Unlike fraternities, neither the Salvation Army nor the United Way have ever beaten one of their volunteers to death or left them to die of alcohol poisoning with their hands zip-tied after an initiation.

The “philanthropy defense” is a diversion. It always has been. The best available data puts Greeks’ collective charitable giving at about $7 million a year – a statistical anomaly compared to the more than $300 billion donated in America in sum total. Why do frat apologists believe that a small amount – or any amount – of philanthropy can wipe away the stain of repeated hazing deaths? Why do they argue that a few bake sales outweigh the rigorous research and high-profile documentaries like “The Hunting Ground”  that show fraternities to be drivers of rape culture on campus?

To be clear, fraternities aren’t the only sketchy organization to use philanthropy to cover for other activities. Hell’s Angels donates toys to underprivileged children every year – but the Department of Justice still considers them an organized crime syndicate. Apparently, they just don’t have good lobbyists. Why do we excuse some systems of organized crime, but censure others? It’s not just white privilege, but something else ingrained in American life – classism, sexism, elitism, and the fact that a different set of rules exist for the rich, their progeny, and their secret clubs.

Rather than taking personal responsibility for his sins as a drunken frat boy, Lohse seems intent on casting himself, ultimately, as the victim of a Greek system which is intrinsically evil and hence irredeemable. And hence his crusade against freedom of association on American college campuses.

Lohse is entitled to his opinion, however extreme it may be, but it is telling that MSNBC would give him a platform for such a clumsily argued, invective-spewing radical leftist hit piece.