Yet again Hardball host Chris Matthews insisted that 47 Republican senators the other day violated federal law by penning an open letter to the government of Iran regarding ongoing nuclear talks between that regime and the Obama administration. In a March 11 segment on the matter, Matthews played video of Secretary of State John Kerry criticizing Republicans for sending the open letter. (see video below)

Of course Matthews failed to relay to his audience how, as a senator, Kerry arguably violated the Logan Act himself with freelance foreign policy visits to foreign capitals.

As Rafael Medoff of the Weekly Standard reported yesterday afternoon at the conservative magazine's blog:

"In 36 years in the United States Senate, I cannot recall another instance" in which senators intervened in the conduct of U.S. foreign policy,” Vice President Joe Biden declared, outraged by the "open letter to the leaders of the Islamic Republic of Iran," signed by 47 Republican senators.

But in fact, a number of U.S. senators, including then-Senator and now Secretary of State John Kerry, have contacted unfriendly governments, in opposition to the policies of the White House at the time. 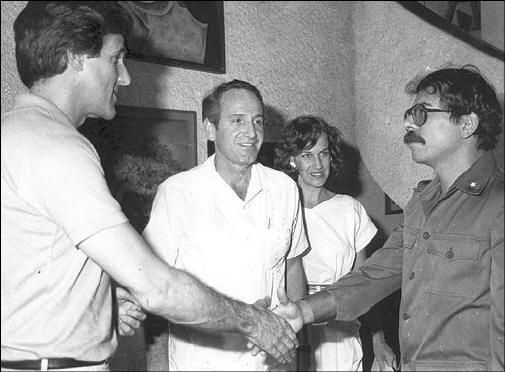 In 1985, for example, then-freshman Senator John Kerry traveled to Nicaragua for a friendly get-together with the Sandinista president, Daniel Ortega. The position of the Reagan administration was to support the opposition Contras. Kerry wasn't much interested in the administration's position. Upon his return to the United States, Kerry met with President Reagan to convey a message from Ortega. Reagan "wasn't thrilled," Kerry later told the New York Times. This week, it's Kerry's turn to be less than thrilled.

In late 2006, Democratic senators Kerry, Chris Dodd (Connecticut), and Bill Nelson (Florida), as well as one Republican who later became a Democrat, Arlen Specter (Pennsylvania), traveled to Damascus. That is, at a time when the policy of the Bush administration was to isolate the Bashar Assad regime because of its aggression in Lebanon support for terrorism, the senators decided to show their support for renewed U.S. relations with Syria.

They also had nice things to say about Syria's dictator. “I feel quite confident in saying this was a conversation worth having and that the administration ought to pursue it,” Kerry declared.

Matthews has insisted previously, and reiterated on this evening's Hardball, that the 47 senators who signed Monday's open letter engaged in a violation of the Logan Act of 1799. Here is the full text of that act:

This section shall not abridge the right of a citizen to apply, himself or his agent, to any foreign government or the agents thereof for redress of any injury which he may have sustained from such government or any of its agents or subjects.

During a segment with moderately-conservative Washington Post columnist Kathleen Parker -- who objects to the 47 senators' letter -- Matthews decried Sen. Rand Paul (R-Ky.) as a "chicken" who would be in trouble with the feds were the Obama administration to enforce the Logan Act: 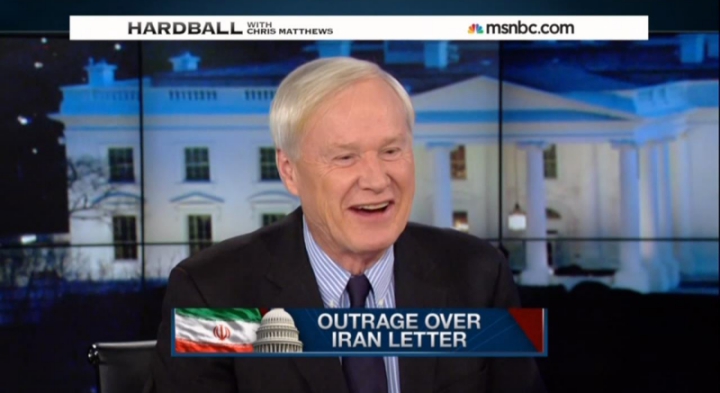 KATHLEEN PARKER, columnist: First of all, I always ask the question, "What good does this do?".... I feel that this made us look silly. I'm frankly embarrassed for the 47 senators who signed and I'm extremely sorry that some of those that are seeking higher office would put their names to something like this. It undermines the president, it's basically saying to, I mean, you're writing a letter to the Ayatollah?! Come on. I mean, you know when you're writing letters to the Ayatollah while your president is negotiating, you're probably on the wrong team.

You know, if indeed they wanted to get that message to senator, I mean to Secretary Kerry and the as Rand Paul said, then by all means, write the letter to them. Take out a full-page out in the New York Times or the Washington Post. I mean you could [inaudible]

CHRIS MATTHEWS: They have pretty good mail down here in Washington.

MATTHEWS: Why do you think Rand Paul was unusually chicken? Because he's usually a gutsy guy in being an independent guy. He said I signed it, but I was really sending that letter to President Obama. No he wasn't. He was sending a letter to another government, and probably, if you enforced the law, in violation of the Logan Act. You can't your own foreign policy. You can't.

Briefly, in closing, I must address Parker's quip about writing the Ayatollah. The 47 senators did NOT send a letter to the Ayatollah. They sent an open letter to the entire government of the Islamic Republic of Iran. President Barack Obama, of course, has reportedly been secretly corresponded with the unrepentant "death to America" theocrat according to the Wall Street Journal:

The Iranian cleric wrote to Mr. Obama in recent weeks in response to an October presidential letter that raised the possibility of U.S.-Iranian cooperation in fighting Islamic State if a nuclear deal is secured, according to an Iranian diplomat. The supreme leader’s response was “respectful” but noncommittal, the diplomat said.

A senior White House official declined to confirm the existence of that letter. But it comes as the first details emerge about another letter Mr. Khamenei sent to the president early in his first term.

“The letters of the American president have a history of some years, and in some instances, there have been responses to these letters,” said Ali Shamkhani, secretary of Iran’s Supreme National Security Council, in November. He added that there were “contradictions” between policies laid out in the letters and U.S. actions, according to a translation of Mr. Shamkhani’s comments by Al Monitor, a Mideast-focused website.

Despite its airing of grievances, the first letter in many ways began in earnest the recent historic thaw after more than 30 years of frozen U.S.-Iranian ties, because Mr. Khamenei also didn’t rule out the possibility of accommodation with the U.S.