Hardball host Chris Matthews just doesn't get why Hillary Clinton's email scandal is all that big a deal.

When you leave the government, I was a speechwriter years ago at the White House, you had to turn over all the speech drafts that you had written. All of them, even though you were proud of a couple of them, you were supposed to turn them all over. There was even a ridiculous, I thought, rule, you're not even to Xerox them. You are to turn them all over, all of your materials.

So I don't know what this formal custom, how often it's honored, how often it's not. It's almost like don't take your pens home and use them at home. I wonder if it's one of those rules.

David Axelrod, you've got experience with this. What did, do you think this is something worth the top of the fold of the New York Times? Hillary Clinton didn't use their email instead of her government email. Is this worthy of this kind of hootin' and hollerin'?

But wait, there's more. Later in the program, during a separate panel discussion, Matthews seemed to suggest that Mrs. Clinton perhaps had no final say over whether or not she had a State Department-issued email account:

RON FOURNIER: When you know that you're seen as someone who um, believes the ends justify the means and who will cut any corner to get ahead, who is not authentic, who plays by your own set of rules, why would you do things like not have a public email and have all your emails secretive? Why would you do something like taking money from foreign countries that support --

CHRIS MATTHEWS: That wasn't only her decision.

FOURNIER: She's the one who's running for president. It's her decision. She's taken money from countries that suppress women and support terrorism. That's the kind of thing that either you're really stupid -- and she's a really bright woman -- or you're, you're um, have some basic blind spots, which is what I think it is, they just don't see how bad this stuff is, or there's a part of you who, maybe you just don't want to do this [run for president].

Moments later, as Bloomberg's Jonathan Allen reminded the audience that Hillary's official correspondence is, essentially "our emails" as American taxpayers, Matthews shot back:

Wait a minute! Suppose you work at the State Department and you happen to be Secretary of State, which is a fabulous position to hold, and you write an email to your husband, "Bill, I'll see you at Nora's, Cafe Nora for breakfast.... Why would all that get in the mill of government documents?

"It doesn't have to," Allen replied. "Honestly, if you look at the way this is set up, it was set up with a forethought to evade the spirit of the open records laws. It's just, it's the pattern of almost paranoia."

Seeking the lower the bar, Matthews focused on exonerating Hillary from criminal malfeasance, if not ethical transgression, asking Martin, "What was the law at the time she did this? I thought that the law didn't come into effect until after [she served as Secretary of State]."

Moments later, Matthews repeated his earlier complaint to Steele and Axelrod about the New York Times coverage of the scandal. Allen's response and the agreement by the rest of the panel seems to have stunned Matthews:

MATTHEWS: So you don't believe this story's big enough to be on the top of the New York Times this morning? 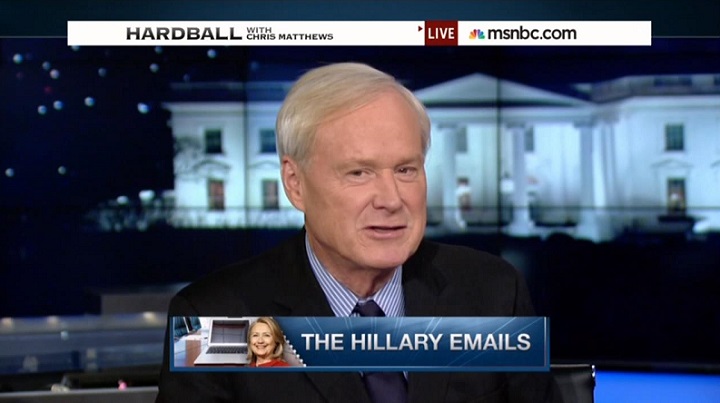 ALLEN: On one day? Sure. Do I think it's going to cost her the presidency, no? The trait might be a problem. The paranoia.

RON FOURNIER: Oh yeah! That's why she did this. She's paranoid.

MATTHEWS: OK, OK. Heh, do you want to say a non-paranoia vote here? I've got two paranoids, you sure you want--?

SUSAN PAGE, USA Today: Clinton defenders will say we jump on things about them that we would let go by with somebody else.... But the fact is she knows that she's subjected to a standard and therefore it shouldn't be a surprise.

MATTHEWS: It's a chicken and egg thing.

FOURNIER: They have set that standard.