On Thursday, Senate Republicans voted against cloture on a constitutional amendment which would gut the First Amendment's free speech protections. Naturally MSNBC.com portrayed it as the GOP blocking "reform" of campaign finance.

"New Mexico Democratic Sen. Tom Udall had proposed a Constitutional amendment to allow Congress and the states to govern campaign spending for federal candidates, an amendment that would have overruled the Supreme Court’s recent Citizens United decision, which allows corporations and wealthy individuals to spend unlimited amounts in political campaigns," Timm explained. Naturally, however she failed to link to the actual text of the legislation, wherein a discerning reader might see the obvious problems (emphasis mine):

Section 1. To advance democratic self-government and political equality, and to protect the integrity of government and the electoral process, Congress and the States may regulate and set reasonable limits on the raising and spending of money by candidates and others to influence elections.

Section 2. Congress and the States shall have power to implement and enforce this article by appropriate legislation, and may distinguish between natural persons and corporations or other artificial entities created by law, including by prohibiting such entities from spending money to influence elections.

Section 3. Nothing in this article shall be construed to grant Congress or the States the power to abridge the freedom of the press. 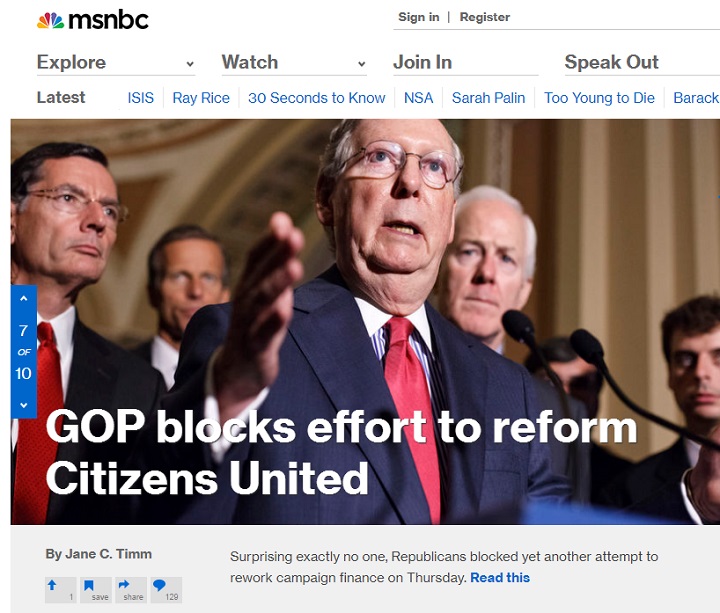 Here are four obvious problems: 1) Who's to say what is a reasonable and what isn't? 2) This amendment not only would allow limiting campaign contributions but empower the states and Congress to restrict spending by political campaigns, a gross violation of free speech rights. 3) Leaving aside business interests, "corporations or other artificial entities" can also include churches, synagogues, civic associations, charities and all other manner of non-profit groups.4) The amendment explicitly carves out the "press," suggesting this is a cynical means of regulating and gagging conservative speech while the mostly-liberal legacy media has free rein to stack the deck in the nation's political discourse.

Timm failed to dive into such objections, but she did allow Republican critics the last word by quoting Senate Minority Leader Mitch McConnell in the closing paragraph:

Republicans spent the debate arguing that massive political donations are actually a sign of free speech.

“I have to say it’s a little disconcerting to see the Democrat-led Senate focusing on things like reducing free speech protections for the American people,” Republican Senate Minority Leader Mitch McConnell said Thursday, according to The Hill. “This is what they chose to make their top legislative priority this week? Taking an eraser to the First Amendment.”