Who wants to live in an America where the government behaves like the Stasi in East Germany or the KGB in the Soviet Union, against which we waged a Cold War because of what they did to their people. That's basically what DHS and NSA and all those three-letter things that are in the federal government are doing to us now, Neil [Cavuto].

Napolitano made these comments in reaction to news that the federal Department of Homeland Security is requesting major retailers voluntarily monitor customer's purchasing habits to see if there's a pattern in purchasing that suggests someone is buying the necessary ingredients and implements to say create an improvised explosive device.

Later in the segment the Fox News senior judicial analyst added that he thinks "the worst thing that happened with respect to our civil liberties" post-9/11 is that:

what the government does doesn't trouble us anymore, that we accept it and expect it, because we believe this nonsense that by giving up our liberties, we will somehow be kept safe. As a result, your children and your grandchildren will grow up in a society and never know the privacy that our parents and grandparents and we knew.

"Scary stuff," host Neil Cavuto added in assent to close out the segment. 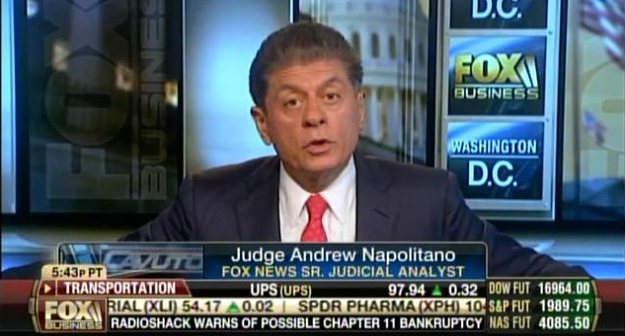