While the media anticipate the upcoming World Cup final, they overlook this tidbit: player Tobin Heath’s faith in God.

Heath, a two-time Olympic gold medalist, plays on the United States women's national soccer team headed for the World Cup final on Sunday. During the games leading to the World Cup final, Heath took to Twitter and Instagram to say, “Thanks Lord.” In a 2011 interview Heath revealed even more insight about her Christianity and a want to evangelize, declaring, “That’s why I play. I play to glorify Him.”

Leading up to the World Cup final, Heath routinely expressed thanks to God on Twitter: 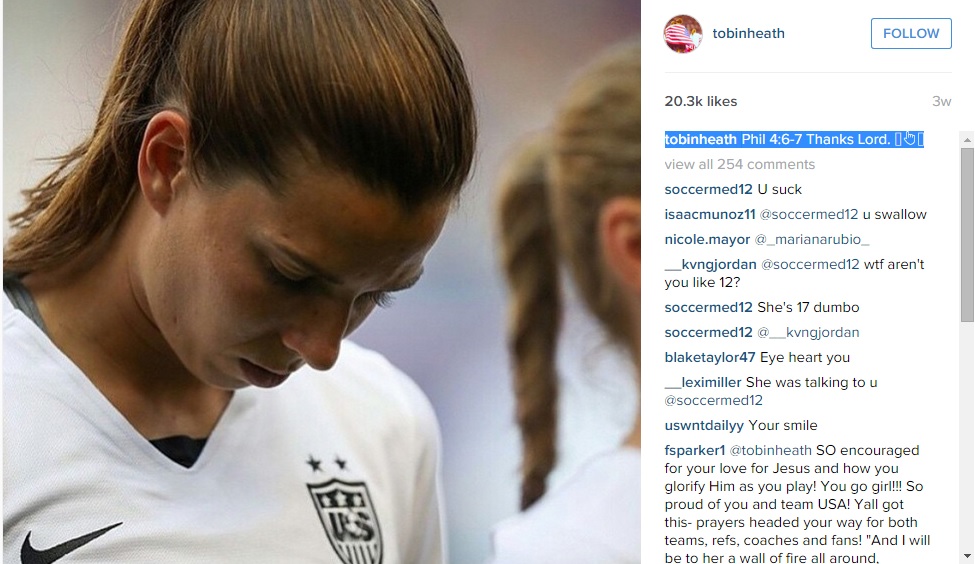 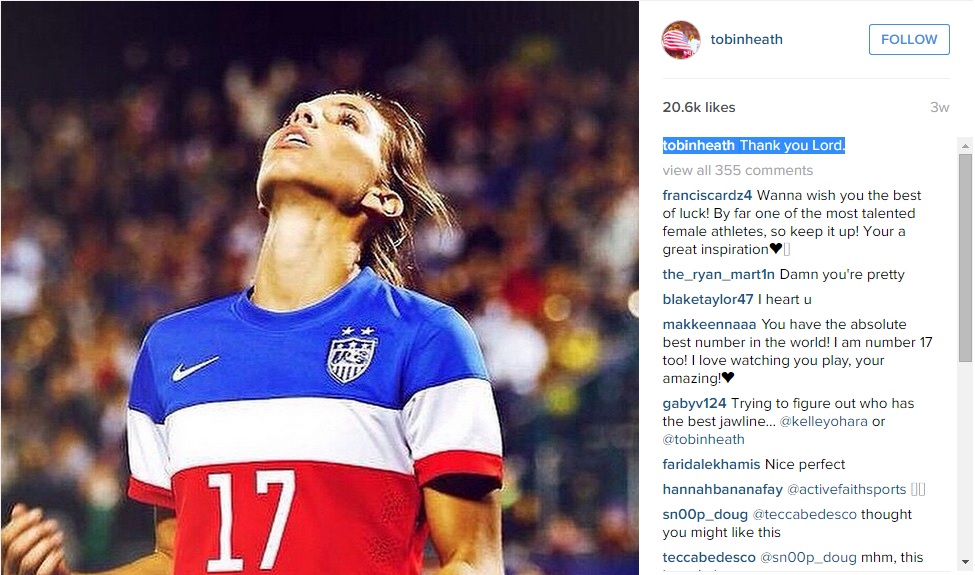 In a 2011 interview with BeliefNet.com, Heath expressed wanting to exemplify her faith as a role model for young female athletes.

“[I[f you see [being a role model] as a platform where you can pour into others for Jesus with love, that’s where I want to be,” she said. “Becoming known or noticed in my sport isn’t what drives me to work hard and want to be the best I can be. It’s Jesus. That’s why I play. I play to glorify Him.”

Through her career as a soccer player, Heath intends to praise God.

“I try to keep that as my motivation when I step out on the field every day whether it’s practice or a game. It’s to work as hard as I can in thankfulness for what He’s given me and hopefully some of that can come back to Him,” she said.

She also uses her career to provide an example to those she works with: her teammates.

“They see where your foundation lies in those moments [of life’s ups and downs],” she urged. “You can also be there for them to share the love of Christ to them through those times when they’re in need and desperate for some truth in their lives.”

“It’s about Him being known and not in a way that forces it upon other people but in a way that lets people know how He’s transformed my life and how He’s given me purpose and meaning and love and satisfaction,” she said. “I’m just a vessel trying to do my part with what I’ve been given.”

At another point in the interview, she stressed, “I can’t even imagine going through life without my relationship with Jesus.” She added, “So much of it is me relying on Him and me needing Him, not just in those crazy circumstances but in the day-to-day activities.”

And her faith hasn’t changed.

Quoting Hillsong United lyrics, Heath tweeted in April, “I touched the sky when my knees hit the ground.”

Earlier this year she also stressed, “Love being reminded of Gods love for me. #passion.”

ABC’s Good Morning America wished Heath a Happy Birthday on June 29, but none of the broadcast networks have yet reported on her faith.

When U.S. soccer team goalkeeper Tim Howard made headlines in 2014, the news hesitated to report on his belief in Christianity.