She’s rumored to be a comedian, but her real-life views sure aren’t funny.

Comedian Roseanne Barr appeared on HuffPost Live on April 17 to talk about her upcoming documentary Roseanne for President!, detailing her 2012 presidential candidacy. After a nudge by host Josh Zepps, Barr said that a woman aborting her unborn child is “nobody’s goddamn business” – and called for the end to “this bullsh*t war” on abortion.

The Huffington Post’s Josh Zepps (also an NBC Today contributor) introduced Barr as “one of the most influential comics alive” before asking Barr about Oklahoma and Kansas banning “the most common form of second-trimester abortion” – or “dismemberment” abortion.

“Do you have any thoughts about the trajectory of women’s rights in America?” Zepps asked.

“It pisses me off when they say ‘pro-choice’ and they only mean abortion,” she said. “That pisses me off because you’ve got a lot more choices than whether you’re going to have an abortion or not.”

Echoing politicians like Rep. Debbie Wasserman Schultz, Barr continued, “But I do think that’s between a woman and her doctor, and it’s nobody’s goddamn business except hers and her doctor and her personal whatever that is that’s making her do that choice.”

But even Barr had her limits as she shied away from late-term abortions.

“[T]he late ones,” she admitted, “they really, really bother me.”

But there was a reason for them. Blaming bureaucracy, Barr expressed why late-term abortions happen – according to her. 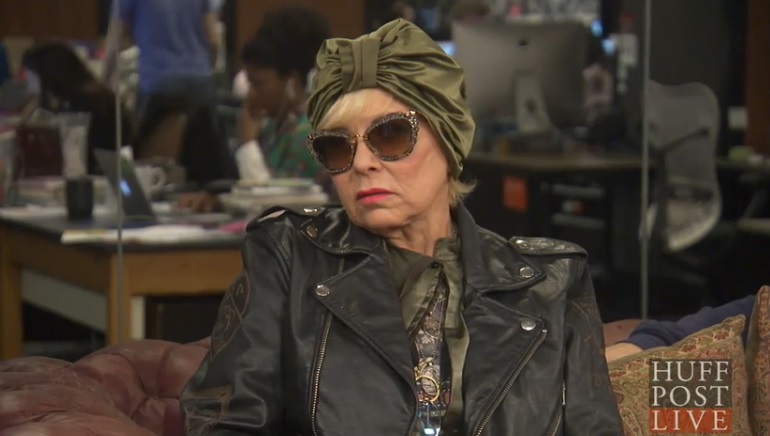 “It’s like can’t we invent a pill that you take the day after?” she suggested. “I mean, I think it exists.” (Zepps confirmed it did.)

“Let’s be logical,” she concluded. “Let’s stop this bullshit war.”

Stealing some of her energy, Zepps added in his two cents.

“There’s not a lot of education,” he said, “in the most conservative states.” “The very people who decry abortion the most,” he reasoned, “are the people who want to prevent sex education that would give the information to young women to know about that pill which would help them avoid the abortion in the first place.”

HuffPost is a fan of pro-abortion guests, including an After Tiller abortionist who claimed women abort “to be good mothers.”

Also not a stranger to discussing abortion, Barr has publicized her views with previous tweets including: