Amid reports that Ebola is "spiraling out of control," Americans are being told that fiscal conservatives in Congress are to blame for this mess. According to the director of a government health agency, we would almost surely have an Ebola vaccine today – if Congress had only authorized about another $9 billion to the appropriate government agency.

That’s what Dr. Francis Collins, Director of the National Institutes of Health (NIH), told The Huffington Post in an article posted October 12, 2014. Collins said, “Frankly, if we had not gone through our 10-year slide in research support, we probably would have had a vaccine in time for this that would've gone through clinical trials and would have been ready.”

But scandal and waste at NIH, the government’s “flagship” health agency, undercut Collins’ blame-shifting and pleas for more money.  Amid allegations that NIH mishandled deadly pathogens like smallpox and wasted money on studies like a $386,000 project about “Massage in Rabbits,” Collins lacks credibility when going to Congress for “emergency supplemental appropriations” to speed work an Ebola vaccine. 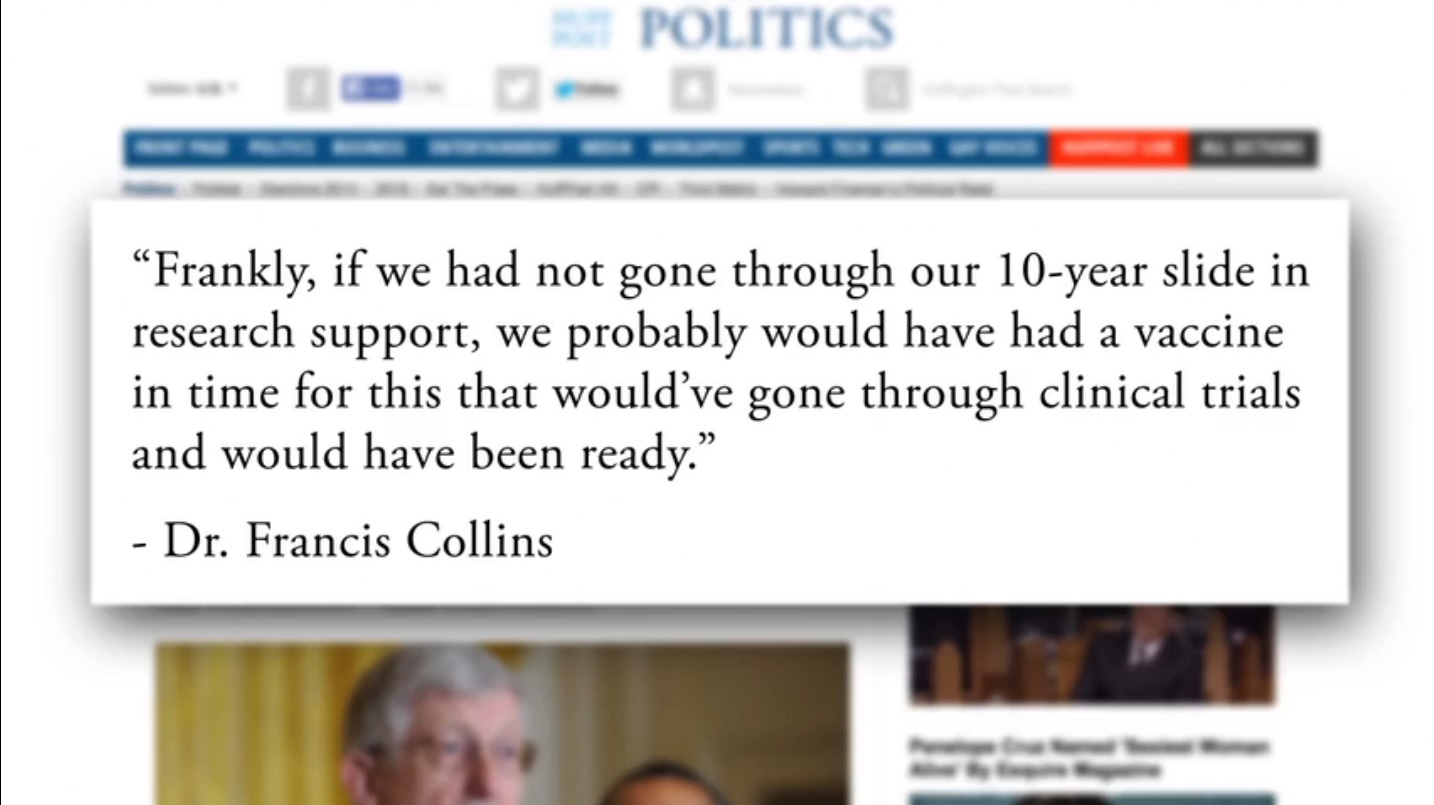 NIH has worked on an Ebola vaccine for 13 years, during which time NIH received record funding, stimulus money, and a $1 billion budget increase in 2014. Yet, NIH failed to produce a workable final product. Considering Collins’ own doubts about whether the spread of Ebola is a serious threat to Americans, and not just a fear of paranoid “cable news people,” it is questionable whether an Ebola vaccine was ever a priority under his tenure at NIH. Management decisions, rather than budgets, may be a better explanation for why NIH has yet to produce a vaccine.

Based on the plethora of other wasteful research projects NIH spent grant money on, an Ebola vaccine certainly did not appear to be a high priority.  Forbes published a sampling of 18 wasteful programs paid for by NIH as of October, 2012. This research ranged from a study on “Massage in Rabbits” (costing taxpayers $386,000) to numerous studies exploring the effects of meditation (costing hundreds of thousands of dollars each).

NIH has also continued funding ethically-questionable embryonic stem cell research under the leadership of Collins, who was nominated as director by President Obama in 2009. He lauded the Supreme Court’s ruling in Sherley v. Sebelius on January 7, 2013, which legally allowed stem cell research to continue. Collins wrote in a statement “that NIH will continue supporting this promising research.”

Competency of NIH personnel was also questioned in recent months after revelations that live smallpox samples were found in an NIH storage room, along with 327 vials dengue fever, influenza, and spotted fever bacteria. This led NIH officials to admit they were “carefully examining our policies and procedures regarding the security of our laboratories and storage of biologic specimens,” according to The Washington Post.

Not only is the apparent lack of competency and efficiency at NIH worrisome, so is Collins’ seeming lack of serious concern over Ebola. In his interview with The Huffington Post, Collins simultaneously decried Congress for not giving him “emergency” funds to find an Ebola vaccine and attempted to calm “fears this [Ebola outbreak] might somehow take over our country, which is not going to happen.” He indicated there is actually not much reason to be frightened of Ebola, since it is “the cable news people who are whipping this up, and frankly sometimes using it for political purposes to sort of shoot at the government.” Collins seems to have communicated one message to Congress and another to the American public.

Collins also painted a contradictory picture of the NIH budget. Despite his assertion that NIH funding was has been slashed, he ignored that the agency’s budget drastically increased during the late 1990s and early 2000s. Between 1998 and 2004, NIH’s budget more than doubled in nominal terms, according to a Congressional Research Service report from Mar. 14, 2014. In 2009 and 2010, stimulus funds pushed the NIH budget to an all-time high.

Even accounting for inflation, NIH’s budget for 2014 is only about 5.5% lower in real terms than it was in 2001, when research on the Ebola vaccine started. Funding for NIH actually increased by $1 billion in 2014, Congressional appropriations remaining relatively stable in nominal terms during recent years.