The heated debate over the Confederate battle flag has drawn a partisan but not on the side you might expect -- longtime libtalker Ed Schultz.

Before appearing in his hour-long MSNBC show on weekday afternoons, Schultz posts a podcast on his website, as he's done since ending his radio show in the spring of 2014. It was during Thursday's podcast that Schultz provided surprising commentary about efforts to eradicate symbols of the Confederacy following the massacre of nine African-American churchgoers in Charleston, S.C., by a white supremacist. 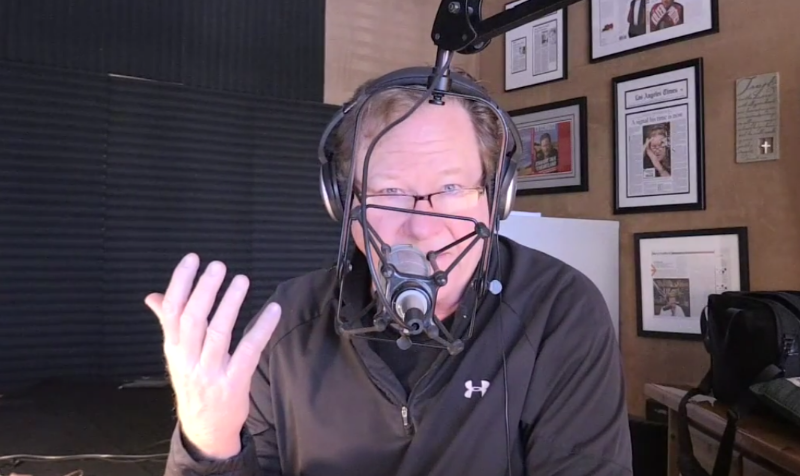 Schultz preceded his remarks with a clip from Alabama Gov. Robert Bentley on his decision to remove Confederate flags from a Civil War memorial site at the state capitol, a move Schultz dismissed as "self-serving." That was the first sign Schultz is not marching in lockstep with other liberals on this. Others quickly followed (audio) --

You know, I understand the effort to remove the Confederate flag from state capitols in the South and anywhere else in this country. There's no doubt about it that it sends the wrong message. But at this point, I asked the question, is it overboard? And I don't understand the attempt to erase American history as if it's going to change our course as a nation. It's not.

The desecration of our nation's history, I think, is dangerous and I think it's unproductive. American history and our roots as a nation needs (sic) to be, number one, understood. It needs to be properly interpreted. It needs to be taught. And at a level, I think, it needs to be respected to be put in its proper context to the recognition of what has developed our great nation and how we have moved forward.

Now what that flag represented at the time is no longer relevant in modern-day society. It's no longer relevant to our moral compass. It's no longer relevant to who we are as a country. And I think it's display in public places, number one, is misplaced and it should be corrected and it is being corrected. But to erase the roots of our country serves no purpose for future generations. There's now a big discussion about, what are we going to do with statues that are inside the United States Capitol? I think you can make the case that the Capitol is a museum because of all the incredible historical events that have happened in our Capitol, and it is a part of our national discussion about where we have been.

And so, I think it serves no purpose to this country for future generations if we're going to totally rewrite the history books and I see an avalanche starting with the removal of the Confederate flag. We have to do this in a smart way.

No sooner had Schultz said this that he began to backpedal --

It does underscore what a great nation we have become and what we've evolved to that what we're doing and reacting and understanding, what we have to do as a society. The sad commentary here is that it took the death of nine people for us to realize, you know, maybe that flag is the wrong message. Maybe that flag is the wrong symbol. Maybe we ought to take it down. We can take it down and it's not going to change anybody's life. But it is going to send a better message to America that where we were as a country back then is not where we are today.

At the start of his commentary, Schultz said, "I asked the question, is it going overboard"? When and where did he ask this, you might wonder. It was during The Ed Show on MSNBC this past Wednesday, the day before the podcast excerpted here, during a discussion with two guests obviously chosen in the hope that sparks would fly -- African-American academic Michael Eric Dyson, a Georgetown sociology professor, and Greg Stewart, a member of the Sons of Confederate Veterans and executive director of Beauvoir, the post-Civil War home of Confederate president Jefferson Davis.

"Mr. Stewart, I want to start with you and I'm going to give you a leading question here if I may to qualify it," Schultz said. "Is the reaction to the Confederate flag in this story overboard in your opinion?"

"Obviously," Stewart replied. "It's a shameless exploitation of a tragic event." Dyson, needless to say, disagreed with Stewart, though the conversation was respectful on both sides and sparks never flew. (The entire discussion is posted here). But within 24 hours, Schultz had aligned with Stewart's perspective and not that of Dyson, a frequent guest with whom he rarely disagrees.

Earlier in the segment, Schultz cited a tweet from Weekly Standard editor Bill Kristol that read, "The Left's 21st century agenda: expunging every trace of respect, recognition or acknowledgement of Americans who fought for the Confederacy," while Schultz also quoted Kristol as saying that if he were a South Carolina legislator, he would as a "Union guy" vote to take down the Confederate flag.

Schultz's response -- "His statements seem to have a sharp contrast." Much like Schultz on his podcast the next day.