It's one thing to mock the presumptive Democrat nominee for president a year and a half from the election. Let's see where the left's leading court jester stands when it actually matters.

Still, it is surely worrisome to Hillary Clinton's apologists that Jon Stewart is among her growing legion of skeptics after Clinton's attempt to clear the air about her private email account for official business while secretary of state made the issue even cloudier.

On Comedy Central's Daily Show last night, Stewart played clips from Clinton's press conference at the United Nations, interspersed with his snarky commentary. Included was Clinton's dubious claim that she used a single handheld device while secretary of state for the sake of "convenience," rather than one for personal correspondence, a second for those government-related --

STEWART: Two problems with this answer -- first, since Clinton left the State Department, her single-device preference has completely gone away.

CLINTON (shown at Silicon Valley Conference for Women on Feb. 24): I have a, you know, an iPad, a mini-iPad, an iPhone and a Blackberry.

STEWART (picking up the thread): A Sidekick, a Veta, a Zune, Nintendo Power Glove, uh, can with two strings, fax machine, Tamagotchi, and a burner phone, I just snap that in half and toss it into the Chesapeake. Oh! I've said too much! And second, you are a person that wants to be president -- which is a super-inconvenient job. Did you know that everywhere you go, you not only have to carry a phone but a briefcase filled with nuclear codes? So you can't suddenly go, oh, briefcase kind of a hassle to carry, can I just put the codes on my phone? Because then halfway through your term you butt dial a nuclear strike on Mexico.

Look, here's the thing -- the rule exists so that the government can automatically archive all your work emails -- but since you did it your own way, your work emails are all mixed up with your personal emails, and now they have to be separated out. Let me guess who you chose to handle that delicate job --

CLINTON (at UN presser): What did was to direct, you know, my counsel to conduct a thorough investigation ... I, uh, am very, uh, confident of the process that we conducted. ... I have, uh, no doubt that we've done exactly what we should have done.

STEWART: And I have no doubt that you have no doubt. And maybe you did hand over everything you were supposed to. But when we all agree to do things a certain way, and you do it in a different way, it looks weird. 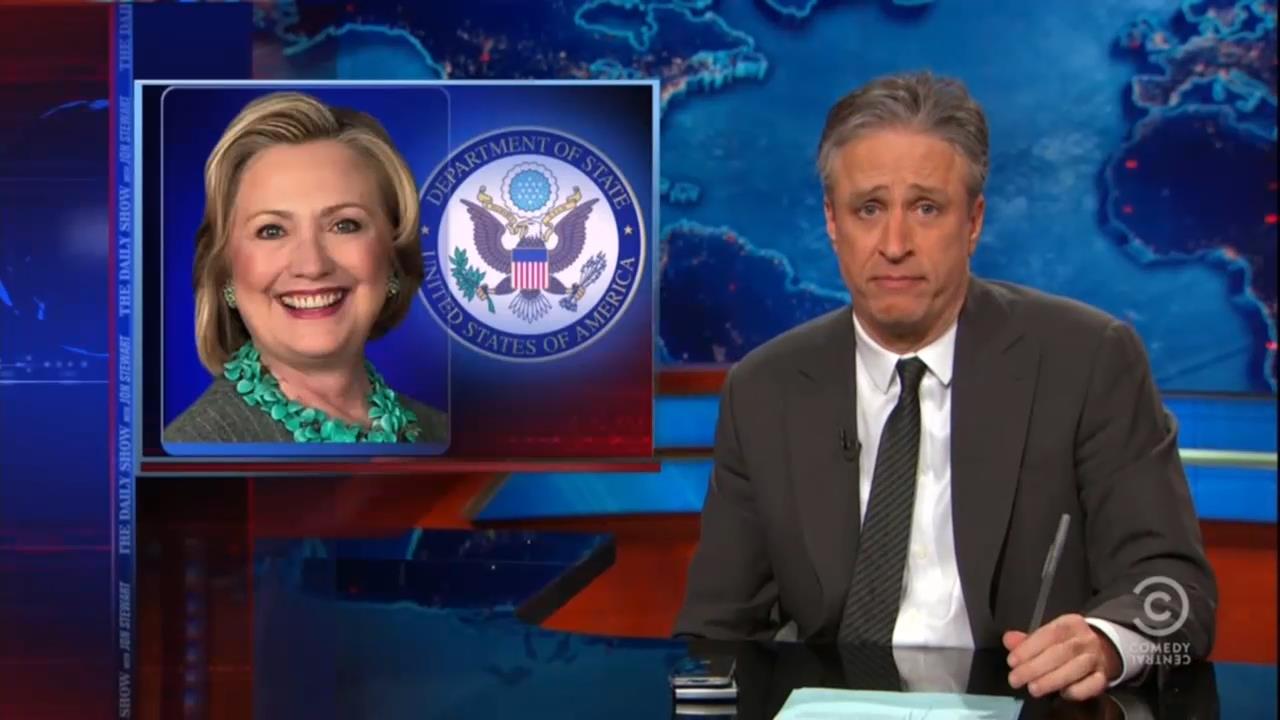 Stewart then compared what Clinton did to the person who initially agrees to separate recyclables, then doesn't follow through, a joke that fell flat. Clinton directing her "counsel" (uh, lawyer) to conduct a "thorough" investigation (following specific parameters that she established), along with her annoying use of the royal "we", made for more inviting targets.

After this brief detour, Stewart zeroed in again where Clinton is vulnerable --

STEWART: So just for funsies, why don't you let somebody who doesn't work for you look through those personal emails just to see if you missed anything?

ABC NEWS REPORTER JONATHAN KARL (shown in previous news report): Clinton said that after she went and organized her emails, determining which ones were official business to be sent over to the State Department and which ones were personal, that she deleted about 30,000 emails that she determined to be purely personal.

Stewart, looking dumbfounded, mutters a profanity. Then over to the alleged rationale from Clinton at her UN press conference --

CLINTON: I didn't, uh, see any reason to keep them.

STEWART: Anndd welcome back. You just told us you didn't follow the rules because having two separate email addresses would be way too big a pain in the ass. But you know what is a far bigger pain in the ass? Trying to delete 30,000 emails.

You may recall that Clinton made a chummy appearance on The Daily Show last summer, schmoozing with Stewart during her lackluster book tour. Will Clinton return before he leaves the program at a still-unspecified date later this year? Stewart may have burned that bridge last night, though he and Clinton could eventually conclude that it serves both their interests for her to disarm him again.