Rush Limbaugh: If Obama Sought Third Term, Would Anyone Stop Him?

Prompted by a listener's call, Rush Limbaugh made what initially sounds exceedingly unlikely come across instead as still unlikely but not beyond the realm of possibility.

The listener's question -- even though the 22nd Amendment prevents President Obama from seeking a third term, what if he decided to remain in office after January 2017? 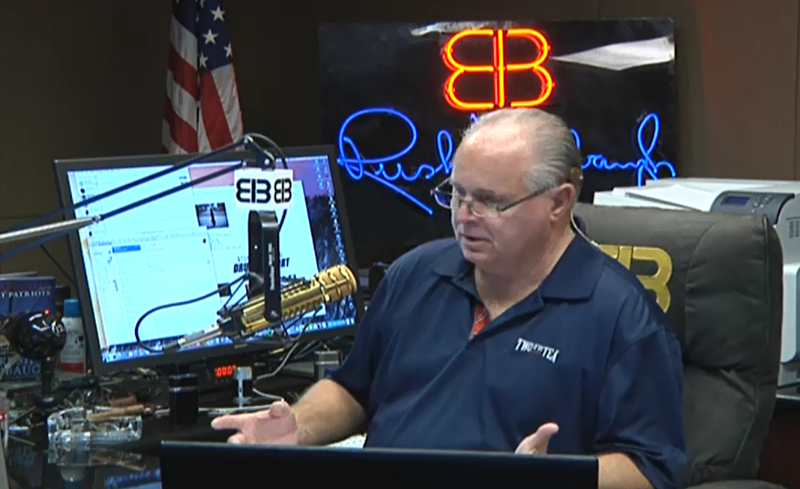 Let's put this in a scenario, because some of you might be thinking, all right, Rush, now this is, we're going too far now. I mean, now all you guys thinking Obama's doing this and that and he's violating the Constitution, but he would never -- well, let's construct a scenario and see if it has even the slightest bit of believability. And let's establish some things that we know to be true that Obama also knows and chief among those is that the Republican Party has said that impeachment is off the table, and more than once they've said this. The Republican Party has made it clear that they will not use that constitutional measure as a means of reining Obama in and maybe even getting him out of office.

They have also made it very clear in just the most recent vote on the funding for Department of Homeland Security that they will not use the power of the purse to stop Obama. OK, so those two realities equal Obama fully aware the Republican Party will take no steps to stop him in his ongoing violations, and running up to the edges, of the Constitution.

Now let's fast-forward to, say, May, June of 2016. Let's say that Mrs. Clinton has withstood all of this email stuff, Elizabeth Warren has not gotten in the race, that Al Gore took the temperature and decided not to go, that it's just Mrs. Clinton and Joe Biden. On the other side, the Republican field has a great list of possible candidates and they will have by that time engaged in a vigorous debate which may have served to educate the country on the foibles and the problems of the past eight years and the country may be looking forward to a dramatic change to Republican in the election of 2016. Obama fully aware of this would go on television and say that the Democrat field is so weak that he's not confident that Mrs. Clinton can win. He might even take steps to get her to, you know, to make sure she can't win, you know, sabotage her campaign, and then call a national speech to the nation in which his main point is that it's beginning to look like the Republicans will win the White House and this is something that he can't risk -- not after eight courageous years of transforming America, we just can't put it all to risk of being unraveled and undone by these racist, sexist, misogynist, whatever else Republicans.

And so as a service to the nation and to his accomplishments he is going to forget the 22nd Amendment and either not leave office or run for re-election himself as the Democrat nominee. Just imagine that scenario -- I don't care how unreal it sounds, how unbelievable is sounds -- imagine it. What would anybody do? What would Mitch McConnell do? What would John Boehner do? Mark Levin would have a heart attack, I would probably have an aneurysm, we'd be done (laughs). What would anybody do?! The Supreme Court would say, nobody has standing here, there's no case yet, Obama hasn't done anything yet. We can't do anything about this until he actually serves a third term and then you've got to bring a case to us.

What would anybody do if he says this? The media would be cheering it. Put all this in the mix. This guy's out there thinking about this. It's hard to believe, it's so unlikely, but don't think -- Obama's planning on staying in Washington part of the time, he's got a plan to continue to live in Washington after he has left office for that exact reason. Whoever the next president, Republican or Democrat, if that next president starts to unravel any of this, Obama's on television every night, he knows he's going to have the media in his back pocket, and whoever the next president is is not going to get away with anything without a huge fight from Obama.

What would the Republicans do? I think the odds are the Republicans might call an emergency constitutional convention and amend the 22nd Amendment, permitting Obama to do this, because their fear of being critical of Obama would destroy their chances of winning with the independents.

Limbaugh's being deliberately provocative, to be sure, and the scenario he describes remains difficult to envision.

First of all, GOP leadership declaring impeachment off the table is based on the assumption that Obama leaves office at the end of his second term. No other situation would so immediately galvanize and unite Republicans as that of Obama announcing plans to remain in the White House indefinitely. Articles of impeachment would be drafted the same hour as Obama's announcement, the previous assurances of McConnell and Boehner against impeachment having been rendered null and void.

As for who would stop Obama if he decided to run for a third term (as opposed to refusing to leave office), a specific group of elected officials comes to mind -- state secretaries of state, especially Republicans, who would cite the clear wording of the 22nd Amendment and refuse to put Obama's name on the ballot, depriving him of the legitimacy that would come from winning an election.

Obama remaining in Washington after he leaves office would break a century of precedent -- the last president who did this was Woodrow Wilson while on his deathbed. The Obamas have said they will stay in the capital at least until their younger daughter finishes high school -- but would they also shun their many handmaidens in the media? That's even more unlikely than the scenario painted by Limbaugh.