Ebony's senior digital editor was one of Al Sharpton's guests on MSNBC's PoliticsNation last night when the subject turned to a Saturday Night Live parody of a Super Bowl commercial.

In the original Toyota ad, a father is shown saying goodbye to his daughter at the airport as she departs for military service. In SNL's version, the girl is leaving to join a trigger-happy band of ISIS thugs.


Lemieux said she was not amused by the parody, and then gave the targets of SNL's satire exactly what they want --

SHARPTON: Now, many took to social media to criticize the ISIS parody for being in poor taste. But the SNL cast member who plays the dad (Taran Killam) tweeted, "Proud of this. Freedom to mock is our greatest weapon." Jamilah, is it funny or is it in poor taste? I mean, did it go too far? What do you think?

LEMIEUX: I didn't think it was funny, that's my personal opinion. What's good taste and bad taste can be debated, but I think about this -- is the risk worth it? My office is a block away from here on the other side of Rockefeller Center, so if somebody wants to retaliate for this, because we know that this is an organization and a group of people that are so committed to what they believe, and so against the idea of this freedom of speech that they punish us for doing things that we take for granted. I don't want to be sitting in the Ebony offices and lose my life because somebody thought it was funny to play fast and loose with ISIS.

Shhh! Everyone knows what short fuses they have! 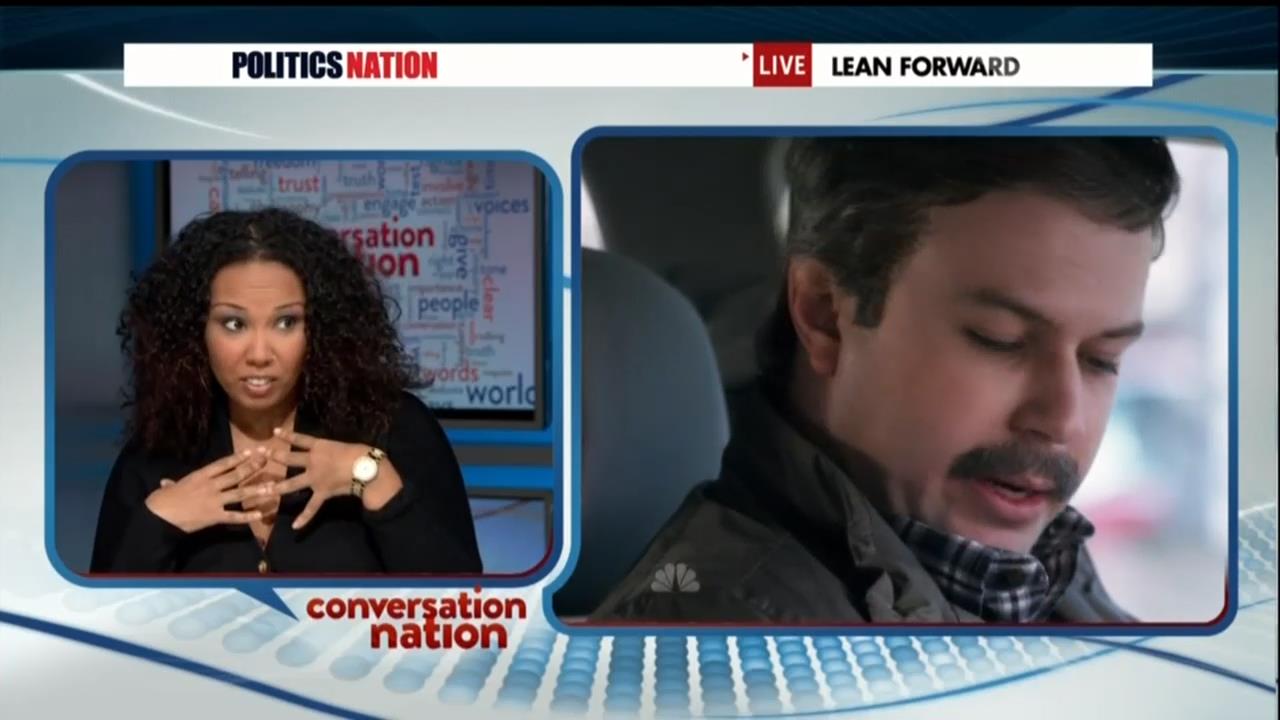 Doesn't the phrase "fast and loose" imply that SNL has done something dishonest?

Remarkably, not just one but both of Sharpton's other guests pushed back against Lemieux while Sharpton remained non-committal --

HUFFPOST LIVE HOST JOSH ZEPPS: But isn't this precisely the point? I mean, isn't that the whole point of free speech, that we can't allow the parameters of our national conversation to be dictated by the most violent voice in the room? It's a bit like the Sony hacks. I mean, unless we want to live in a world in which North Korea dictators and Islamist fascists are the ones who determine what we can and can't say, what jokes we can and can't tell, whom we do and do not mock, then the price of free speech is taking that risk.

Quite possibly the first and only time the phrase "Islamist fascists" will ever be uttered on MSNBC. Sharpton asked his third guest, Democrat strategist Tara Dowdell, about the "real question" --

SHARPTON: What about the families of people who saw their loved ones slaughtered by ISIS? How do they view this?

DOWDELL: Well, obviously this pushes the boundary of good taste, I think that's clear, but I would say this. The whole point, I'm agreeing with Josh here, the whole point of this is to mock ISIS and what they want is to make us scared, they want to instill fear in us, that's the point of terrorism. So this spoof, funny or not, it pushes back and shows we are not afraid. And so I think they want to drag us into war, Josh and I had this conversation earlier, they want to drag us into war, that's what they want, so this actually hurts them.

SHARPTON: Well, comedy's been poking at people a long time.

If Lemieux remains concerned for her safety, perhaps she can persuade other editors at Ebony to deem their offices a gun-free zone. In lieu of that, a prominently displayed designation of terrorist-free zone would be equally effective.