The weather has been so brutal in the Northeast this winter that those involved in preparations for Saturday Night Live's 40th anniversary special were apparently cut off from any news over the last two weeks.

How else to explain the show's laughable piety when it aired last night, and at the dead-whale weight of four and a half hours (including a red-carpet preview), and mocked what was deemed "fake news" from the Fox News Channel.

It came during the show's Weekend Update satirical news segment, anchored by former Not Ready For Prime Time Players Jane Curtin (an original from the show's early years), Tina Fey and Amy Poehler --

CURTIN: Over the course of Saturday Night Live's 40-year history, 11 films have been made based on its characters -- which adds up to a record-breaking 22 thumbs down!

CURTIN: Times have changed since I first sat behind this desk. For example, I used to be the only pretty blonde woman reading the fake news. Now there's a whole network devoted to that. (graphic shown of Fox News logo). And somehow I showed less cleavage. (photo shown of Curtin during '70s-era SNL, blouse open to reveal her bra, and Fox's Elisabeth Hasselbeck in low-cut attire).

It was just about then while watching last night, or perhaps during the interminable "Californians" skit, that I remembered why I stopped watching SNL on a regular basis 20 years ago. 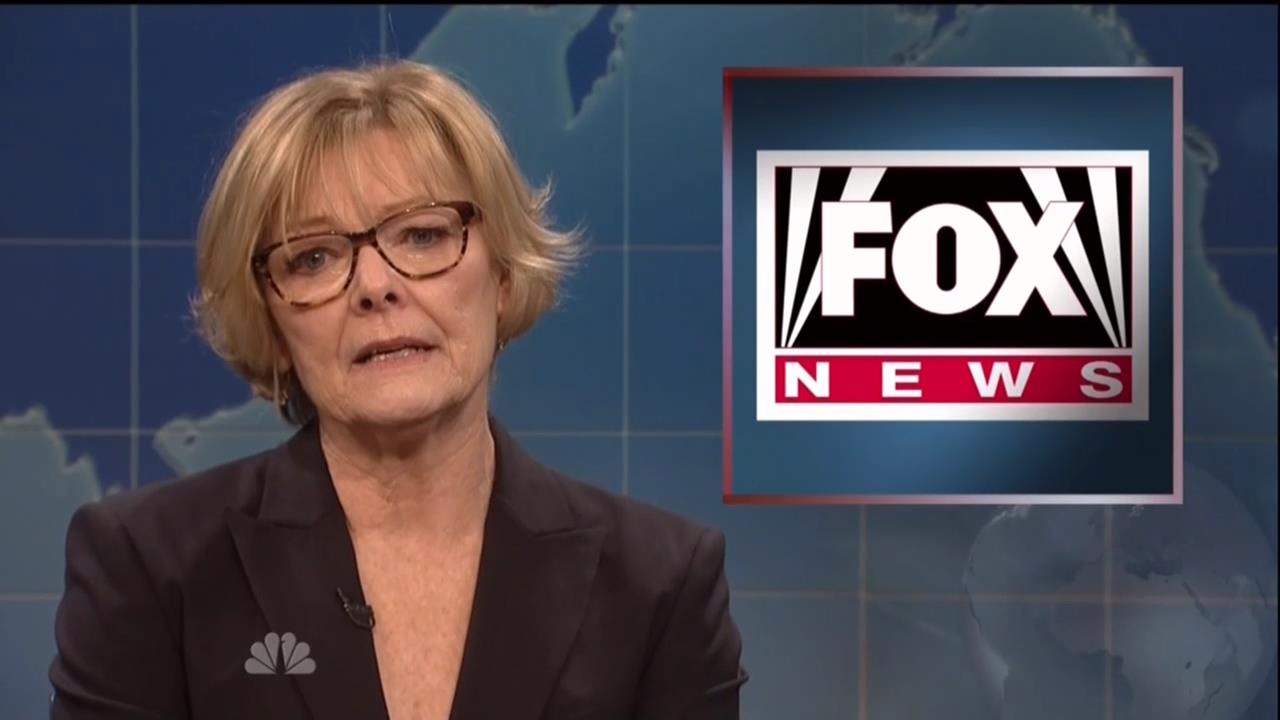 By dint of good timing, SNL managed to dodge the bullet of taking on or ignoring NBC anchor Brian Williams' penchant for telling tall tales to anyone within earshot, which finally caught up with him in a six-month suspension without pay that was termination in all but name.

The show was not broadcast on the first Saturday after evidence accumulated of Williams' repeated fabrications, followed by a re-broadcast a week later of the first SNL to air in October 1975. By last night's 40th anniversary special, five days after Williams' suspension was announced, it seemed unlikely that this elephant in the middle of 30 Rock could go unaddressed much longer.

Comic and actor Jim Carrey took the first shot, during the red-carpet preview, and asked Today hosts Matt Lauer and Savannah Guthrie, "Where are you hiding Brian Williams?" Lauer, glancing at his watch -- "Oh look at the time."

An hour into the festivities, former cast member Martin Short alluded to Williams by saying, "Do you realize that if this roof were to collapse right now, it would be the least of NBC's problems?" -- which managed to cite the scandal without piling onto Williams personally, since he wasn't specifically mentioned. Near the end of the show, Jerry Seinfeld quipped that Williams was one of the original Not Ready For Prime Time Players.

But it was Curtin who tried to divert attention from NBC News' eroding credibility by pointing the finger at the network's consistently higher rated rival. It was the funniest line of the night -- as measured by the laughter at Fox.