Appearing as a guest speaker at the Reagan Library in 2008, NBC Nightly News anchor Brian Williams was asked who his "wow interview" was with, or what person would fit the bill.

Williams tweaked the question before responding in a way that prompted an approving murmur through the audience, which presumably was what he intended.

"What was my wow?" Williams answered (22:15 in embedded video). "I've been so fortunate. I was at the Brandenburg Gate the night the wall came down. I chipped a piece of my own off of that wall and it's framed and hanging in my den with the next day's newspaper headline."

A report filed last night by CBSLA.com, the CBS television affiliate in Los Angeles, questions the veracity of his claim --

What Williams was referring to was the demolition of the Berlin Wall in 1989, but there are now reports that he actually arrived the day after the wall came down.

Williams' predecessor Tom Brokaw was the only American anchorman to report live from the scene on that historic day.

"If you lose credibility, I think you lose everything, particularly for the Nightly News," said Jessica Levinson, vice president of the Los Angeles Ethics Commission.

On Wednesday NBC suspended Williams without pay for six months -- in effect fining him $5 million -- for his discredited and admittedly inaccurate claim that his military chopper was forced down by enemy fire during the invasion of Iraq in 2003.

As CBSLA.com reported, Tom Brokaw was the only anchor of a major American television network in Berlin on Nov. 9, 1989 when the communist East German government began allowing its citizens, long imprisoned by the wall itself and its heavily armed sentries, to cross into West Berlin. Once breached, the Iron Curtain that had long separated Soviet-controlled regimes in Eastern Europe from capitalist democracies in the west quickly collapsed. 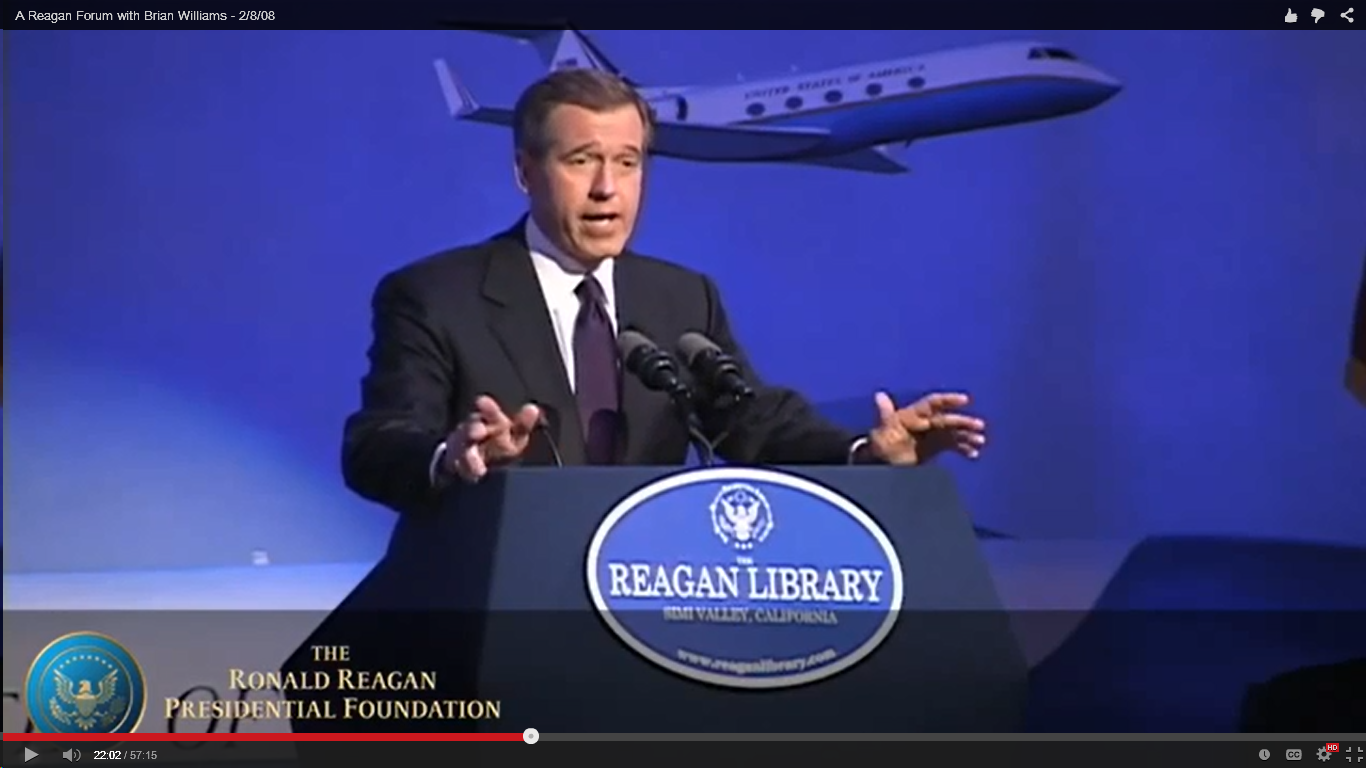 In his remarks at the Reagan Library, Williams made no mention of Brokaw, even though Brokaw's uncanny intuition in early November 1989 that he should travel to Berlin resulted in what was possibly the greatest scoop of his career. It would have been gracious of Williams to acknowledge this of his predecessor at NBC Nightly News. Instead, Williams put himself in Berlin on the night of Nov. 9, 1989 -- and at the Brandenburg Gate, a majestic 18th century arch and symbol of Germany situated in the kill zone between east and west Berlin, and epicenter of the reunified city's joyous celebration.

As if to reinforce his assertion about specifically when he was in Berlin, Williams said he returned home with a piece of the wall he had chipped off, which he proceeded to frame with "the next day's newspaper."

One can't help wonder if the venue where Williams made the claim, the Reagan Library, a shrine to the leader who was pivotal in ending the Cold War, had something to do with Williams citing this as his "wow moment."

According to his Wikipedia page, Williams worked at WCBS in New York City in 1987 until joining NBC News in 1993. At NBC he worked as White House correspondent during the Clinton years and anchor of the weekend news program. This past December marked his 10th anniversary as anchor and managing editor of the NBC Nightly News.