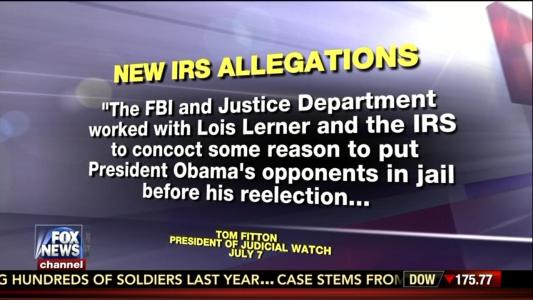 What’s it going to take for the networks to start seriously reporting on the IRS scandal again? On Tuesday, Judicial Watch announced the stunning revelation that newly discovered Department of Justice and IRS documents showed there was “an October 2010 meeting between Lois Lerner, DOJ officials and the FBI to plan for the possible criminal prosecution of targeted nonprofit organizations for alleged illegal political activity.”

This latest bombshell has yet to be reported on any of the Big Three (ABC, NBC, CBS) networks.

The July 7 Judicial Watch press release added: “The newly obtained records also reveal that the Obama DOJ wanted IRS employees who were going to testify to Congress to turn over documents to the DOJ before giving them to Congress. Records also detail how the Obama IRS gave the FBI 21 computer disks, containing 1.25 million pages of confidential IRS returns from 113,000 nonprofit social 501(c)(4) welfare groups  – or nearly every 501(c)(4) in the United States – as part of its prosecution effort.”

“These new documents show that the Obama IRS scandal is also an Obama DOJ and FBI scandal,”The FBI and Justice Department worked with Lois Lerner and the IRS to concoct some reason to put President Obama’s opponents in jail before his reelection. And this abuse resulted in the FBI’s illegally obtaining confidential taxpayer information. How can the Justice Department and FBI investigate the very scandal in which they are implicated?”

On Wednesday, The Washington Examiner’s Sarah Westwood, also reported on the latest twist in the IRS scandal:

Justice Department officials pushed IRS employees to hand over documents before they gave the records to Congress in 2013 as investigators were attempting to dig into the tax agency’s targeting of conservative nonprofits.

The Justice Department knew “that some [IRS] employees have assembled their own set” of documents for the congressional probe in preparation for their scheduled testimonies and told IRS officials it would be “helpful to obtain them” from the witnesses, according to emails published Tuesday by Judicial Watch.

“[W]e would like the unredacted documents,” an unnamed Justice Department official added in the July 16, 2013 email.

The new records, obtained by Judicial Watch through the Freedom of Information Act, suggests the Justice Department played a larger role in the IRS targeting scandal than previously known.
...
The records included a memo that described an October 8, 2010 meeting in which Lois Lerner, former head of the IRS tax-exempt unit, sought ways to press criminal charges against nonprofit groups that engaged in “political activity.”