Yet Another Flag: Vox Explains the Juneteenth Banner’s Origin

There’s a flag for nearly everything left-wing nowadays, and now the newly Biden-mandated federal holiday “Juneteenth” has one of its own. Vox reports the flag has been around since the 1990s, but of course, no one cared until now, as the left pushes the faux holiday upon all Americans. 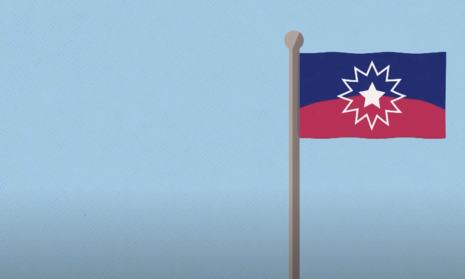 Juneteenth was christened as a federal holiday by no other than Joe Biden in 2021. The holiday falls on the anniversary of Union Forces reaching slaves in Southwest Texas in 1865 to deliver the news that they were finally free. The holiday, largely unknown outside Texas, came to national prominence during the Trump presidency, where it was used to attack Trump.

The creator of the flag, Ben Haith, told Vox that he was “just doing what God told me.” Apparently, then, God must have also told him that he should oppose a gay couple starting a foster home for two young boys in 1985, and God spoke through him when he said that it was “it ultimately as a breakdown of the society and its values and morals.”

The flag itself is nothing remarkable. A simple red and black bisected rectangle with a star and asymmetrical burst surrounding it. Some leftists, according to Vox, take issue with its use of the colors of America, instead of the pan-African colors, since America was the oppressor. The left eating their own, what else is new?