If you haven’t noticed, a lot of lefties don’t want to get back to normal. After a year of lockdowns, fear-mongering, and the imposition of mask-wearing as a “moral responsibility” to preserve the safety of others, the conditioning of the masses has been so effective that they have grown to love the shackles that bind them (masks). 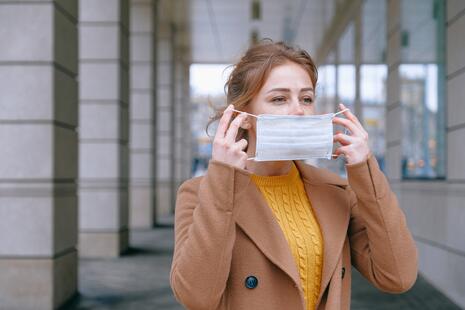 Some unfortunate feminists aren’t happy masks are being phased out, and not out of safety concerns, at least not relating to catching the current plague. The mask is now seen as a protective device from the “male gaze” or “invisibility cloak,” as one woman told The Guardian.

An InsideHook article by Kayla Kibbe titled “What Women Want: To Keep Wearing Masks To Thwart the Male Gaze” defines the extent of how brainwashed and sensitive the modern feminist has become. Apparently, the threat of being acknowledged by other human beings, or worse, encountering a person of the opposite sex who displays interest in one’s appearance, is so great a threat that women willfully mask-up, even after being vaccinated.

The Guardian quotes a Los Angeles woman who relishes the “emotional freedom” a mask provides her. Though vaccinated, she continues to wear one, explaining that “I don’t want to feel the pressure of smiling at people to make sure everyone knows I’m ‘friendly’ and ‘likeable;’ it’s almost like taking away the male gaze. There’s freedom in taking that power back.”

How pathetic. This poor woman would prefer to live in a sterile, faceless world so as to avoid some potential discomfort (or making an effort). That is not freedom. This woman’s dependency on the mask displays weakness, insecurity, and is a willful self-subjugation. Additionally, it attaches blame to men for simply existing in the public arena as it assumes every look holds malicious intent.

Why not a hijab? Why not go all out and wear a full burqa? Or get thee to a nunnery. Covering up for modesty’s sake is a worthwhile endeavor, but concealing one’s visage out of spite against men?

The mask as a feminist power symbol is both cringey and counter-intuitive. Women should be celebrating their beauty and femininity rather than feel compelled to cover up out of misplaced fear/hatred for men.

Masks are at once dehumanizing and coddling. Persistent mask-wearing even without the presence of health risk is indulging fragile, poorly-adjusted individuals to remain so. The dependency of those who are not eagerly awaiting the unmasking of America is irrational. Personal insecurities are preventing people from surrendering the mask as well as addressing and overcoming internal issues which create this reliance. Mask-wearing is fostering a sense of general distrust between and among individuals, and in this case, is being used by feminists as another way to demonize men.

As rapper Future so eloquently expressed,  “F--k it, mask off.”