On Saturday December 3, a Catholic campus ministry center at the University of Nebraska received a note from Jane’s Revenge, the now nationwide, pro-abort terror group. The note was a clear death threat against the center.

In chicken scratch type handwriting the note said, “If our right to abortion in Bellevue is taken away due to the attempt to pass an abortion ban and it gets passed[,] we will shoot up your Newman center with our new AR14 rifles. Sincerely, Jane’s Revenge.” 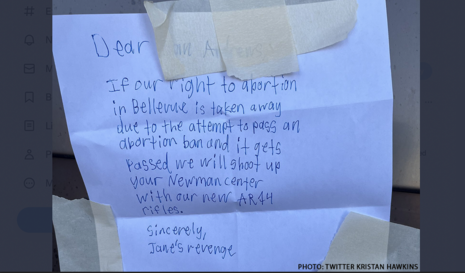 Students for Life president Kristan Hawkins posted an image of the note after her team arrived for a Political Leadership Workshop set up to help strategize for how to fight for life.

Hawkins also pointed out how much of a threat pro-lifers are under and how the Biden administration couldn’t care less. In a separate tweet she said, “We are headed towards tragedy if AG Merrick Garland continues to refuse to act to protect peaceful pro-lifers from pro-abortion terrorist groups.”

Unfortunately, Hawkins is right. The FBI has not only done little to nothing to stop the threat on pro-life groups and individuals but has instead extended their efforts to attack innocent pro-life individuals.

In mid-November, FBI director Christopher Wray admitted that 70 percent of the violence post-Roe is against pro-life groups. He claimed that the FBI is investigating the attackers but if they are, they’re doing a horrible job at showing it.

All the while, numerous pro-lifers have had their homes vandalized, been attacked in front of their children, and been arrested for essentially, being in support of life.

Not to mention, back in October, The Daily Signal reported that the FBI refused to share whether or not it has made ANY arrests related to attacks on pro-life centers, groups or churches since the Dobbs draft leak.

Catholic News Agency indicated that the University of Nebraska’s local sheriff's office and police department are “working together to investigate the threat and increase security measures” but given the tract record for things like this, it's a safe bet no significant action will be taken whatsoever.