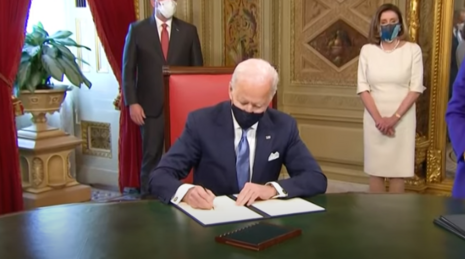 Biden announced Wednesday that he was reversing Trump administration limitations on Title IX and restoring the draconian gender and sexuality nondiscrimination enforcement favored by the Obama administration -- men in women’s bathrooms and women’s sports were the big issues. (But, just as important, the Obama guidelines denied due process to college men accused of rape or sexual assault.)

TERFs, the acronym coined by trans activists that stands for "trans-exclusionary radical feminist," (and conservatives) feel Biden is erasing the significance of being a woman and that their safety and success is at risk since, as the Twitter trend had it, #BidenErasedWomen.

Essentially, Biden’s trans-friendly order expanded the nondiscrimination protections of the LGBTQ community, prohibiting all workplace and educational discrimination against gender identity and sexual orientation. But, in addition to at least recognizing the existence of a right of association, Trump’s policy supported the difference between biological women and confused men.

Title IX was originally intended to ensure equal access and academic experience for women in higher education. But it has since progressed to locker rooms, bedrooms, and bathrooms, creating plenty of potentially uncomfortable (at the minimum) situations for women.

But the liberal overreach does real harm. In sports, for example, a biological male identifying as a “female” is inevitably going to beat out a real female if allowed to compete against her. As this situation gets more common (and the Trans industry very much wants it to) it will start depriving women athletes of scholarships, advancement opportunities, and honest victories. Biological men will dominate a sphere constructed solely for women.

Liberals claim to fight against male dominance --- ironic. This isn’t about inequality or being transphobic. It’s about taking away the honor of being born a woman.

Within hours of the inauguration two top trends on Twitter were “TERFs” and “#BidenErasedWomen.” This probably wasn’t the splash Biden was hoping for. For example, the account @WomenReadWomen tweeted: “Women standing up for themselves are called a dehumanizing slur [TERF]. By people who reduce our humanity to a regressive and sexist feminine fantasy.”

The @WomenReadWomen account pinned this tweet: “By woman they mean man, and by progressive they mean regressive. By gender they mean stereotype, and by queer they mean straight. By cis privilege they mean sex oppression, by living the truth they mean living a lie, and by acceptance, they mean submission.” They should keep it pinned for a while so the people in the back can see.

Journalist Sonia Poulton wrote: “I get called TERF because I believe women have a right to our own sports, prisons, refuges & spaces and because I believe children should be protected from people who seek to sexualise them and to confuse them about who they are.”

Another hashtag fan Bret Weinstein tweeted: “It’s not possible to provide protections for women if a man can declare himself a women and access the same protections. That’s not an opinion. That is a logical fact. Evolution endowed the sexes differently. Protections for women are just and must be defended. #BidenErasedWomen.”

Liberals are supposed to be all for female empowerment. Just look at the plaudits Kamala Harris got for being the first female VP. (Thanks for standing up for women on the Title IX thing, Kamala!) Do they not realize they take the special part of womanhood away by allowing anyone and everyone to identify as one at any time? Where does women’s empowerment go if anybody can just decide to be a woman? Obviously, it doesn’t take strength or power. Tomorrow, you can identify as a woman, too, and then go back again the next day, if you'd like.