It's been a tumultuous year for Maddi Runkles, the pregnant Christian teen who became a news sensation when her high school wouldn't let her walk at graduation. On Friday, ABC Nightline highlighted Runkles' story which culminated in a special commencement ceremony arranged by her pastor and family.

In the June 30 segment, footage showed Runkles at the podium, clad in a white graduation gown with tears in her eyes. "I want to thank every single person here," she declared emotionally. "If it wasn’t for you, I don’t think I would have been able to make it.” 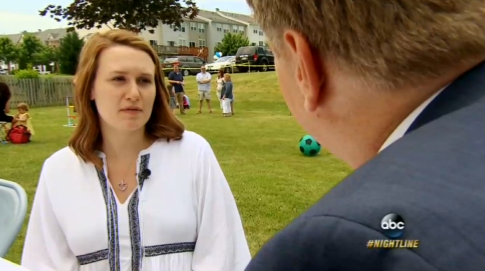 The expectant mother -- interviewed by ABC, CBS, NBC and Fox -- has had her fair share of the spotlight over the past couple of months. But despite the media's pro-abortion slant, the networks have been supportive of Runkles and respectful of the pro-life movement.

Devoting 8.5 minutes to an in-depth look at Runkles' story, ABC highlighted the fact that Heritage Academy's reaction to the teen’s pregnancy could incentivize other girls to abort rather than carry their babies to term.

"If I were another girl watching someone like me go through this," Runkles weighed in, "I think I would just run away and hide and cover up what I did and choose an abortion."

And she almost did. When the teen discovered she was pregnant back in January, she first considered abortion, fearful that her "reputation would be ruined." But after Runkles apologized to school officials and made the courageous choice to keep her baby, Heritage Academy did not show the compassion she had expected. Instead, among other punishments, a discussion of her missteps was the focus of an all-school assembly – a decision some felt was out of line.

Feeling rejected by many at her school, Runkles turned to the pro-life movement, which welcomed her with open arms.

“She has become a cause célèbre in the anti-abortion community,” ABC’s David Wright reported, noting that many pro-life activists have been “sharply critical of Heritage Academy's response to her situation.”

Students for Life President Kristan Hawkins is one of those who has censured Heritage for “shaming” Runkles.

“This is a question a lot of Christian schools have to grapple with,” she acknowledged, “holding our students to high standards, expecting them to live a life of chastity before marriage.”

“But then also,” she continued, “how do we love those who become pregnant?”

At St. Joseph’s Catholic Academy in Bowlsburg, PA, pregnant student Liz McNitt was celebrated for keeping her child and was even elected commencement speaker for her courage. Her counselor was supportive, and teachers thanked her for her pro-life decision.

For the activist, honoring Runkles’ courage and celebrating her choice to keep her baby was paramount. So the Students for Life president awarded the teen a college scholarship, and stood proudly by her side in front of cameras in newsrooms and behind podiums at rallies.

ABC Nightline featured MRC Culture’s footage from the #SockIt2PP rally, where Runkles gave a tearful speech about her inspiring story. Although the network did not feature the whole context of Runkles’ words, the teen criticized Planned Parenthood for its disempowering message that women “can’t do it.”

But the army of friends and strangers who have rallied around Runkles proves that with support, women can do it. 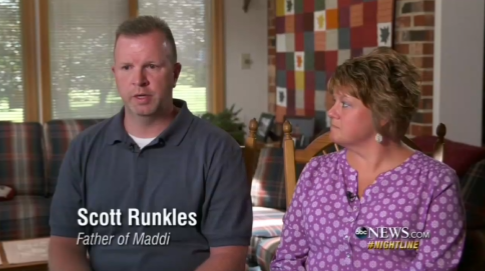 Friends and strangers have sent the teen baby clothes, books and supplies, and her graduation party doubled as a baby shower.

“I know what I did was not what I was supposed to do to get into the situation,” Runkles stressed, “but keeping the baby is definitely not a mistake. It was the right thing.”

Scott Runkles, Maddi’s father, expected that his daughter would marry a “good Christian young man” and have children at some point down the road, but despite the unexpected shift in plans, he’s thrilled to meet his future grandson Grayson.

“I know it’s going to be really hard to still accomplish all my goals and all my dreams,” she told the crowd assembled at the #SockIt2PP Rally. “But I get to have a little guy following right next to me and we get to do it together.”