For two Nigerian girls, tragedy spurred a desire to impact the world for good.

Joy Bishara and Lydia Pogu—abducted by terrorist group Boko Haram in April 2014—just graduated from Oregon’s Canyonville Christian Academy. From the bright smiles on their faces as they proudly displayed their diplomas, you’d never know the trauma they had overcome to get to that point. 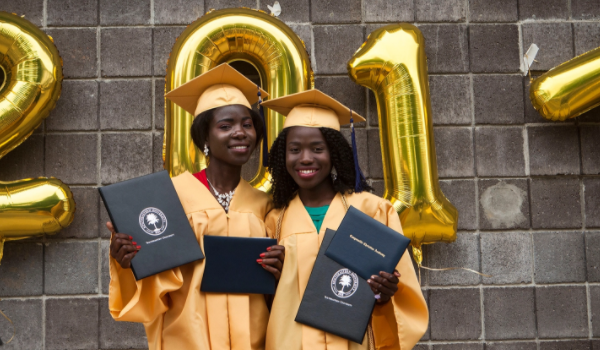 While attending boarding school in Chibok, Nigeria, the girls and more than 250 of their classmates were woken in the night to chants of “Allahu Akbar.” After burning the school, the Boko Haram terrorists marched the students to trucks and forced them to climb in.

Terrified but determined to escape, Bishara and Pogu resolved to jump off the truck under cover of the dust storm the vehicles had produced during the drive. After successfully accomplishing this, the girls ran and ran until a kind man took them in. Still fearing recapture, they managed to connect with a human rights group in Virginia – the Jubilee Campaign – and eventually made it to the States, where they avidly pursued their education.

“They’re determined to outwit their captors by turning their grisly nightmare into something hugely triumphant.”

In the fall, both girls will attend Southeastern University in Lakeland, Florida. Pogu wants to be a lawyer to be a voice for the voiceless, and Bishara aspires to be a doctor to save people’s lives.

During her graduation address, Bishara spoke beautiful words of hope and forgiveness.

“I forgive the people who hurt me,” she said. “I have nothing against them. I am praying for the return of my classmates to their parents.”

Is the Media Missing the Real War on Women?

Human interest stories like Bishara and Pogu’s are bound to get media attention, but in the three years since Boko Haram first captured the Chibok girls, coverage of the situation has become increasingly sparse.

While American media focuses on the so-called “war on women” here in the States, real human rights abuses like female genital mutilation, forced marriage, rape and abduction are happening to women across the globe. The media needs to talk more about the latter.

“This is a story that really kind of splashed across international headlines … when it originally happened,” Open Doors USA Advocacy Director Kristin Wright told MRC Culture of the Chibok girls. “And now, what have we heard from this over the last three years? Almost nothing.”

Although Boko Haram released 82 of the girls last month, hundreds of other abducted Nigerian children are still missing. In March 2017, Human Rights Watch Nigeria Senior Researcher Mausi Segun wrote that parents of the children had not heard anything from the government after they sent a list with names of all the missing.

This is an alarming fact, considering the sheer brutality of the captors, who kill or indoctrinate men and utilize sexual slavery as a “tactic of terror” against women, according to U.N. Secretary General Ban Ki-moon.

“Extremist groups are using sexual violence as a means of attracting and retaining fighters, and to generate revenue,” Ki-moon said at a June 2016 security council session.

Furthermore, they want the women they rape to become pregnant, in order to pass on their warped beliefs to offspring.

“These people have a certain spiritual conviction that any child they father will grow to inherit their ideology,” Kashim Shettima, the governor of Nigeria’s Borno region explained.

If the progressive media outlets talked at greater length about these monstrosities, what they perceive as the Trump administration's “war on women” wouldn’t seem quite so bad.