The LGBT community is anything but monolithic—after all, its symbol is the rainbow. But when it comes to political ideology, Republicans often feel left out.

While June is technically pride month, this year’s celebrations have focused more on resistance. And that, as NPR digital news intern Christianna Silva pointed out, has alienated many Trump supporters and right-leaning LGBT folks.

"There's no way in heck that I would attend L.A. pride because it's a resist march," transgender woman Gina Roberts told Silva. "Instead of celebrating diversity, it's the opposite of what pride stands for."

And indeed, the California city’s pride celebration was renamed “ResistMarch” this year, with participants toting "Love Trumps Hate" signs and singing: “We’re here, we’re queer, get that Cheeto out of here!”

Matthew Craffey, a member of the conservative LGBT group Log Cabin Republicans, expressed his disappointment that the pride march had become partisan. For a community that united over a collective feeling of isolation, this shunning of members with differing ideological views is alarming.

"I'm not discrediting people who have issues with the Trump administration, but my problem is that the Pride parade has always been political, but it's never been partisan," he told Silva. "So it's a missed opportunity for all of us to have a break from the division and the anger."

Things are so bad, in fact, that Charlotte's Pride Parade, scheduled for late August, rejected the float application of Gays for Trump -- ostensibly because of the organization's "history of public comments and stances disparaging entire groups of people."

But North Carolina resident Brian Talbert thinks his group's political affiliation was the cause.

"I never thought we'd get to a day where you'd have to fear being a Republican," he told Charlotte's local Fox station. "I've been told I can no longer be a part of the gay community, like they have some sort of power over that."

"We're members of the gay community, but we have the elite gays who want to stand up and say that they speak for us all," he continued. "We're here as living proof that they don't."

Because of the ostracism they know they'll face, republican Charles Moran thinks that many LGBT Trump supporters have felt compelled to lie about who they supported in the 2016 election.

Although an NBC poll revealed that Trump received 14 percent of the LGBT vote, Gays for Trump President Peter Boykin believes the number is higher – around 25 percent.

The media doesn’t often highlight them, but LGBT conservatives are definitely out there.

"We exist. ... We're not some little small minority," Boykin told Silva. "I'm pretty damn sure there are more gays who voted for Trump but won't admit it." 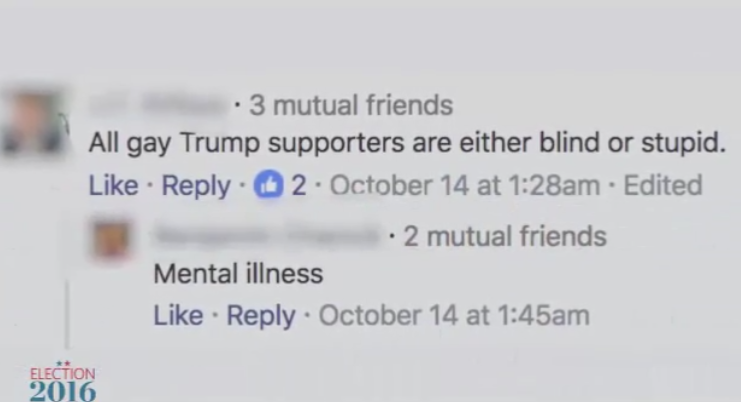 In Craffey’s opinion, LGBT people should be able to feel good about voting for either party.

“We should each be fighting to make our side better,” he opined. “We're just doing it in different ways and from different perspectives …You get a lot more accomplished from engaging than resisting.”

From her conversations with them, Silva concluded that right-leaning LGBT folks “define themselves by other identities and values before their sexual orientation.”

Furthermore, some feel that their desire for equality and their support of conservative ideology converge in President Trump, who has aligned himself more closely with the LGBT community than other Republican presidents before him.

Yet, as it stands, many gay GOPers feel more reviled for their political beliefs than for their sexual orientations and gender identities.

In October, Wall Street Journal reporter Jason Bellini interviewed a gay couple at a Trump rally in Cincinnati who were lambasted by sexual minority groups as “paid a—holes” and told to “drink bleach.” The duo said that none of the other rally members bothered them.

Ultimately, LGBT Republicans just want their liberal community members to be sincere in their promotion of a rainbow of perspectives and orientations.

"If we are a community who celebrates diversity, that has to include political diversity as well,” Craffey explained to Silva. “I'm fighting as much for my friends on the left ... as I am for the people in my group and myself."