Pundits Snipe at Melania’s DC Move: ‘Has Anyone Ever Looked More Miserable?’

Now that the school year is over, Melania and Barron Trump have officially moved into the White House. Unsurprisingly, several media people were quick to assume an unhappy family reunion. 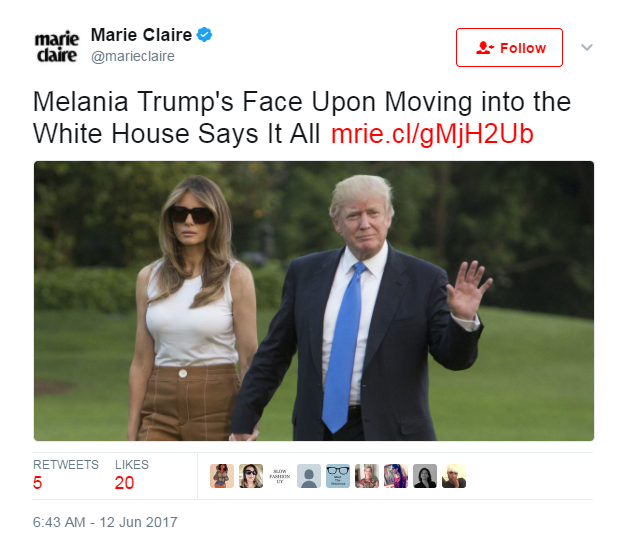 On the evening of June 11, Mrs. Trump tweeted her anticipation of the days she will spend at the presidential mansion. “Looking forward to the memories we’ll make in our new home,” she wrote, along with the hashtag “#MovingDay.”

But once a photo taken of the trio disembarking from Air Force One began to circulate, several media and entertainment folks quickly jumped to conclusions about the tenor of the reunion.

Ellen show producer Andy Lassner tweeted the pic with the caption “This photo really captures their joy,” while Nell Scovell added: “Has there ever been a family that looked happier to be reunited?”

“Has anyone ever looked more miserable?” Bonner continued in her sub-head.

On the June 10 episode of Jimmy Kimmel Live, the eponymous show host added his take on the transition.

“Speaking of controversial moves, Melania Trump is finally moving into the White House next week,” Kimmel announced amidst laughter from the audience. “They broke the news to her yesterday. She's taking it pretty hard. She does not seem to be excited about leaving her penthouse in New York to move into what is essentially public housing.”

“I guess the president finally managed to lure her there by replacing – you know Michelle Obama has a vegetable garden. He replaced it with a Bergdorf good man store,” Kimmel continued. “Now she's in. So be brave, Melania. You're going to get through this. With any luck in three to six months you will be out of there.”

“Is there anything as touching as a family reunited?” Cote questioned. “Melania will once again share living quarters with her dearly beloved spouse.”

“The First Lady has, however, at least feigned happiness on social media,” Cote continued, linking to Mrs. Trump’s tweet.

Just gonna throw this one in here: Do families usually look thrilled after moving, especially when bombarded by photographers?

Melania may be unhappy with Donald Trump, but the media aren’t justified in assuming this based off of photos.